"We're Baghdad-ready": Inside the street gangs of Long Island 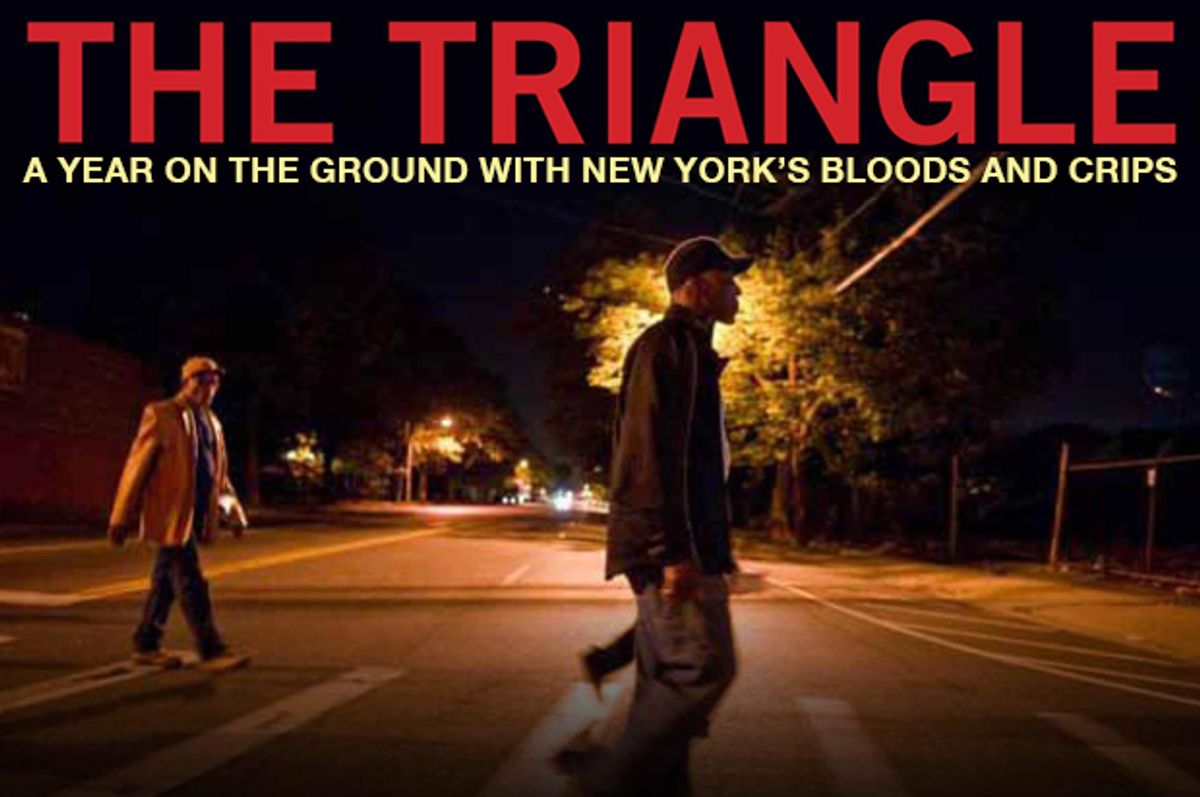 "There was a time, when I was growing up," Marsha Ricks, an 82-year-old resident of Hempstead, Long Island, told journalist Kevin Deutsch, "when this was a beautiful place. I guess my problem's always been that I kept seeing it that way, even after that world was long gone." She's only one of the hundreds of sources Deutsch would get to know and interview while writing his riveting book, "The Triangle: A Year on the Ground With New York's Bloods and Crips," and she's not even the most heartbreaking.

The stereotype of Long Island, New York, as a vast, affluent white suburb was never really accurate. During the 1950s, people of color moved into Nassau and Suffolk counties at twice the rate of whites. "We came here looking for the same things," Ricks explained, "safe streets, good schools, peace and quiet." In the past few decades, however, as big cities gentrified and their lower-income residents got pushed out into the suburbs, some of the newcomers brought with them the twin plagues of urban life: street gangs and the drug trade that funds them.

Deutsch, a criminal justice reporter for the Long Island newspaper Newsday, has been writing about these subjects for years. "The Triangle" recounts a bloody gang war that took place in the village of Hempstead during 2012. As Deutsch, who is white, explains in his closing chapter, "A Note on Sources," he began to cover the story by joining midnight prayer marches organized by a local minister (and reformed gang member), who led a small group around the neighborhood, coaxing gangsters, addicts and prostitutes into holding hands and asking God for better times. Eventually, Deutsch gained the trust of dozens of Hempstead's black residents, including the Crips and Bloods whose violent -- and almost always short -- lives he chronicles in this book.

"The Triangle" owes much to "The Corner: A Year in the Life of an Inner-City Neighborhood," the 1997 book by David Simon and Edward Burns that would eventually become the inspiration for "The Wire." Gang life and the day-to-day workings of the crack trade don't seem to have changed much in the intervening 15 years. Entry-level gangsters work corners as touts, lookouts and runners. The gang's leaders and hitters (trained assassins) drop by now and then to keep an eye on things, but mostly sequester themselves at home or in a "clubhouse" apartment. Each gang controls a collection of corners, and in 2012, the Hempstead sets of the Bloods and Crips -- nationwide but loosely affiliated gangs -- fought over territory in and around a neighborhood called the Linden Triangle.

By the end of the year, 56 people had been shot, 40 of them within Hempstead, putting the town "among the most dangerous suburban municipalities in the country," according to Deutsch. Ten died and three more were fully or partially paralyzed. Neighborhood residents learned to avoid the sidewalks and keep their windows shut. The bystanders injured included a child who lost two fingers to a bullet as he lay in bed reading "The Cat in the Hat." The dispute was subdued when the Crips crushed the Bloods by luring their two leaders into an ambush under the pretense of arranging a truce. Nevertheless, "The Triangle" closes with a resurgence of the Bloods aided by another gang, the Very Crispy Gangsters, who had clashed with the Crips over corners in Brooklyn.

Many aspects of this story may sound familiar, but Deutsch wants to change the framework in which we view them. We should, he argues, recognize the ongoing Bloods-Crips conflict not as a series of isolated criminal incidents but as a 45-year war that has claimed 20,000 lives. He points out that fewer Americans died in the Iraq and Afghanistan wars than died in Bloods-Crips battles during the same period.

The gangsters refer to themselves and their comrades as "soldiers," and the similarities don't end there. They share intense bonds with their fellow crew members, swear by a code that idolizes self-destructive courage and find an intensity of experience and purpose in "the game" that, despite its horrors, makes regular life pale by comparison. "If we wasn't shooting and grinding, what would we be doing?" a junior member of the Bloods asks Deutsch. "Ain't no other way to be. You put me in a quiet place, no beefs, no slinging, man, I'd go crazy. But all this craziness? This I know."

Deutsch also finds evidence of widespread PTSD in both the gangsters and the people unfortunate enough to live around them. One Hempstead resident, a former Marine and Iraq War veteran, told the author that he "felt right at home when I came back because there were just as many bullets and screams here as there were over there." The resemblance isn't lost on the gangsters either; "We Baghdad-ready," one Blood boasts while training for an upcoming showdown.

But the military isn't the only mainstream institution that the gangsters -- more specifically, the gangs' leaders -- compare themselves to. "We're looking to market, sell and profit off drugs the way any business would handle their product," the Crips' second-in-command tells Deutsch. "Only our product is illegal so more precautions have to be taken. It's all systematic and planned, all the positions and responsibilities and assignments. All of that's part of our business strategy."

It's apparent from Deutsch's in-depth reporting that in addition to being their community's most cruel and ruthless members, the heads of the Crips and Bloods sets are also some of its brightest. The Bloods' leader, called Ice in "The Triangle" (almost all of the names used in the book are pseudonyms), had a BA in accounting and even worked in the finance industry for a while, but said that in his legit jobs he'd been little more than, in Deutsch's words, a "glorified gopher who fetched their coffee in between menial assignments." He was eventually laid off. "I was not allowed to work at the level I was capable of," Ice told the author; "because I'm black, I was seen as less capable." Retreating to his mother's place in Hempstead, he fell in with his old friends and rose to a leadership role that won him responsibility, respect and an income of $700,000 a year. Ice likened his set's beef with the Crips to "some corporate fight you'd read about in the Wall Street Journal."

Ice was also smart enough to know that he'd end up dead or in prison if he didn't leave the game, even if leaving also meant abandoning his home, the younger Bloods who looked up to and relied on him and the rest of his friends to flee in a distant city. He wasn't the only gangster Deutsch met who contemplated an escape, but even someone with Ice's resources can slip into a fatalistic mentality, unable to conceive of a life outside the gang's brutal honor code of violence, loyalty, power and revenge. Besides, this is a world where one foolish teenage impulse, like wanting to make enough money to take your girlfriend out for a nice dinner, can dictate the course of your life. Once you're in, the game is hard to leave even when you decide to try. A former Bloods higher-up actually did make it out of Hempstead with the help of Marsha Ricks' son, landed a restaurant job in New Jersey and had plans to attend college. Earlier this year, his body was found, shot in the head, on a snowy street.

Street gangs typically get depicted in news reports as unfathomably aberrant monsters, but the closer look Deutsch offers reveals them to be a harsh mirror held up to the ruling classes. It's true that the Bloods and Crips thrive on selling a product that destroys lives and guts communities, but the same could be said for outsourcing corporations and the peddlers of mortgage-backed securities and other instruments of the recent financial collapse. One of the few grimly funny interludes in "The Triangle" describes how the gangs engage in branding and marketing, repackaging the same crack under different names (including "Occupy" and "Obama"), each with its own clever catchphrase for the touts ("Pass me by, you won't get Air Force One high.")

It's appalling that the gangsters regard the accidental shootings of bystanders as, in Deutsch's words, "the cost of doing business," but that attitude is not so very different from the U.S. position on drone strikes -- i.e, that such collateral damage is regrettable, but we must defend ourselves. Even more horrifying is the admission made to Deutsch by many Crips and Bloods that "women and young girls are routinely raped because their boyfriends or male relatives owe the gang money for drugs or guns," or as retaliation in one of the gangs' many beefs. But as Nick Turse wrote last year, we will probably never know the full extent to which rape is used in war -- and, yes, that includes by troops on the sides we favor. We have, however, just learned that our own government practiced sexual assault as an interrogation technique.

It's not lost on the gangs that they're part of one of the most unregulated free markets around, where the line between competition and outright warfare has completely dissolved. They inflict more direct and visceral damage than dueling CEOs, but they suffer more of it as well. They also know something else the rest of us would do well to remember: that our corporate masters are no less heartless and self-serving just because they enjoy the luxury of carrying on their predations within the law.