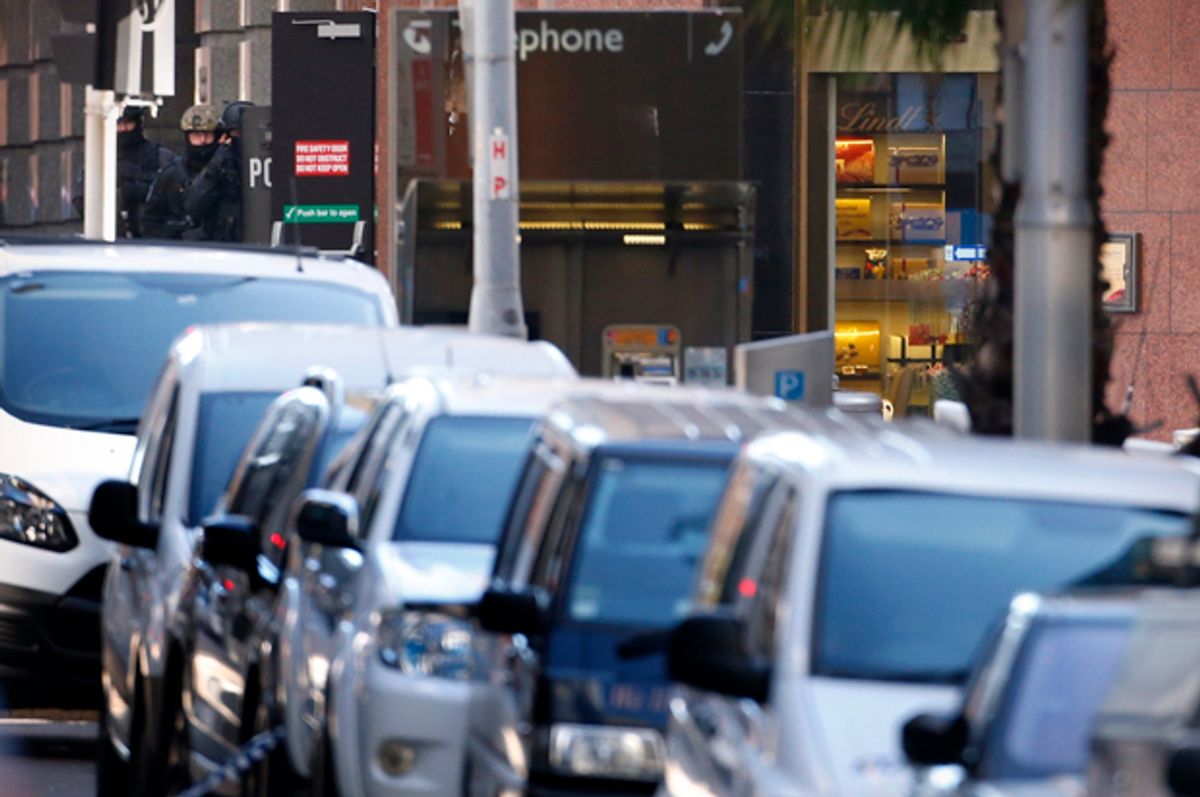 Police officers position themselves near Lindt cafe, where hostages are being held, in Sydney, December 15, 2014. (Reuters/David Gray)
--

It was only a matter of time before Uber's controversial surge pricing policy -- the company's system for automatically jacking up its ride prices in response to any spikes in demand – would make it look even more callous and clueless than it already does. But it took a particularly tone-deaf announcement in the midst of the still unfolding Sydney hostage crisis to really hammer home the ugliness of its knee-jerk capitalism mode.

Uber claims its surge system assures that it exists to "get more cars on the road and ensure reliability during the busiest times," but consumers complain that they find themselves charged up to "eight or nine times a ride’s base fare" just because it's, say, raining or crowds are getting out of a sporting event or concert. Still, it's one thing for a policy to be ethically, even legally questionable during normal times of increased demand. It's another to go into that mode the way Uber initially did this weekend -- while the patrons of a Sydney Lindt cafe were taken hostage by an armed man purporting to be affiliated with ISIS – and the crowds outside were rushing to leave the central business district as police cordoned it off. Uber has now come under heavy criticism for initially charging up to four times the usual rate because, as its app informed customers, "demand is off the charts." A customer sent Mashable a screenshot of an airport fare that would normally be less than 100 Australian dollars going for $145 to $185.

To be fair to Uber, its price hiking system is automatic – as demand rises, so do fares. And the company has since reversed its position and is now offering Sydney customers in the area of the hostage drama-free rides -- and promising refunds to those who'd been charged more. A spokeswoman announced Sunday, "Uber Sydney will be providing free rides out of the CBD to help Sydneysiders get home safely." But because apparently nothing can ever get done anymore without first doing it the wrong way, Uber's initial public statement on the crisis was that "We are all concerned with events in CBD. Fares have increased to encourage more drivers to come online & pick up passengers in the area." The reversal came 40 minutes later – with the additional info that "Higher rates are still in place to encourage drivers to get into the CBD."

You'd think a company with such global reach would have figured out a better -- and more humane -- system for emergency responses by now. Two years ago, the company came under fire, and was eventually ordered to cap its fares during "abnormal disruptions of the market" in New York City after it used its surge pricing on customers in the wake of Hurricane Sandy.

Meanwhile, real and human Australians have begun expressing both support and offers of public transportation accompaniment to Australian Muslims who may feel now unsafe, via the hashtag #IllRideWithYou. It's a straightforward message of solidarity and strength, and one that shows that it's really not hard, in a terrible situation, to do the decent thing. To remember to share the road. And that self-interest doesn't have to be the default along the journey.