Along with great cocktails, the Patterson House has rules. That's why I love it

No cellphones, no name dropping, no fighting. You leave with the person who brought you. What kind of bar is this? 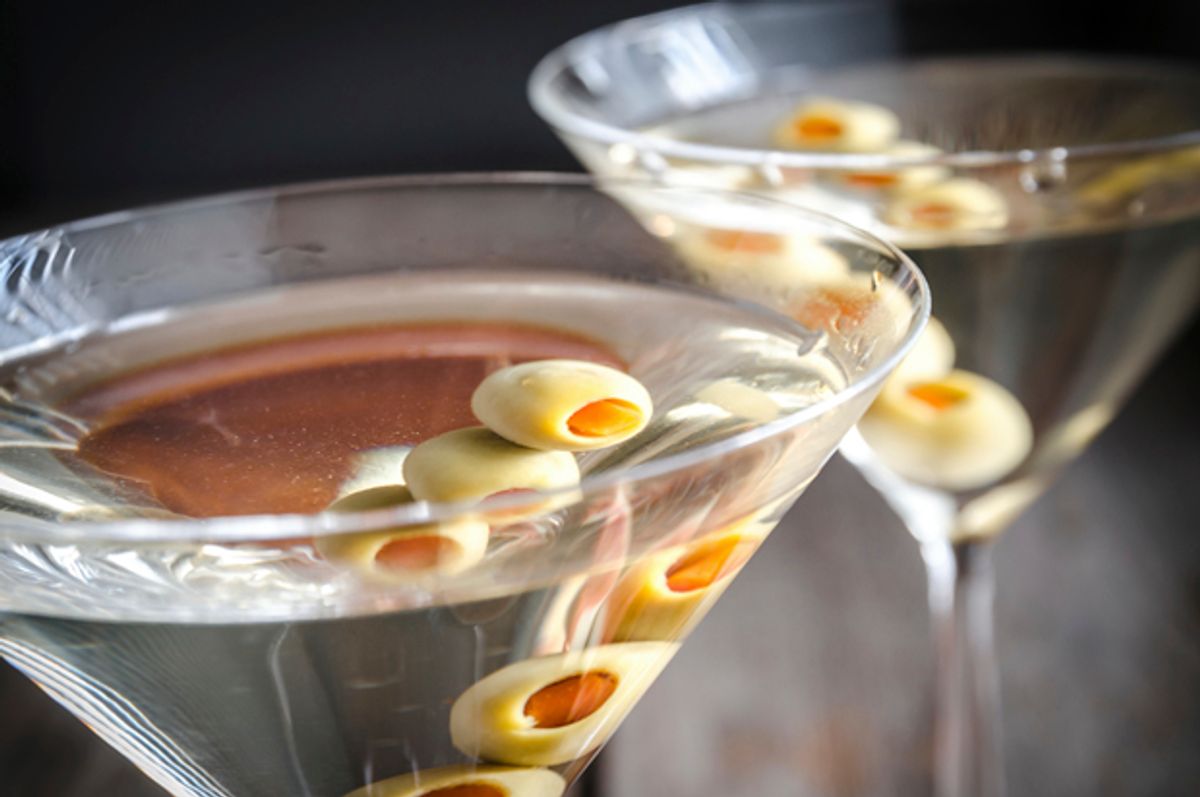 Like any great city, Nashville has her share of legendary bars. The unapologetically divey Bobby’s Idle Hour on Music Row is a must-visit venue for aspiring songwriters who want to pound beers, have a game of pool, and play at the Thursday evening songwriter’s night in the same hallowed space as former regulars Rodney Crowell, Kris Kristofferson, and Emmylou Harris. Meanwhile, any visit to the honky tonks on Lower Broadway demands a stop at Robert’s Western World for some two-stepping and PBRs. Crossing the Cumberland River to East Nashville requires a visit to both 3 Crow Bar (a great place to watch football) and Family Wash—the suds at this former laundromat are no longer soap—especially on Tuesdays, for the ever popular $10 Pint & Pie night. The number of universities within our city limits has also earned us the designation of The Athens of the South, and any authentic Nashville bar crawl merits a few rounds at the college hangouts in Hillsboro Village, including the smoky Villager Tavern for ice-cold drafts and a game or two of darts. (See if you can find any of your friends getting loose on one of the billions of snapshots decorating its walls.) I nearly wrote about the Hermitage Hotel’s Oak Bar since it’s the Tennessee legislature’s hangout when it’s in session and a nexus of political gossip and intrigue. It also boasts Nashville’s (and some say America’s) most beautiful bathroom: a green and black Art Deco design with toilets that look as if they were made in the Emerald City. It’s designated for men but unisex visitors are welcome to take a peek.

But ever since its opening in 2009, The Patterson House has become my go-to place to start the night or bring out-of-town visitors. It’s the brainchild of thirty-somethings Benjamin Goldberg and his younger brother, Max, arguably the city’s most influential restaurateurs, the pair responsible for bringing some of the finest and coolest dining establishments to a city whose Achilles’ heel was long its culinary and bar scene. Since opening Bar 23 back in 2003 in the then-emergent Gulch neighborhood, the Goldbergs have launched the already nationally recognized Catbird Seat restaurant, as well as Paradise Park, the live-music venue City Hall, the beautifully refurbished Merchant’s, and Ariel, not to mention their most recent venture, the wildly buzzed about Pinewood Social, a multi-functional space that’s part coffee house, part restaurant/bar, part bowling alley and—I’m serious—part swimming pool.

It was here that the elder Goldberg and I sat down to talk about Patterson House’s five-year anniversary, which most reporters and critics covering the Nashville restaurant and bar scene no doubt considered unlikely when it opened. Modeled after New York’s Milk & Honey and Chicago’s The Violet Hour, The Patterson House was, in Goldberg’s words, “a place where we could bring the processes and thoughtfulness of a great kitchen into a bar.” Because it was also the first place in Nashville to charge $11 for a cocktail, “no one,” Goldberg said, “thought that was a good idea at the time.” But facts are facts: when Nashville made the cover of The New York Times last year, it was as a national hot spot for food and culture. Yet half a decade ago it was The Patterson House that was on the tip of the city’s culinary spear. That it’s thrived is a testament to the Goldbergs’ vision of what kind of culinary city Nashville could become, or the kinds of places to which Nashvillians would come if you built them.

I’m a big fan of the bar’s rules, which I’ll go through one by one, albeit not in order, since they give the best idea of the place.

1. Please refrain from using your cell phone for anything other than texting in the bar area.

This doesn’t mean you can’t talk on your cell phone outside the bar area, a large foyer lined with book-filled shelves and enough seating and standing room to comfortably accommodate twenty. The far wall is dominated by a mantel, atop which sits the framed portrait of the man from whom the bar derives its namesake, and reads as follows:

From 1907 to 1911, Malcolm R. Patterson was elected to the governorship of Tennessee. During his second term, Patterson vetoed the return of statewide Prohibition, arguing that the issue should be decided at the local level rather than by the state. In a rare instance for the era, his veto was overridden by the state legislature. “For a state . . . to attempt to control what the people shall eat and drink and wear ... is tyranny and not liberty.”

Liberty may be celebrated here, but management is tyrannical. You’re greeted by a hostess, who takes your name along with the size of your party. Patterson House unwaveringly abides by the first come, first served policy. It doesn’t matter if you’re Keith Urban, Nicole Kidman or Gone Girl author Gillian Flynn when I took her this past October. There are no exceptions and no reservations. In my experience, the wait usually runs somewhere between fifteen minutes to an hour, Monday through Sunday, unless you show up near closing time, which is three a.m.

The bar area is curtained off by ceiling-high gray velvet, its color matching the patterned tin ceiling. Its effect is the same as the one that separates first class from coach. You can’t help but glance through the opening whenever it’s parted. Life seems richer and certainly more comfortable on the other side. Also, it makes you want to stick around. Once you’re led to your seat, you find the cell phone rule isn’t hard to abide by: Why would you want your attention focused elsewhere, now that you’ve finally
arrived?

The emphasis at Patterson House is on not crowded, on not rowdy. No looking over meatheads to spot your posse. No date-distracting array of flat-screen TVs flickering from the walls. The room seats only seventy-eight patrons at a time—its several tables surrounding the four-sided bar. You don’t go flag the bartender or server. He or she comes to you. The emphasis is on service. Thus:

3. You must be seated to order a drink. No seat ... no drink. This is to ensure our servers can get your drinks in a timely manner.

The Patterson House’s mood, then, is decidedly mellow and intimate. It was designed by Landy Gardner, who does residential interiors, and he’s imparted to the place a hushed, becalmed feel. It’s your rich aunt’s library or coolest cousin’s old-fashioned study. Hanging between the tables are delicate chandeliers that look like inverted wedding cakes made of icicles. Bar to tabletop, the woodwork’s tones are the darkest chestnut interrupted by ivory and silver wallpaper, modern floral patterns that add an Art Deco touch to the space. The bar’s chairs, covered in black leather, are large and comfortable. Because the bar sits so high and entirely dominates the room’s center, Patterson House doesn’t lend itself to people watching. From the tables, you can’t see across the room, nor can you really be seen, which brings me to the next rule:

4. Enjoy the company that you keep. Men must refrain from introducing themselves to women, unless invited or introduced by a friendly party.

You leave The Patterson House with the person who brought you and the place is designed so that nothing interferes with that, although every time I’ve gone alone and sat at the bar I’ve always fallen into friendly conversations with the people adjacent to me.

5. Please be patient, each cocktail is hand-crafted, and quality takes time.

At the bar’s center, tiered like a ziggurat, are the several hundred arrayed spirits. Lining its base are the brown-glass eyedropper bottles of various handcrafted bitters and syrups that put you in mind of a turn-of-the-century apothecary.

The menu is long but not vast, comprehensive but not overwhelming. It’s organized by spirit: gin, rum, vodka, potable bitters, whiskey, agave, and brandy—all $12. (Ah, inflation. It’s as constant as death and taxes.) As well, there’s a limited wine and beer selection and an assortment of classic cocktails. But it’s the mixologists’ concoctions that make drinking here special, the menu tweaked quarterly in the bartenders’ lab—yes, they really have a lab—and subsequently refined during their weekly Mixology Monday meeting.

When I was recently there on a very cold December night, I ordered one of their new menu’s hot drinks, The Forest Fire: Old Forester bourbon, Falernum, maple syrup, and Laphroaig scotch. The lemon slice with which it was garnished was speared with cloves. The best way I can describe the concoction is that it tasted like I’d just French-kissed a dragon.

Not that you can’t get something cold. My Boulevardier, made with Russell’s Reserve six-year rye, Carpano Antica sweet vermouth, and Cynar (the Cristal of Camparis) was poured over an ice sphere the size of a cue ball. Patterson House makes its own ice daily, using a Japanese manufactured Taison ice mold at the rate of only one every four minutes. They go through 250 of these a day, so you do the math. Water content being essential to a great cocktail, the bartenders require ice with a larger, slower-melting surface area. True, it’s not efficient, and I’d hate to be the server responsible for the side work, but the difference in the drinks’ undiluted flavors is inarguable. Attention to detail like this is what makes The Patterson House truly great.

(And don’t even get me started on the food. The sage and rosemary pork rinds are made so fresh they continue to crackle and pop until you’re finished with them. The deviled eggs are the best I’ve had in the city, and we are on the buckle of the Deviled Egg Belt. The mini burgers’ short rib patties are served with Benton’s bacon, smoked cheddar cheese, bibb lettuce, and house aioli.)

“With Patterson House,” Benjamin Goldberg told me, “we wanted to be as good as possible at this one thing: making drinks.” I couldn’t help but think of this the last time I was there, listening to local band The Kings of Leon play over the sound system, followed by our equally famous transplant, Jack White. Like Nashville’s music scene, The Patterson House is not only great at one thing but much, much more.