From chess wunderkinds to the fake teen Wolf of Wall Street: A history of Stuyvesant High School "prodigies" 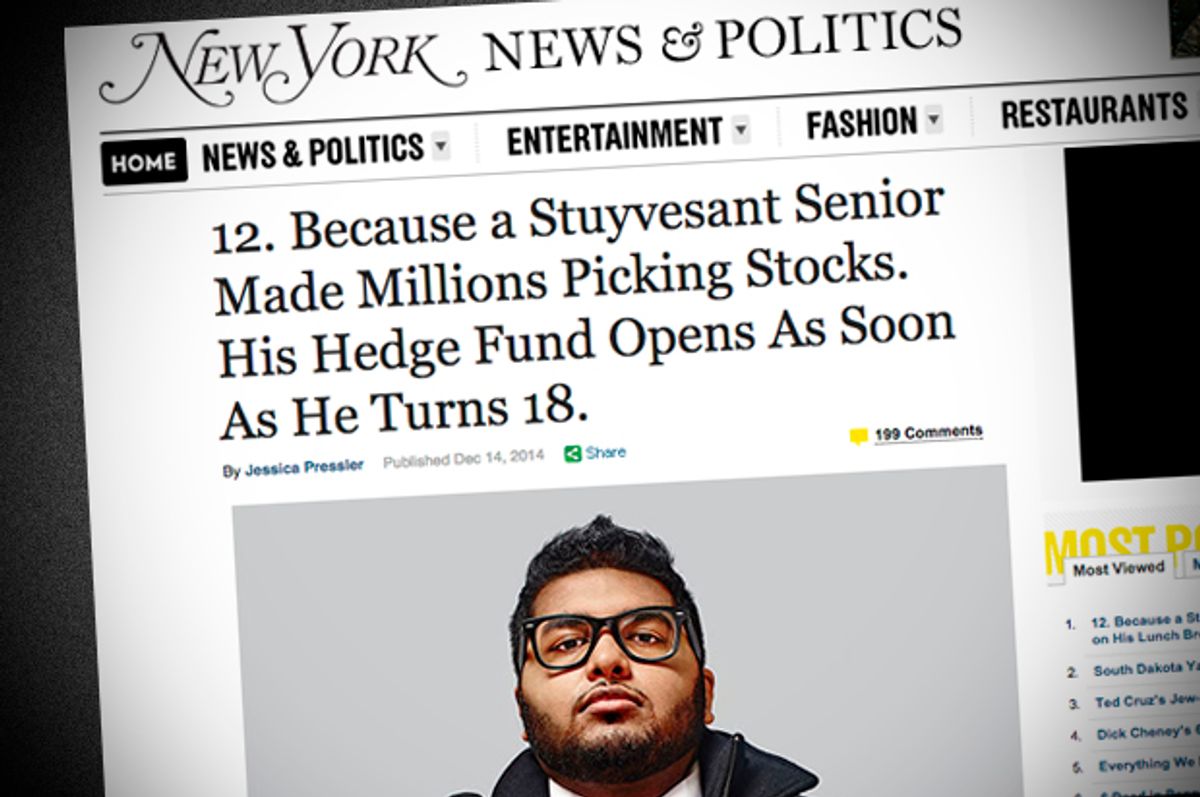 Today, the media is up in arms after a New York Magazine story about a Stuyvesant High School "boy genius" who allegedly made $72-million on the stock market was proven to be a hoax. A failure of reporting, to be sure; and yet, if you look at Stuyvesant’s history of producing prodigies, the story isn't really that hard to swallow. As Alec Klein writes in his book, "A Class Apart: Prodigies, Pressure, and Passion Inside One of America’s Best High Schools": "Stuyvesant remains the alternate universe of high school, where students are proud to admit they pull caffeinated all-nighters to study, where they don't want to leave school at day's end....While high school football is worshipped in places like Texas, the deities at this school near the southern tip of Manhattan are the science geeks and the math wonks, and if they don't win science and math championships, hell hath no fury like an over-involved parent." Stuyvesant has spawned as a wealth of less-flattering news stories over the years as well, from the huge 2012 cheating scandal to its failures of diversity. But perhaps no aspect of the school has been reported on so breathlessly as the school's seemingly endless reservoir of teen prodigies. A brief history:

2013: The twin titans
Ambitious senior Jack Cahn makes headlines for a political scandal after he fights back after being disqualified from the student council presidency for a number of small infractions. "Students call me every night, asking me to keep fighting. They’ve compared this to China, Russia, Venezuela," he tells the Times. "It’s my obligation toward those who supported me to keep standing up for what’s right."

In an interview that year, New York Mag calls Cahn an "Ambitious Al Gore–Tracy Flick Hybrid,” while another NY Mag profile of him and his twin brother David gives an inside look at the hyper-ambitious teens: "They have A averages; study Mandarin (they also speak Hebrew and Spanish); have lobbied successfully to audit a class during their lunch period and audited several others at New York Law School on their own time; have held national positions with the Junior State of America; are Huffington Post columnists; were intern supervisors for Congresswoman Carolyn Maloney; and have started a business, Guerrilla Joe, selling ad space on the sides of coffee carts throughout the city. Last year, they even squeezed in time for girlfriends."

2012: The worm genetics expert
The Times reports on a Stuyvesant senior called Mimi Yen who finishes third in the illustrious Intel Science competition: "Mimi, a Stuyvesant High School senior who lives in Brooklyn, spent two years after school and on weekends researching the genetics and mating behavior of a microscopic worm."

2010: The chess champ
The New York Post runs a story about Zachary Young, a “15-year-old Wunderkind” who received acceptances from Harvard, MIT and Caltech. As the Post writes: "Zach is a two-time national chess champion who doesn’t watch TV or listen to music. 'If I have a choice between math and almost anything else, I choose math,' he said."

2010: The "genuine genius"
14-year-old Stuyvesant student Milo Beckman tests a theory that students who write longer SAT essays get higher scores, and is proven right. "Milo's findings are exciting to me for the reason that any researcher is excited when somebody else takes their research and applies it in an innovative way and replicates it. Because it confirms my research,” MIT professor Les Perelman tells ABC.

Milo's genius has long been covered by the press. In a 2007 article about Stuyvesant prodigies featured in Klein's book, the Daily News writes: "When Milo Beckman was 10 he attended four math classes at the high school. That meant he unofficially qualified as a freshman. He's a genuine genius. Milo was 4 years old, maybe 5, when his parents discovered his spreadsheet of the solar system and found several chapters of a book he'd written. He and his older sister, Willa, took the entrance test for Stuyvesant last year. Milo said they found it easy."

2009: The other chess champ
The Times writes a piece on 17-year-old Robert Hess, an international chess master and Stuyvesant Junior: "Last year, at the Foxwoods Open in Connecticut, he earned the first of three norms necessary to become a grandmaster. Then he went back to school. Since then, he has competed sporadically, at least by the standards of an elite player, balancing grandmaster dreams with the requirements of an academically rigorous high school. He is taking seven courses, including Advanced Placement classes in history and French."

2008: The politicos
"Frontrunners," a documentary about Stuyvesant students running for student union president, prompting obvious parallels to the U.S. presidential election. “It was at Stuyvesant that I learned how to be a politician, and it was in their elections that I developed my abilities," says political consultant and Stuyvesant '64 graduate Dick Morris in the film.

2007: The not-your-typical-high-school-jocks
Klein’s “A Class Apart: Prodigies, Pressure, and Passion Inside One of America’s Best High Schools,” chronicles a number of the school’s rising stars: For example, Romeo Alexander, who is a football star and a math wiz. “Romeo is an archetype of the high school idol, a popular, powerful captain of his football team, except for one thing — Romeo Alexander is also a sixteen-year-old math wiz,” writes Klein. “He taught himself calculus by reading a tattered textbook. Then he got the top score on the advanced placement test and skipped a course in calculus to go straight into differential equations… not your typical high school jock." Or, as the New York Daily News puts it, "In his junior year, Romeo achieved a 97.5 grade average, tutored, played football and assisted on an NYU science project, among other things. On Dec. 15, 2006, he received word that he had gained early admittance to Harvard, making his mother's dream come true."