"The Hobbit: The Battle of the Five Armies": Peter Jackson's long goodbye to Middle-earth

What is it about prequel trilogies? Jackson's ungainly franchise ends with a bang -- but was it worth doing at all? 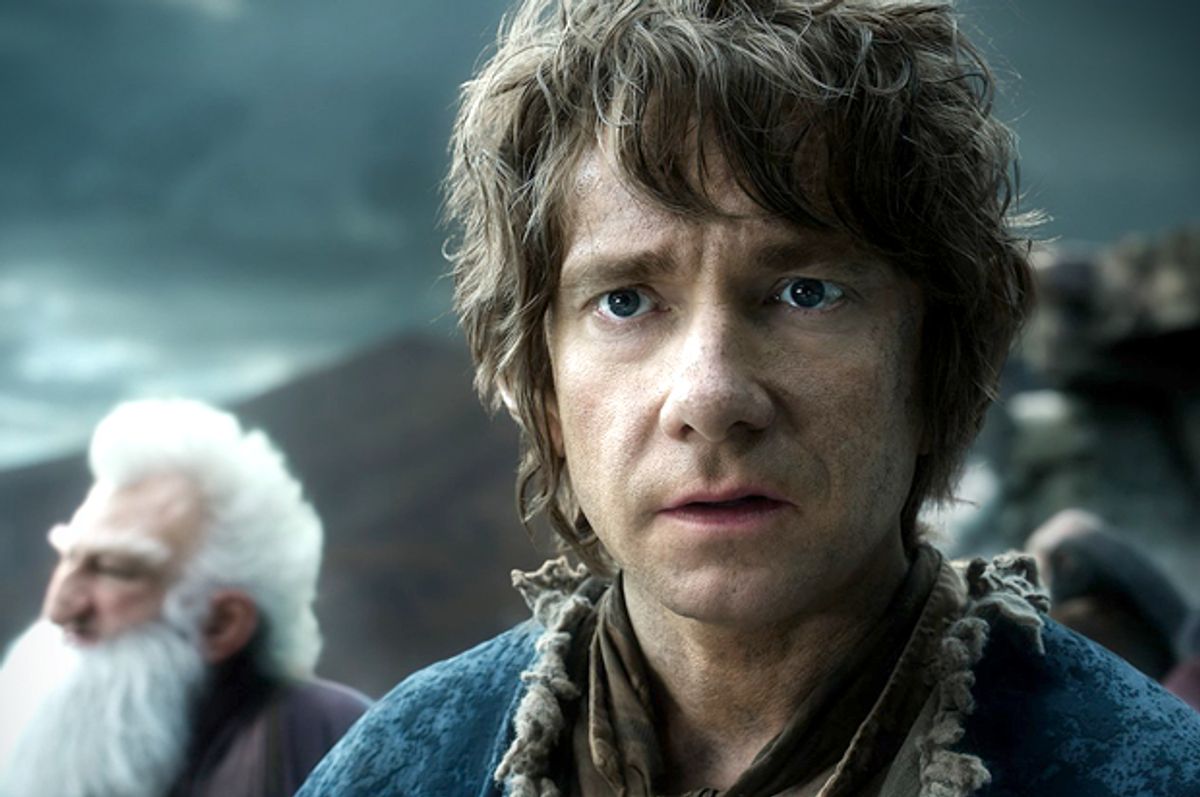 Martin Freeman in "The Hobbit: The Battle of the Five Armies" (Warner Bros. Entertainment Inc.)
--

Presumably everyone now understands that Peter Jackson’s bloated “Hobbit” trilogy has only an arm’s-length, tangential relationship with the classic children’s novel that J.R.R. Tolkien first published in 1937, essentially launching the epic fantasy genre that now dominates so much of popular culture. Jackson and his enormous team of co-writers and collaborators have appropriated the main plot points and characters of Tolkien’s original – there’s a hobbit named Bilbo (Martin Freeman), a wizard named Gandalf (Ian McKellen), a dragon and a gaggle of dwarves – but the affect and purpose of his trilogy, which now culminates with the impressive 3-D action spectacle “The Hobbit: The Battle of the Five Armies,” are quite different. As I said last time around with Chapter 2, “The Desolation of Smaug,” this is an “inspired by” movie, not a “based on” movie. These are laborious Lucas-style prequels to Jackson’s great achievement, the “Lord of the Rings” films, and as with “Revenge of the Sith” and so on, the world might be better off if they simply hadn’t happened.

If you’re as much of a Tolkien geek as I am, you will already know that Jackson has some justification for some of the immense poetic license he has taken. The presence of Legolas the Elf (Orlando Bloom), an important "LOTR" character never mentioned in Tolkien’s “Hobbit,” is plausible enough, since elves are immortal and not subject to chronological limitations. (And Legolas is the son of King Thranduil of Mirkwood, played by Lee Pace, who does appear in “The Hobbit.”) Radagast the Brown (Sylvester McCoy) is a wizard named in Tolkien’s books who never appears in person, but Jackson must take the blame for Radagast’s bunny-powered sled and the bird poop in his hair. There’s an entire subplot in the “Hobbit” trilogy about Gandalf’s secret campaign against a mysterious sorcerer called the Necromancer (voiced by Benedict Cumberbatch), and those events do occur during the “Hobbit” timeline, although they are not explicated by Tolkien until he gets to “Lord of the Rings.”

I feel frankly torn about a key question in considering the “Hobbit” trilogy: By what standard do we judge these films? Considered as contemporary CGI-driven action-adventure cinema, and as the template for a new generation of video games, they are rich and entertaining. Even in the decadent phase of his genius, Jackson remains an expert world-builder and image-maker. “Battle of the Five Armies” is frequently exciting and loaded with exquisite design elements, and you can feel Jackson reaching for a grand final note to his entire Middle-earth odyssey, as he brings the story full circle, almost to the opening of “Lord of the Rings.” On the other hand, we also get a noisy, splashy Marvel Comics-style fight sequence involving a whole pile of characters who don’t actually appear in Tolkien’s “Hobbit,” clashing swords and flinging zingers at each other. (“You should have stayed dead!”) And while we're at it, one of the “five armies” referenced in the title never bothers to show up at all.

So I’m not even sure how relevant or useful it is to mention the fact that Jackson and credited co-writers Fran Walsh, Philippa Boyens and Guillermo del Toro have made all kinds of changes to “The Hobbit” they didn’t have to, and where the reasons for doing so are not evident. Discussing these in detail would require giving too much away (especially for viewers who haven’t read the book in the first place), but I can say simply that major events like the fate of Smaug the great dragon (also voiced by Cumberbatch) and of Thorin Oakenshield (Richard Armitage), Dwarf lord and rightful heir to Smaug’s mountain kingdom and its hoard of jewels, are rendered quite differently here. With such episodes, and with the appearance of numerous monsters, creatures and characters not found anywhere in Tolkien, Jackson is drawing a line in the sand. This is his Middle-earth, not Tolkien’s; you almost get the feeling that Jackson is burned out on the late Oxford don’s dualistic universe. Every omission or elision Jackson made to the “Lord of the Rings” story was hotly debated, and he sought throughout to harmonize his world with Tolkien’s. This time around he’s doing as he damn well pleases: Forbidden Elf-Dwarf romance, giant burrowing worms, and somebody riding a giant elk into battle. Unless it’s a moose.

Sometimes this approach yields unexpected benefits: The “Hobbit” movies have traced a subterranean connection between Smaug the dragon and Sauron, the great fallen-angel nemesis of “Lord of the Rings,” and while Tolkien probably didn’t intend that, it makes a lot of sense. Once Thorin the noble Dwarf lord takes possession of the dragon’s tainted treasure trove, it begins to bend his will, turning him greedy and selfish in much the same way that the Ring Bilbo won from the slimy Gollum in the trilogy’s first chapter shapes its owner’s personality and destiny. In both cases a great evil power is at work, and ultimately it may be the same power. In one memorable sequence, Thorin appears to cast the dragon’s shadow and speak in the dragon’s voice, which is the same voice belonging to the Necromancer, who is revealed to be … well, never mind. If you don’t know yet, you soon will.

Freeman gets relatively little screen time as Bilbo in this final chapter, and the non-Thorin dwarves even less. One unfortunate side effect of the ways that Jackson has blimp-sized this narrative is that McKellen’s final performance as Gandalf finds this memorable and majestic wizard reduced to a jokey, ineffectual supporting character. Azog the Defiler (Manu Bennett), a scar-faced Orc villain concocted for these films, is arguably more prominent than any of the story’s supposed heroes. If we begin from the premise that the financial logic of Hollywood made this prequel trilogy inevitable, then it’s fair to conclude that Jackson has brought Bilbo home safely from the dire self-parody of the first chapter, and without fatally contaminating his “Lord of the Rings” movies.

That’s a pretty conditional endorsement, I know. If I had the power to turn back time and start the tortuous production process that led to the “Hobbit” trilogy over again, with a different director in charge and a completely different approach, I would do it. But that’s precisely the problem with the One Ring, right? Once you put it on you are changed, and those changes cannot be undone.