The tyranny of pop culture "musts": How I learned to love being out of the loop

"Serial"? Never heard it. "True Detective"? Sounds boring. On the joys of abstaining from cultural obsessions 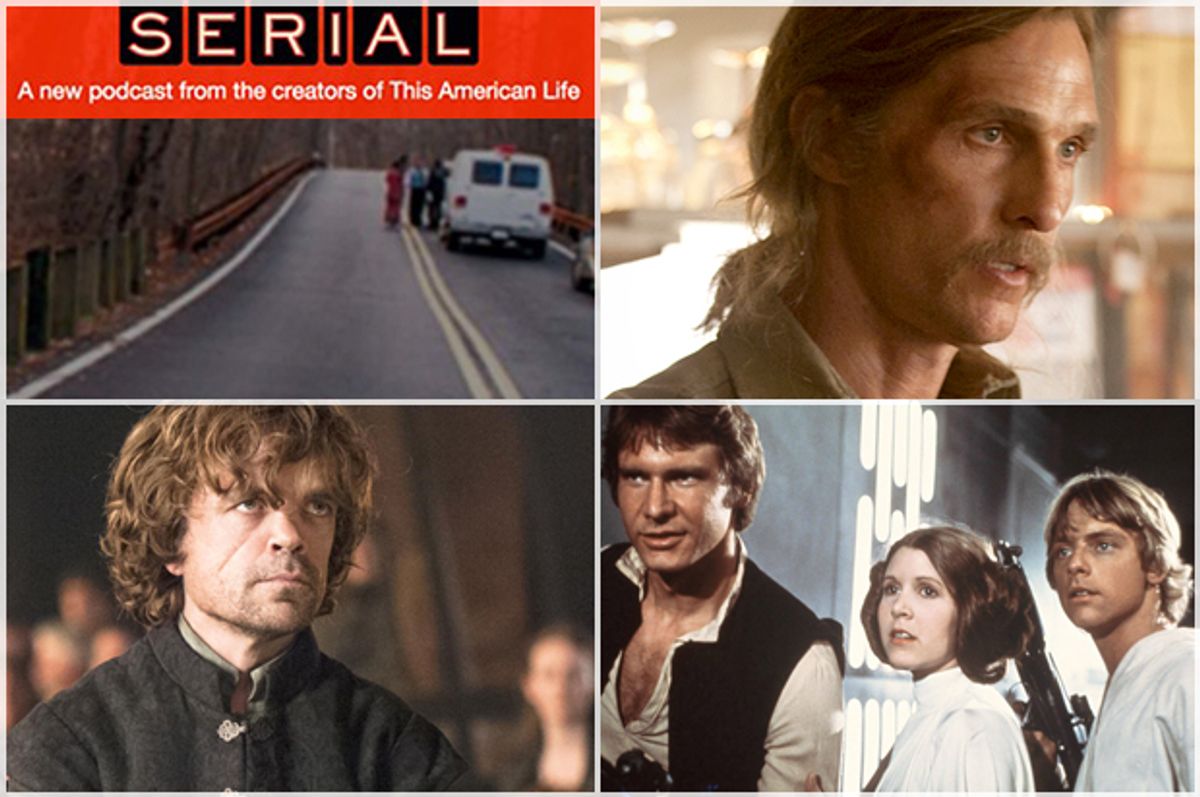 Two weeks ago, I was lounging at my parents’ house in Massachusetts over Thanksgiving break, absentmindedly breaking a paper-thin resolution not to stare into my phone all the time, when most of my Twitter feed briefly stopped making absurdist jokes involving the word “bae” and started doing something far more alienating. The new “Star Wars” trailer had dropped, and the entire Internet, predictably, couldn’t shut up about it.

I have never felt any affinity toward “Star Wars” -- my attitude about the franchise could best be described as “which one’s the wookie again?” So I gazed at the trailer-dissecting tweets with a healthy mix of condescension and indifference. But mixed in with the cold detachment, I must confess, lurked another, unignorable emotion: relief -- relief that I truly didn’t give a damn about this particular pop-culture phenomenon, and could safely skip it. A refreshing -- hell, even liberating -- sense of relief that I was permitted, per my lack of interest, to take a break from the ceaseless stream of media that a culturally literate person is expected to keep up with in 2014.

We live, as Willa Paskin argued at Slate recently, in an age of pop-culture obsession. “Adults used to obsess about things in a more steadfast manner, by having long-term interests known as hobbies,” she writes. But now, from "Serial" to "True Detective," sober-minded adults are “getting hysterically excited about very good but not hugely original cultural products seemingly every other month.” As Paskin notes, the “silo effect of social media” -- and the fact that people tend to cluster in homogenized groups -- amplifies the apparent universality of such obsessions. Even if only 5 million people listen to "Serial," compared to the tens of millions who watched, say, Seinfeld in the '90s, the former can feel like close to a default topic of conversation more than the latter ever did. (This spring, "Do you watch 'True Detective'?” was lobbed at me more frequently than “How was your weekend?”)

This can all become enervating, for a few reasons. For one thing, the world is a very big place, and the limited scope of pop-culture frenzy can make it feel deceptively tiny, as if there were only three things worth discussing on planet earth at any given time. It has become increasingly difficult, if you inhabit a certain milieu -- let’s just call it white-person Brooklyn, New York, for short -- to find people who are planted firmly outside the pop-culture-obsessive bubble, and want to talk to you off the bat about Brazilian politics, or the history of aviation, or anything but whether Adnan did it. (Why society has divided itself so cleanly into splintered, like-minded cliques is a subject for another day.)

In keeping with the default-ness of the pop-culture infatuations, there’s a certain roteness to the conversations around them. As “Breaking Bad” hysteria hit absurd heights last year, I fantasized about wearing a sandwich board to parties I attended, which would cut through perfunctory chats about the show by explaining in bullet-point form that 1) yes, I was currently watching it; 2) I really liked it -- you know, the cinematography is totally underrated; and 3) I thought Walter would probably die at the end. Maybe the board would list the five seasons of “The Wire” from best to worst for good measure, so we could get that inevitable exchange out of the way, too. (And yes, my fantasies are lame.)

Given the ubiquity of this kind of discourse, removing oneself from the equation altogether feels almost like a tiny -- OK, pathetically tiny -- act of rebellion, in the style of those tiresome people who used to talk about not owning a television. I admit, for instance, to deriving a perhaps shameful pleasure in revealing to an inquiring party that I don’t watch “Game of Thrones,” nor do I have any interest in doing so. While the "Star Wars" franchise doesn’t quite land in the Brooklyn-obsession matrix, I know that plenty of fanboys and girls in my purview will be tracking every frame of every piece of footage released. To genuinely not care about any of it -- to absent myself from each critical essay, each casting-decision debate and all the rest -- has become a strangely active choice. It’s a piddling nod to nonconformity, but it’s something.

Beyond the faux-iconoclasm, though, there’s the pressure of simply staying up to date in a culture that’s churning out “must-watches” faster than the human brain can handle them. As David Carr, writing about the oft-invoked new golden age of TV, put it in May: “The vast wasteland of television has been replaced by an excess of excellence that is fundamentally altering my media diet and threatening to consume my waking life in the process.” To complain about too much of a good thing feels unbearably perverse, yet, for me at least, the endless parade of quality entertainment can leave me feeling like a hapless grocery-store customer, paralyzed by a surfeit of choice. It’s nice to have access to 83 different kinds of salsa, but sometimes I think life would be easier if there were only three. And it’s that overwhelmed strain of thinking that can make even the most escapist fare take on the shape of an obligation instead of simple fun.