O'Reilly, Hannity and Scarborough are excited: Without "Colbert Report," their loud, lunatic voices have more power 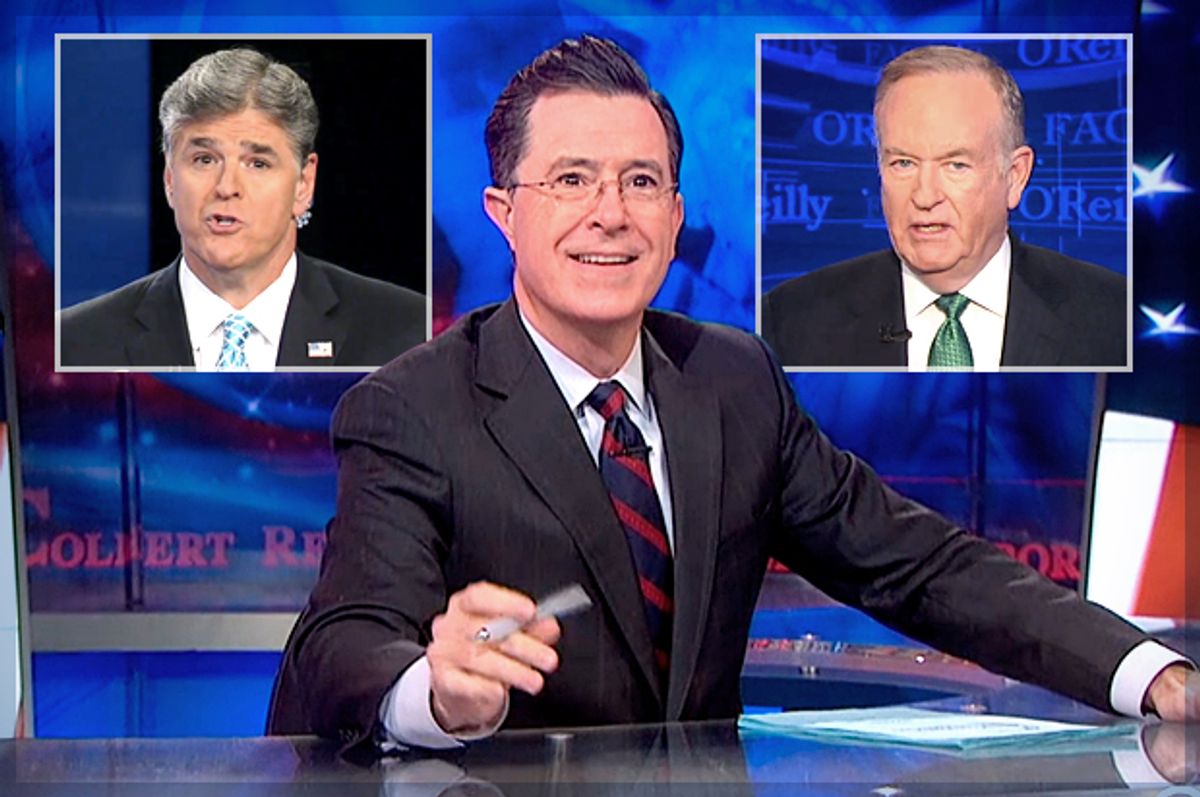 “The Colbert Report” officially ends Thursday and with it goes one of the most important satire personas in our nation’s history.  Following in the footsteps of Ben Franklin’s Poor Richard and Samuel Clemens’ Mark Twain, Colbert’s persona offered us an exaggerated version of one of our nation’s deepest social ills and, as with his counterparts, his focused on a main source for unsophisticated thinking.  Colbert’s target? Pundits.

Fashioned principally after Bill O’Reilly, Colbert’s character drew from other sources like Glenn Beck, Geraldo Rivera, Joe Scarborough, Lou Dobbs, Rush Limbaugh and Sean Hannity.  Night after night Colbert’s character reminded viewers of the evils of punditry and he did it in a way that was fun and entertaining.   So, as the character enters its final moments, the question we need to ask is what will become of punditry after “The Colbert Report”?

First we have to ask how our news media came to be so thoroughly dominated by pundits, since some of us can recall a time when that was not true. Pundits largely emerged on the scene in the 1980s when cable news channels went to 24/7 formats and needed commentary to fill airtime.  The shift was decisive for news media since soon viewers got more opinions about the news than news itself.  Not only that, but the opinions were increasingly hyperbolic, inflammatory and emotional.  Viewers watched “news” but instead of being given information from which to draw their own conclusions, they were fed hysteria and hubris.

With the highest ratings on the scene, Bill O’Reilly is the Papa Bear, not just of Colbert’s character, but also of punditry in general. According to François Debrix in “Tabloid Terror,” “Since 9/11, the conservative, populist, loud-mouthed Fox News network talk-show host and pundit Bill O’Reilly has taken it upon himself to represent and protect American lives.” The problem is that shows like “The O’Reilly Factor” report opinion and biased ideology as factual, true and objective. Moreover, they are organized around a constant sense of crisis and fear.  As Debrix explains: “The shock-value of O’Reilly’s interventions (or interpretations) is aimed at gathering popular support or triggering public scandal by unleashing waves after waves of fear among his audience members.” Thus by the time Colbert launched his own show in 2005 —almost 10 years after “The Factor” first aired -- the U.S. public had become accustomed to listening to pundits “feel the news at them” -- to quote Colbert from his premiere episode.

Every facet of Colbert’s character, then, was carefully created to illuminate the flaws and dangers to punditry.  For instance, in contrast to O’Reilly’s measured confidence, Colbert also enjoyed going after Beck’s constant crying.  In one bit Colbert compared himself to Beck by showing how both of them had been criticized for being “fake.” What follows is a series of images of Beck crying and Colbert parodying Beck. Colbert explains that it is refreshing to see how similar they are, “because if he and I don’t believe what we say, and don’t mean what we feel, then you, our viewers, aren’t just being intellectually impoverished, you’re being emotionally defrauded. And that would be a cynical manipulation of American’s legitimate fears. In which case, we shouldn’t be on TV at all. And I don’t know about Glenn Beck [Colbert starts crying], but that idea makes me very sad.”

Every time Colbert was compared to a pundit he reminded his audience that he was a parody of a pundit.  So logically it would make sense for him to be outrageous, say unjustifiable things, and flaunt his ego, whereas such actions on the part of leading news commentators should worry us.  Think, for instance, of Colbert’s fun-loving egocentric acts, including offering his own “man seed” for sale.  OK, so neither O’Reilly nor Beck nor Hannity is selling his man seed to us — at least not yet — but they do all market items that support their self-promotion. Isn’t that a bit creepy?  Can anyone imagine the late Mike Wallace from “60 Minutes” doing such a thing? And yet, Bill O’Reilly’s own home page is filled with items to buy: books, mugs, sweat shirts and more.  Beck wants to sell you gold and identity theft protection.  Hard to imagine better proof that he trades in fear.

It gets worse.  One of the stock in trade acts of pundits is to offer their audience insights into current issues by using faulty logic, false information or outright hype.  They often make claims that appear to the audience as fact, but have no basis in fact whatsoever.  Such was the case when Beck accused President Obama of having a “deep-seated hatred of whites,” only to then retract that claim saying he never said that “Obama didn’t like white people.”  When Colbert covered this backpedal move, he pointed out the flaws to Beck’s “logic”: “Deep-seated hatred and dislike are two different things. They’re as different as putting your foot in your mouth or your head up your ass.”

Colbert’s performance as a pundit also served another key function: He reminded us that today’s pundits are not expert commentators; they are performers who seek high ratings more vigorously than the truth.  Recall, for instance, that his set had an artificial fireplace with the engraving “Videri Quam Esse,” which means, “to seem to be rather than to be”; it's a reminder of Colbert’s simulated punditry.

But perhaps the best example of Colbert’s emphasis on pundits as performers came straight out of Papa Bear’s mouth when Colbert came on “The O’Reilly Factor.” O’Reilly stated: “It’s hard to be me. Is it hard to be you?” To which Colbert replied, “It’s hard to be me being you.” Then when O’Reilly appeared on Colbert’s show the comedian asked O’Reilly if he could take Hannity in a fight.  O’Reilly responded by saying Hannity would take him: “I’m effete. I’m not a tough guy. This is all an act.” Which led Colbert to respond: “If you’re an act, then what am I?”

This leads us to the final and most chilling feature of today’s punditry: the combination of hubris, partisanship, divisive tactics and social power.  One constant characteristic of the leading pundits is their assumption that they are simply right, about everything, always. They are supremely confident – in themselves and in their authority.  And they aren’t going to let any little facts get in the way of their certainty.  This was the message behind Colbert’s first “The Word” segment when he launched the neologism “truthiness.”

It was also present in one of his final episodes as he referenced the hype that Obama is a renegade president who issues decrees willy-nilly.  But, as Colbert explained, there was no need to worry since “the people with real power in this country are pundits like me and Papa Bear.” He then showed a clip of O’Reilly saying, “I have more power doing what I’m doing, OK, than getting involved with the political process. Plus, you have to kiss butt to get money. You know, $150 million to run for president. I can get things done like that. And that kind of power I could never have in elected office ever.” To which Colbert responded: “O’Reilly clearly has more power than the president. When’s the last time Obama sold self-lubricating catheters?”

The joke was funny, and it was even funnier to have Obama come out and take over Colbert’s job to show it’s easier to be a pundit than a president.  After the joke was over, though, it was time to worry. Soon we won’t have Colbert acting as a foil for the pundits, pointing out their flaws, and highlighting their excessive media power.  When Colbert’s character is gone, who will help us laugh at the pundits while keeping them in check?