"He wants to be God": "American Horror Story's" Finn Wittrock on playing a psychopath 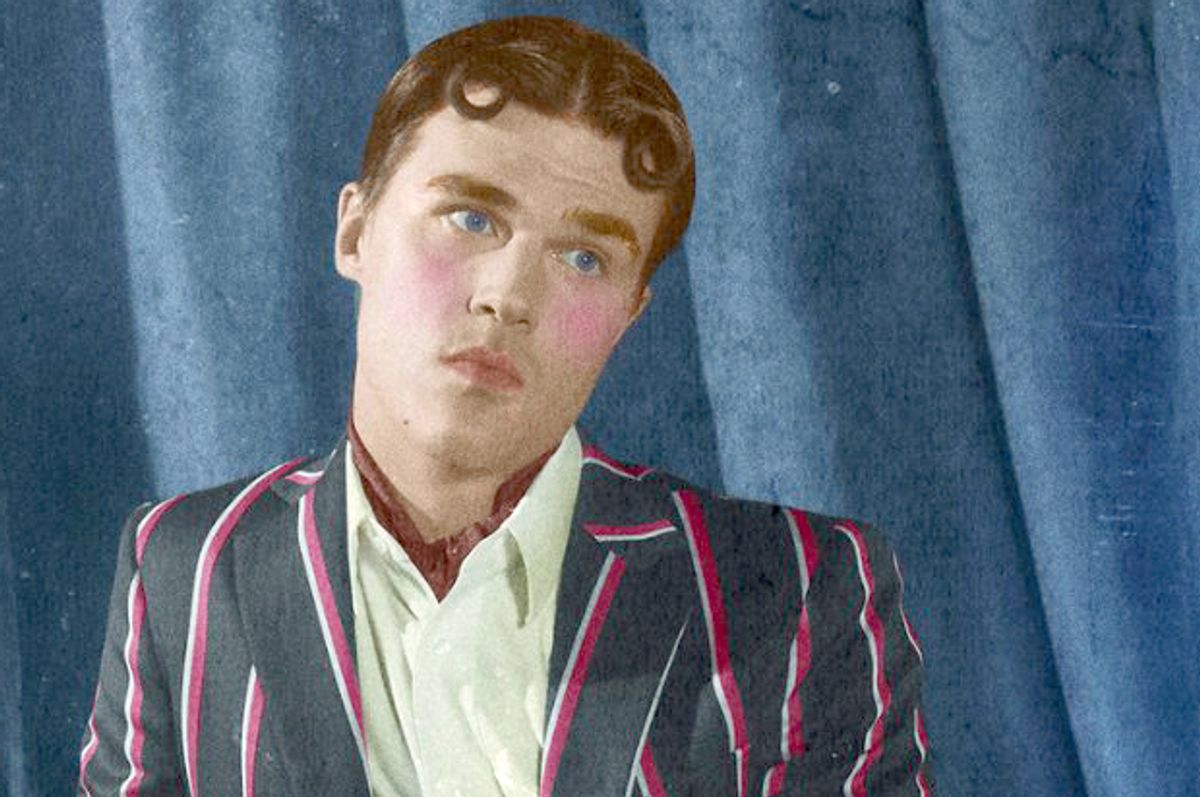 “American Horror Story” is prone to spectacle but never more than this season. Kathy Bates has a funny accent and a full beard, Jessica Lange has a wooden leg and sings trippy Lana del Rey covers, Sarah Paulson plays conjoined twins. Heck, Angela Bassett has three boobs and isn’t even in every episode.

But the breakout freak of “Freak Show” is snappy-dressing, baby-oil-slathering, mommy-murdering newcomer Finn Wittrock, who plays the psychopathic Dandy Mott. To recap, Dandy has killed the maid, the local hustler, his own mother, the Avon Lady, and an entire Tupperware party. And there are still four episodes to go this season, which is going over well with critics and with viewers.

Salon caught up this week with Wittrock to talk about his breakout role in “AHS” and his upcoming performance in Angelina Jolie’s much-anticipated “Unbroken.”

The Dandy Mott role first came up while you were filming “A Normal Heart” for HBO, right?

It did, but it wasn’t Dandy yet at that point. On set for “A Normal Heart,” Ryan [Murphy] asked if I would be interested in doing “American Horror Story” the next season.

What kind of character did he say Dandy would be?

He said Dandy was very rich and had some mother issues. [Laughs.] And then I got the first two episodes. Luckily, Ryan directed the first episode, so I was able to pick his brain about his ideas for Dandy. At that point, I was just going to do six episodes. The writers didn’t quite know the arc of the character yet. That’s how Ryan rolls. You don’t know what you’re getting yourself into, but you know it’s going to be cool.

In a series where you have different directors for each episode, how did you arrive at the right mix of creepiness, camp, childishness, etc.? Has that changed from episode to episode?

You trust your instinct. You get to know the character well enough to roll with whatever punches the writers give you. Eventually, it comes to the point where you know the character better than the director, and they’re more trying to guide the tone.

Did the character come mostly from you and Ryan working it out, or mostly you figuring it out from the script? I ask because this is a very distinct character with an odd set of traits.

It’s really a give and take. I get something in the script — like Dandy wanted to be an actor — and I roll with that and see how it informs my behavior. And then the writers look at the footage and say, “Oh, he did that thing. We should come back to that in the next episode.” So it’s a conversation without actually having an actual conversation. The writers are looking at what I’m doing, and I’m obviously looking at what they’re doing.

And then at some point, you start figuring it out. When I’m trying on costumes now, I can look in the mirror and say, “that’s Dandy,” or “that’s not Dandy.” Lou Eyrich is an amazing costume designer. She totally trusts actor’s instincts.

Dandy’s hair is pretty great, too. Had you ever done the slick, center-part look before?

Not something you’re going to keep?

No, that’s not my look for going out to the clubs!

The puppet show at the beginning of last week’s episode (“Tupperware Party Massacre”) is one of the most bizarre, grotesque things the show has ever done. Was your first reaction to seeing that in the script the technical, how-will-we-do-that reaction?

It was definitely “how are we going to do this?” And I also had the reaction of, “Wow, the writers really topped themselves.” If you look back, there have been other references to puppetry. One of the first things I do as the clown is have the puppets on the strings. He wants to be a puppet master. He wants to be God and control the people around him.

Loni Peristere, who directed that episode, is a visual effects guy. Did he supervise the two-headed puppet?

He’s very visual. He storyboarded most of the scenes, which a lot of directors don’t do. And he was very involved in the makeup and the overall look of things.

How did the producers do the puppets? Did they make face prints of the two actresses?

It was pretty cool. They got a face mold of the Avon Lady, and they built the head and built a rig onto Frances.

Oh, that was actually Frances Conroy in the scene?

Oh, yeah, she’s really up there. She went to Juilliard — we have the same alma mater — and is a very physical actress. She’s actually controlling the whole puppet thing. She had fun with that.

Do you think that sequence was mainly in the script for the visuals or was it to show that you had gone completely overboard on controlling things?

He’s always got a private and a public persona. The private persona is what you might label insane. It’s his control impulse taken to the furthest extreme.

I’m not even sure how you ask this. You got completely naked in that episode. Did the crew shoot around you being naked or did they just ask, “Hey is it OK if Gabourey Sidibe sees you naked?”

[Laughs.] I had to sign a waiver! I read it in the script, so I saw it coming. They give me some frontal, uh, protection.

Yes. “Cock sock” if you want the technical term.

Several episodes earlier (“Pink Cupcakes”) you had the scene where you covered yourself in baby oil and did a sort of manic exercise routine. What was the tone like on set that day?

It was fun and exciting. We have this amazing set in the playroom and each had some different ideas about what to do. The director [Michael Uppendahl] said, “Can you do push-ups where you clap your hands?” “Oh yeah, I can do that.”

You have shot scenes all over that playroom this season.

It’s a really incredible set. The writers saw that room, I think they put a lot more scenes in that room just to use it.

The first eight episodes were mostly an A story about the circus and a B story about Dandy. Did you know what was going on in the circus story line while you were shooting your scenes?

I have been able to read full scripts, which I think is really important. There were some seasons where people only saw their own parts, but I need to know what the episode is doing and where I fit into that.

Were you interested to see how the stories would converge, or did you not really think about it?

Yeah, Dandy keeps inching closer to the freak show, and you can sense it coming. We’re shooting the 13th [and final] episode now, and I think I can say the worlds collide without spoiling too much.

Dandy’s mother suggested to him that he is murderous because he’s inbred. Did it really matter to you episode by episode why he’s a psycho killer, or do you just play what you’re given?

You can’t play, like, “inbreeding,” but I can think about what his childhood was like, and I did a lot of that — how he grew up and how isolated he was from the world. In terms of why he has the pathological, sadistic urge within him, it’s like “why do you fall in love?” It’s just an innate part of him.

Have you finished shooting your scenes for the season?

We’re heading into our last week. I’m actually in LA now for the premiere of “Unbroken,” then I go back [to New Orleans] to finish up.

Have you talked to the producers about next season?

I honestly know nothing about it.

You co-wrote and are starring in an indie film called “Submarine Kid.” Have you shot that already?

Yep, we shot in April. Actually, tomorrow I’m going to finish some audio. We’re submitting it to festivals.

That’s the hope, yeah. These indie movies, it’s a constant battle. You work so, so hard to get the money, shoot it, edit it, and then your work is just beginning. You have to get it out there.

What's next? Are you doing a TV pilot in the spring?

Pilots aren’t really on my radar. I’m trying to focus on film. I love television, but I want to make a real stab at movies.

Who do you play in “Unbroken”?

I play Francis McNamara, who is one of the three survivors of the B-24 plane that crashes in the Pacific. Two guys survived and Mac didn’t make it, so I’m only in the first half of the movie.

Was Angelina Jolie’s approach as a director to explain the movie upfront, or did she tell you what you needed to know when it was time to shoot?

She’s very collaborative. She knew Louie Zamperini, and she had a very personal connection to the film. She did a lot of research and was very meticulous about getting the details correct. The acting work was very much like a conversation between us. We would have one-on-one meetings before we started, and she was very open to our input and creative impulses.

Did she shoot a lot of takes, or did she move pretty quickly?

She was pretty economical. If she knew we had it, we would move on. We had the amazing Roger Deakins as our cinematographer, so there would be a lot of prep for every shot. Then it’s a couple of takes and you move on.

What are you shooting next?

I actually don’t know what’s next. I’m in the unemployment line. [Laughs.]