"Mr. Turner": This gorgeous story of a wounded misanthrope genius will surprise you 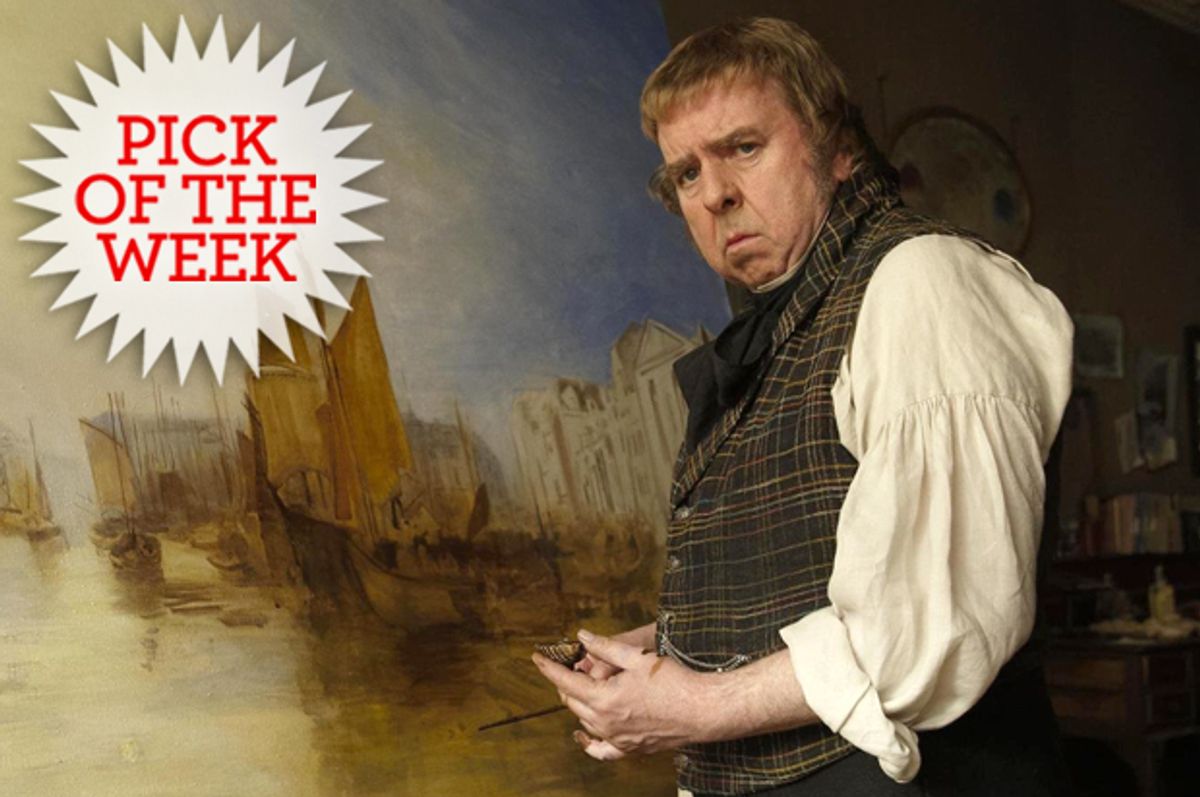 Throughout the history of film, movies about artists have provided a venue for filmmakers to engage in covert autobiography, and also to reflect on the unique status of cinema, which inherited and blended two of the 19th century’s dominant art forms, painting and theater. All of that is true in Mike Leigh’s subtle, tragicomic “Mr. Turner,” which among other things possesses a pictorial intensity and a sense of widescreen spectacle not heretofore seen in Leigh’s talky and claustrophobic films. Dick Pope, Leigh’s longtime cinematographer, makes the most eloquent argument for the virtues of the Arri Alexa digital camera that I have yet seen, creating a series of startling tableaux that capture the smoky, watery visual world of Joseph Mallord William Turner (played here by the amazing Timothy Spall), the irascible, scoundrelly British genius and artistic revolutionary.

But “Mr. Turner” is still a film by the cinematic iconoclast of “Happy-Go-Lucky,” “Secrets & Lies” and “Life Is Sweet,” meaning that it’s thick with witty, improvised dialogue and focused on the rhythms and events of everyday life rather than on a conventional story of crisis and redemption. Viewers expecting a Harvey Weinstein-style period drama, or who go in consciously or unconsciously yearning for a three-act structure, are likely to find themselves bored and frustrated. As the film itself demonstrates, this “critics vs. audiences” dilemma is a central feature of modern culture. “Mr. Turner” is a rich, ruthless and profoundly compassionate study of life and love and art, for those who find themselves on its wavelength, but it also presents itself as a challenge. The Victorian public that mocked and rejected Turner’s later canvases, with their nearly abstract smears of color and their prescient turn away from ordinary notions of “representation,” is the same public (Leigh suggests) that prefers middlebrow inspirational biopics to ambiguous portrayals of real life and real death.

Like the movie itself, Spall’s portrayal of Turner is initially puzzling and a bit off-putting. He’s a lumbering, grumbling buffalo with a head like a misshapen root vegetable, a working-class London boy, with dense accent to match, dressed up in Victorian-gentleman drag. All this draws on Leigh and Spall’s intensive biographical and historical research: If Turner was every bit the unconventional and “eccentric” artist – a man who never married, had children out of wedlock and lived pseudonymously with a widow who may not have understood that he was famous – it was in a distinctively English vein. For all his continental travels and his intense study of European art, Turner remained a barber’s son from Covent Garden, whose closest and most enduring relationship was with his beloved “Daddy” (played by Paul Jesson, a terrific British TV actor).

Spall only gradually peels the onion of Turner’s personality, as if begrudgingly, and it won’t be lost on anyone who has ever met Mike Leigh (or even read an interview with him) that the combination of ingredients is familiar. He’s a crotchety, difficult and seemingly unfriendly person who has difficulty communicating with others and compares himself, not without reason, to a gargoyle. Yet he also feels and sees things others do not; Turner understood the nature of light in a way that looked backward to the Dutch Masters and forward to the Impressionists: He grasped that light was a physical phenomenon, long before the discovery of the photon, even as he also considered it in spiritual terms. The crucial art-history insight that a painting is not a representation of reality but a rectangle of canvas with pigment on it was something Turner grasped early and pursued to the end.

We see Spall’s Turner behave callously toward his own biological children (whom he largely ignored), and behave with great tenderness toward Sophia Booth (Marion Bailey), the widow from the seacoast town of Margate with whom he spent his final years. Leigh makes no effort to resolve this apparent contradiction, except in the sense that as we watch Turner navigate the class-divided and intensely coded world of Victorian society, from palaces to brothels and everything in between, he becomes more understandable as a deeply wounded but essentially ordinary person with extraordinary gifts, no less likely to behave nobly or abominably than anyone else.

Even if you think you’re strong on 19th-century cultural history, “Mr. Turner” will keep you on your toes; I feel as if I need to hit the books and then come back for a second viewing. Queen Victoria and Prince Albert move through one scene so quickly you might miss them (they were not fans of Turner’s murky, mysterious later canvases). Eminent critic John Ruskin (Joshua McGuire), a major Turner-booster, gets a hilarious turn, but John Constable (James Fleet), the second-greatest British landscape painter of Turner’s era, is barely glimpsed. The Royal Academy group shows that made some artists famous and reduced others to penury are depicted as an avaricious free-for-all, with paintings of all sorts jammed together cheek-by-jowl on the walls, the floor and even the ceiling.

You wouldn’t peg Mike Leigh as someone with tremendous interest in the natural world, or much of an appetite for the “sublime,” an important concept in the Romantic era in general and Turner’s paintings in particular. But if Turner saw that the thin, uncertain and often gloomy light of Britain and northern Europe had as much magic in it as the sun-swept climes of the Mediterranean, Leigh’s films about the everyday lives of ordinary British people have been built on a similar insight. This is a richly detailed, wrenching and often upsetting story about a man who may not have been especially satisfying to others as a human being, but who spent every day reaching for the ineffable and ungraspable meanings behind observable events – or at least trying to see them, which may come to the same thing.

After his own fashion, Turner had a streak of documentary or journalistic sensibility: He painted drowning victims, real-life shipwrecks, a fire that destroyed the Houses of Parliament. Even when the public rejected works like Turner’s 1844 railroad landscape “Rain, Steam and Speed” (now considered a masterpiece) as ugly, grotesque and pointless, he continued to believe that his talent came with a responsibility to those who would live after him. As Leigh reminds his British viewers, Turner turned down the chance of immense wealth in order to leave most of his work to the British public, on the condition that it all be exhibited together. Revered as Turner is today, that didn’t happen. Whether this lovely, emotionally complex and deeply strange film is meant to suggest that we’ll appreciate Mike Leigh more in days to come, or to remind us that the calculus of joy and pain we inflict in our time here is impossible to compute, I am not sure. Both are true.