Sony's theater of the absurd: How "The Interview" became the most insane cultural-political spectacle in recent history

A major Hollywood movie is dead because of North Korean cyberattacks, and the whole thing is too bizarre to believe 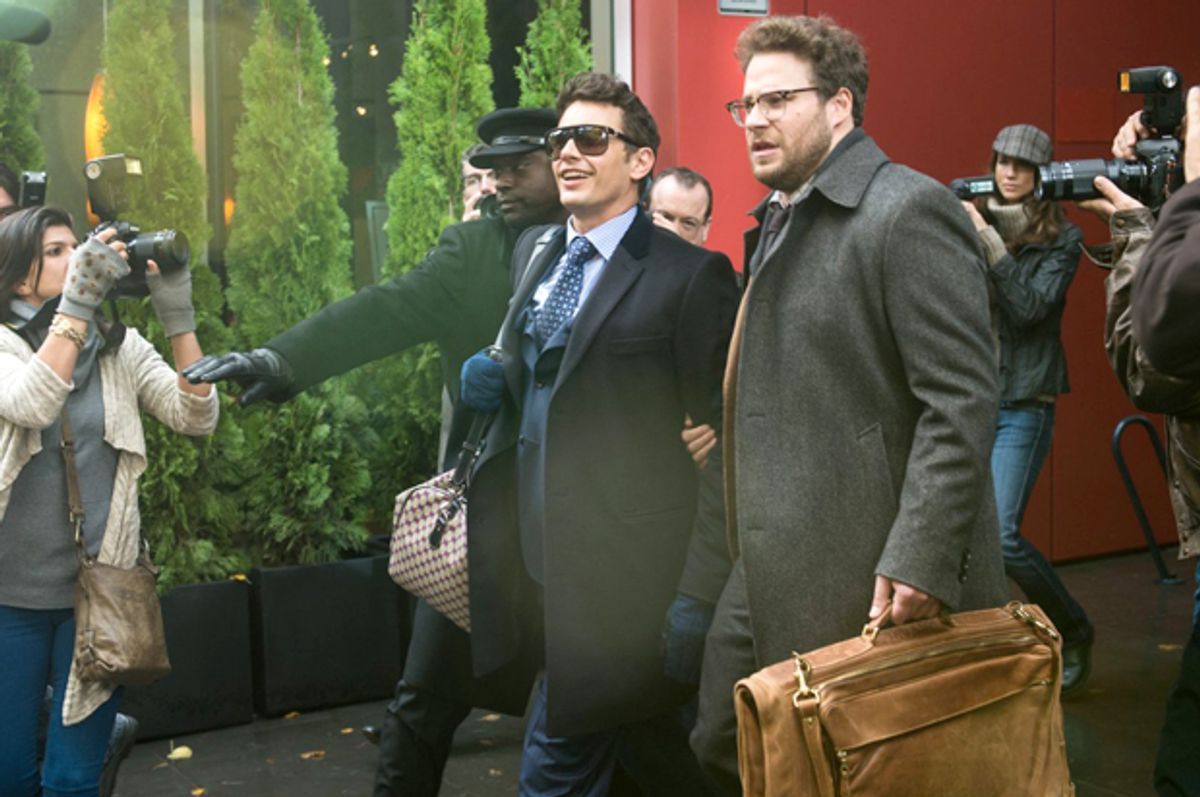 Let me see if I have this right, because the whole thing stretches credulity: North Korean dictator Kim Jong-un has apparently managed to kill a major Hollywood movie. I mean, a stupid one, by all accounts, but still. We had a choice – “we” being a term of art that does not actually include you and me – of whether to stand tall for the supposed principles of free expression and free enterprise or “let the terrorists win.” We let them win, with barely a moment’s hesitation. Now an upcoming Steve Carell thriller set in North Korea has been canceled, too. It’s a breathtaking and total victory by a despised, isolated and impoverished nation (or by those acting on its behalf), over one of the biggest media corporations in the world.

Let’s back up for a longer view, because there’s a lot about this wildly improbable news event that we still don’t know and doesn’t make much sense. So Kim Jong-un’s terrible and ridiculous North Korean regime, which he inherited from his dad and his granddad and is the last pure example of old-school perverted Marxism-Leninism mixed with insane cult of personality anywhere in the world, is now believed to have masterminded the hacker attack that has brought Sony Pictures to its corporate knees and revealed all sorts of embarrassing information about its overpaid executives and pampered movie stars. And it all happened because of the James Franco-Seth Rogen farce “The Interview,” which was made and bankrolled by Sony, and is about an attempt to assassinate Kim, using his actual name. (Something even Charlie Chaplin did not do in “The Great Dictator,” although there wasn’t much mystery about who “Adenoid Hynkel” was supposed to be.)

That’s already a bewildering world-encircling worm of an event, an implausible but hilarious plot element in a novel by Don DeLillo or Thomas Pynchon. Or even an element out of “The Interview,” if it were any good, which I hear it isn’t. I haven’t seen the film because I missed the first New York press screening and was supposed to go to another one this week, which now will not happen. Now Kim's people – according to U.S. government sources quoted in the New York Times report, at least – have sent an incompetent terrorist threat that appears to have been Google-translated by someone with zero fluency in English and makes Osama bin Laden look like a master of rhetoric. “We will clearly show it to you at the very time and places ‘The Interview’ be shown, including the premiere, how bitter fate those who seek fun in terror should be doomed to.” Hello? Monsieur Godard? You’re breaking up, I couldn’t follow that. Also, much as I might be tempted to agree with you about those who seek fun in terror, you’re really not supposed to end a sentence with a preposition. Lots of people have a stick about that, their butts up.

But this near-incomprehensible threat also referenced 9/11 or, more poetically, “the 11th of September 2001,” which is the magical Voldemort incantation that makes corporate CEOs and American politicians, despite their thick coating of lard and money, poop themselves and crawl under the furniture whimpering like little bitch-babies, to quote Kerry Washington on “Scandal.” Just to be clear, there has never been a North Korean-sponsored terrorist attack in the United States (or anywhere else in the West), and the odds that any individual multiplex in the exurbs of Cincinnati or San Antonio or Honolulu is going to be blown up by a coven of Pyongyang hackers make getting eaten by sharks and struck by lightning on the day you hit the lottery seem probable. But it’s only the incantation that matters. THEY SAID 9/11 OH HOLY F@CK WERE ALL GONNA DIE.

After the utterance of that incantation on Tuesday, Sony told theater proprietors they could back out of their contracts to begin showing “The Interview” on Christmas Day, if they chose. Then the National Association of Theater Owners (amusingly known as NATO) told its members it was OK to “delay” screening the Franco-Rogen farce “so that our guests may enjoy a safe holiday season experiencing the many other exciting films we have to offer.” Here we see the basis for the holiday-week marketing campaigns for “American Sniper,” “Into the Woods” and “Dirty Grandpa”: Not associated with any known terrorist threat!

By Wednesday morning it was evident that “The Interview” release was in jeopardy. Carmike, a major theater chain in the South and Midwest, was the first to announce it wouldn’t show the movie at all, and two smaller chains, Bow Tie (New York and Virginia) and ArcLight (Southern California), rapidly followed suit. But sitting here amid the cushioned cynicism of the New York media sphere, I still really didn’t believe it. Was a worldwide media giant really going to capitulate and throw in the towel on a major Christmas movie expected to make hundreds of millions of dollars? Before a vague threat of violence that has not been deemed credible, even by the customarily hysterical fear-mongers of the intelligence agencies and the FBI?

I guess the answer was foreordained, but like so much that happens in America these days, it’s an answer that reveals our tremendous weakness and spectacular cowardice, our hilarious and pathetic tendency to resemble the proverbial elephant cringing before a mouse. After all the other major theater chains jumped on the bandwagon of fear – including AMC, Cinemark and Regal, which together control a majority of the nation’s screens – Sony yielded to the inevitable and canceled the release of “The Interview” altogether. You could argue that all of this is excessive but understandable caution, and that no theater owner or movie studio wants to run the 0.01 percent risk that its reputation will be destroyed by a murderous attack. But that isn’t the answer, because I don’t think any real people think the risks are even that high. Sony and the theater owners don’t want to run the 100 percent risk that they will be pilloried by Fox News talking heads and deranged Internet commentators for not keeping Americans safe, and for inviting Ebola-carrying Mexican-Muslim-Communist terror-drones to attack the very shopping malls that represent the zenith of American freedom and the American way of life.

My heart does not bleed for Seth Rogen or James Franco, who got paid millions to make a film that arguably does cross an invisible line of decency by invoking the death of a living fellow human, however execrable he may be, and who do not have to give any of that money back now that the movie is a punch line to one of the most bizarre cultural-political episodes of recent history. (I momentarily entertained the theory that this whole thing marked the culmination of the extended performance-art project that is Franco’s entire celebrity career.) One could even argue that there’s an element of karmic payback at work here for all the greed and carelessness and calculated idiocy of Hollywood – as they have sown, so also shall they reap, or whatever. Except what, exactly, have they reaped? I guess the titans of America’s culture industry, which is about the only area of manufacturing where we still rule the world, have been revealed as stupid and calculating and driven by fear, as chickenshits who can’t even successfully pretend to believe in the value of their own products. We should have known that already, but maybe the reminder is useful.