The 10 best moments in political comedy this year

Stewart and Colbert were up to their usual tricks, but Louie C.K. and Dave Chappelle each left their stamp on 2014 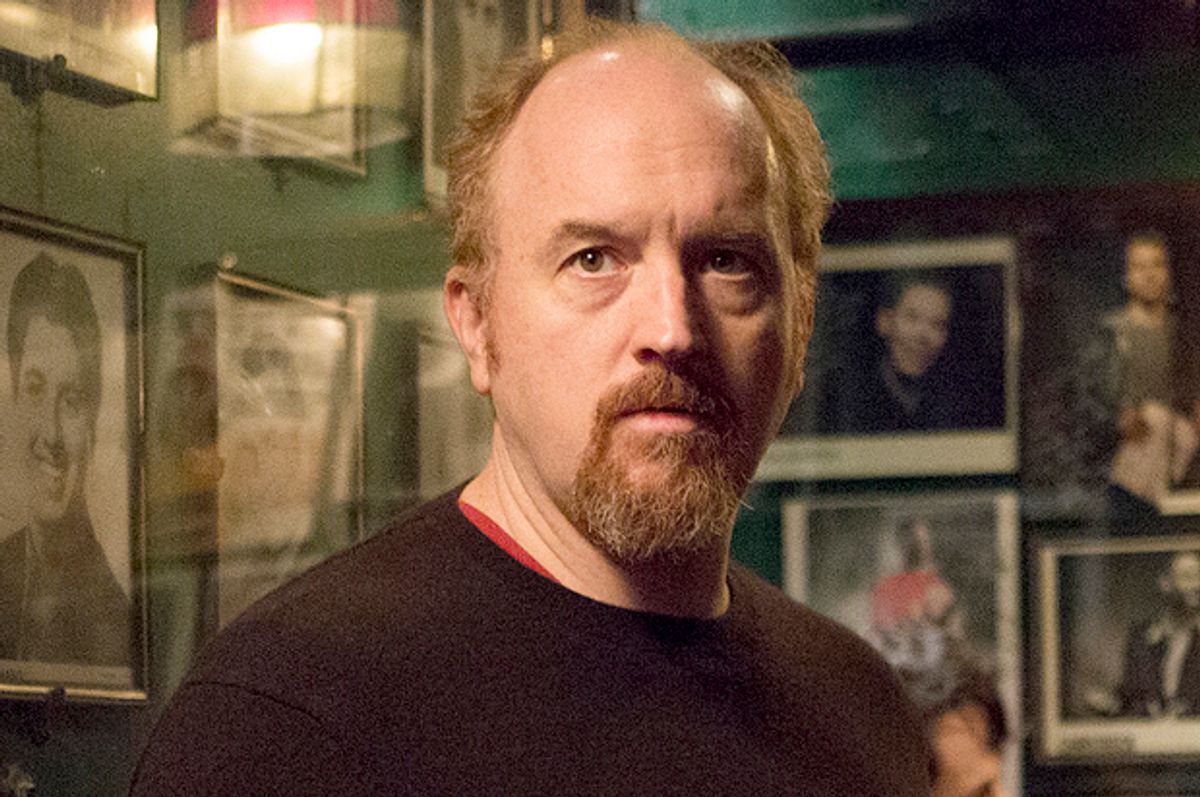 This was a rough year for comedy. As Chris Rock put it, “We lost Robin, we lost Joan, and we kind of lost Cosby.” But, we gained some, too. Breakout stars like Hari Kondabolu and John Oliver made keen, quotable observations that resonated with ever-widening audiences. Young Americans cited comedy news shows as increasingly more relevant than “traditional” news sources. And in a year when there was so much tumult, unrest and tragedy, nearly all comedy seemed political – quite possibly because we were all in such desperate need of a laugh. Not every notable high (or low) point necessarily came from those easily identified as political comedians. Sure, Stewart and Oliver take up expected slots on this list -- but they sit alongside some less expected candidates. In times of political crisis, comedy is often where the most revealing, telling and above all, honestinsights are made. In 2014, these were 10 of the best political comedy examples of all three. (Eds. Note: Don’t worry that your favorites haven’t made this list. This is part one of a two-part series.)

Hari Kondabolu was one of, if not the, undisputed star of political comedy this year. A former immigrant-rights organizer, writer for the funny-but-canceled “Totally Biased with W. Kamau Bell,” and one of the most thoughtful -- and truth-telling -- voices on Twitter, Kondabolu has long been a provocative and perceptive voice on race. This year, with the release of his stand-up album “Waiting for 2042” -- a reference to the year that white people will become a minority in the United States -- Kondabolu’s audience and influence grew vastly with critics, comedy fans and activists alike. “Saying I’m obsessed with racism in America is like saying I’m obsessed with swimming when I’m drowning,” Kondabolu says in the clip below, a sentence that has recently found a home on signs carried in protests around the country.

2) Jon Stewart: “You Really Do Have No Fucking Idea, Do You?”

FOX News handled the killing of unarmed teenager Michael Brown, and subsequent protests in and around Ferguson, Missouri, the same way it handles every story involving race -- which is to say, by accusing anyone who mentioned racism of playing “the race card.” By the time “The Daily Show” returned from summer hiatus, weeks into the story, Jon Stewart had a long list of insane quotes from the channel’s pundits to marvel at. This included Sean Hannity’s idiotic suggestion that the only thing differentiating police treatment of him and Michael Brown is that when he’s stopped by an officer, he’s smart enough to “lift [his] shirt up” so the police can see he’s packing heat. Stewart, exasperated, began his response by asking, “You really have no fucking idea, do you?”

A second notable moment this year came as Stewart addressed a Staten Island grand jury’s decision not to indict the white officer who killed Eric Garner, a verdict that came just days after a similar outcome in Ferguson. "I honestly don't know what to say,” Stewart stated, somberly. “If comedy is tragedy plus time, I need more fucking time. I would settle for less tragedy than comedy, honestly." He then went on to note that “none of the ambiguities that existed in the Ferguson case” existed in Garner’s case, thanks to video seen by millions. "Yet the outcome is exactly the same."

3) Doug Benson on “Getting Doug with High”:

Comedian Doug Benson loves getting high. So much so that he did a 2004 off-Broadway show called the “Marijuana-Logues,” a 2007 documentary called “Super High Me” (imagine “Super Size Me,” only with pot), has described smoking a joint with Brad Pitt in High Times, and hosts a video podcast called “Getting Doug with High.” On every single episode, Benson sits down with his guest at 4:15 p.m., ensuring that everyone’s ready to blaze at exactly 4:20 p.m. (not necessarily in his own time zone, but it’s always 4:20 p.m. somewhere). Most of the talk that follows is pot-oriented, punctuated by additional smoking. Guests this year have included David Cross (below), Jack Black, Sarah Silverman, Margaret Cho and, in the ultimate get, Cheech and Chong. Check out more episodes on Benson’s Youtube channel, here.

When “This Week Tonight” premiered earlier this year -- HBO’s foray into the satirical news business with “The Daily Show” alum John Oliver at the helm -- it seemed like an all-too-familiar set up. Instead, the show has been anything but predictable, taking the well-tread comedy-news format and adding an extra layer of analysis and insight to the experience. With a week’s hindsight, the program can delve deeper than its daily satirical news competitors, conducting real investigative reporting interwoven within Oliver’s signature 10-15 minute rants. The virality of nearly every episode has been a testament to how much the show has gotten audiences talking. But perhaps the most astonishing segment this year focused on civil forfeiture, a little-known -- but often abused -- procedure which allows police to seize money and property from citizens without proof of a crime having been committed. Oliver and his crack team of writers, along with the cast of “Law & Order,” do a masterful and hilarious job of explaining just how frighteningly ridiculous the process is and pointing out why the system is in desperate need of an overhaul.

For years now, Hannibal Buress has been one of the funniest up-and-coming comedians working, as fans of his stand up, “The Eric Andre Show” and “Broad City” already know. Chris Rock even once likened him to a cross between “Steven Wright, Mos Def and Dave Chappelle,” the highest of praise, indeed. And yet, the joke that made Buress one of this year’s most talked about comedians wasn’t one of his standard wry observations (for that, check out “Hannibal Buress: Live From Chicago,” released this year). During a stand up performance in Philadelphia on October 16, Buress launched into a bit about Cosby -- one he’d performed dozens of times before -- in which he called out of America’s paterfamilias on his respectability politics in the face of years of unaddressed rape allegations. “He gets on TV: ‘Pull your pants up black people, I was on TV in the 80s! I can talk down to you because I had a successful sitcom!’” Buress joked. “Yeah, but you rape women, Bill Cosby, so turn the crazy down a couple notches.”

As we all know, the clip went viral, and Cosby’s rape allegations going back decades were thrust into the spotlight, with dozens of survivors coming forward. “I want to just at least make it weird for you to watch ‘Cosby Show’ reruns,” Buress said at the time.

Kristen Schaal is everywhere, if you’re looking: from reruns of “Flight of the Conchords” (R.I.P.) and “30 Rock” (R.I.P.), to “The Hotwives of Orlando,” and the recurring voice of Louise on the fantastic “Bob’s Burgers.” (Not to mention appearing in one of the most referenced alt comedy bits of ever.) Somehow, she also finds time to serve as the “Senior Women’s Issues Correspondent” on “The Daily Show,” a role which this year found her pointing out the absurdity of Republican efforts to reach women by equating voting with dating. (“Republicans have finally figured out what’s most important to women: Menfolk!”) The sheer ridiculousness of the ads has to be seen to be believed, but Schaal’s satirical playing along is what makes the sketch really worth watching.

7) Louis CK Takes Himself and All of Us to Task for Fat Shaming:

In the scheme of things, this was one of Louis C.K.’s least political years. In 2014, the comedian who famously used his onstage time to unpack white privilege and remind (white) people of how recently slavery was, took part of the year off from being pretty much everywhere, all the time. But there were moments. For example, back in March,CK hosted SNL, and used his eight-minute monologue the way an experienced stand-up would: dismissing First World problems, discussing whether or not there’s a God, and marveling at our comfort with misogynist names for clothing. On his own show, “Louie,” the comedian took men -- and by extension, all of us, really -- to task for fat-shaming, and essentially rendering invisible, women who are overweight.

It would be slightly disingenuous to call this Dave Chappelle’s “comeback” year -- after all, he’s made intermittent appearances on television and stand-up stages throughout the decade since his wildly popular Comedy Central show abruptly ended. But 2014 was the first year the comedian embarked on a country-crossing tour in a very long time, almost all of the feedback from which has been fairly glowing. (There are still dates in parts of the south, if you’re interested.) As the list of rules for Chappelle’s appearances have generally included no recordings, there’s little footage to share. But one audience member did manage to document Chappelle’s hilarious take on the Donald Sterling controversy, about which Chappelle says, “Via a secretly recorded, private conversation, it was revealed that here, in the United States, a white man over [the age of] 80 has racist tendencies. Absolutely stunning!” The full clip, so surreptitiously shot it never once features Chappelle’s actual visage, is below. More recently, while discussing the death of Eric Garner, the comedian described his own experience of being choked by the police.

A list of all the reasons “Key & Peele” has risen from cult favorite to bonafide critical and audience darling would be impossibly long, but a few standout reasons come to mind. The duo’s ability to find humor in even the most unexpected aspects of day-to-day life, from the tragic to the mundane; their uncanny ability to completely morph into an endless and diverse stream of characters; and the writing, which is nearly always tight, smart, keenly satirical and boundlessly creative. While K&P’s most overtly political sketch is the recurring Obama Anger Translator (in which a character named Luther articulates what the President really means despite his unflappable exterior), this season featured plenty more memorable skits. In “Alien Imposters,” racism turns out to be the best way to tell real humans from earthly invaders. “Dicknanigans” makes fun of political performance art with a swift, and literal, kick to the groin. While “Gay Wedding Advice” is a genius take on straight people’s most ridiculous presumptions about gay marriage.

Cultural critic, writer, blogger, performance artist and comedian Kristina Wong has made a career out of revealing just how lazy and offensive racist and sexist stereotypes are, particularly those relating to Asian women. From the “model minority” myth to the submissive Asian bride, Wong’s writings and videos take apart the absurd assumptions that lie at the heart of popular and reductive ideas about the estimated 19,000,000 Americans of Asian descent. In “Asian Vaginas End Racism,” Wong -- dressed at last one-third of the time as an “Asian vagina” -- points out the ludicrousness of the idea that dating or having sex with an Asian woman makes white guys de facto anti-racists. It’s also worth watching Wong’s episode of the reality program “I’m Asian American And…” in which she creatively, and sometimes obnoxiously, demands her own form of reparations from yellow fever-suffering online dates.