Why New York's fracking ban is a victory for communities everywhere

From here on out, one fractivist tells Salon, "it'll be hard to get people to believe there's nothing they can do" 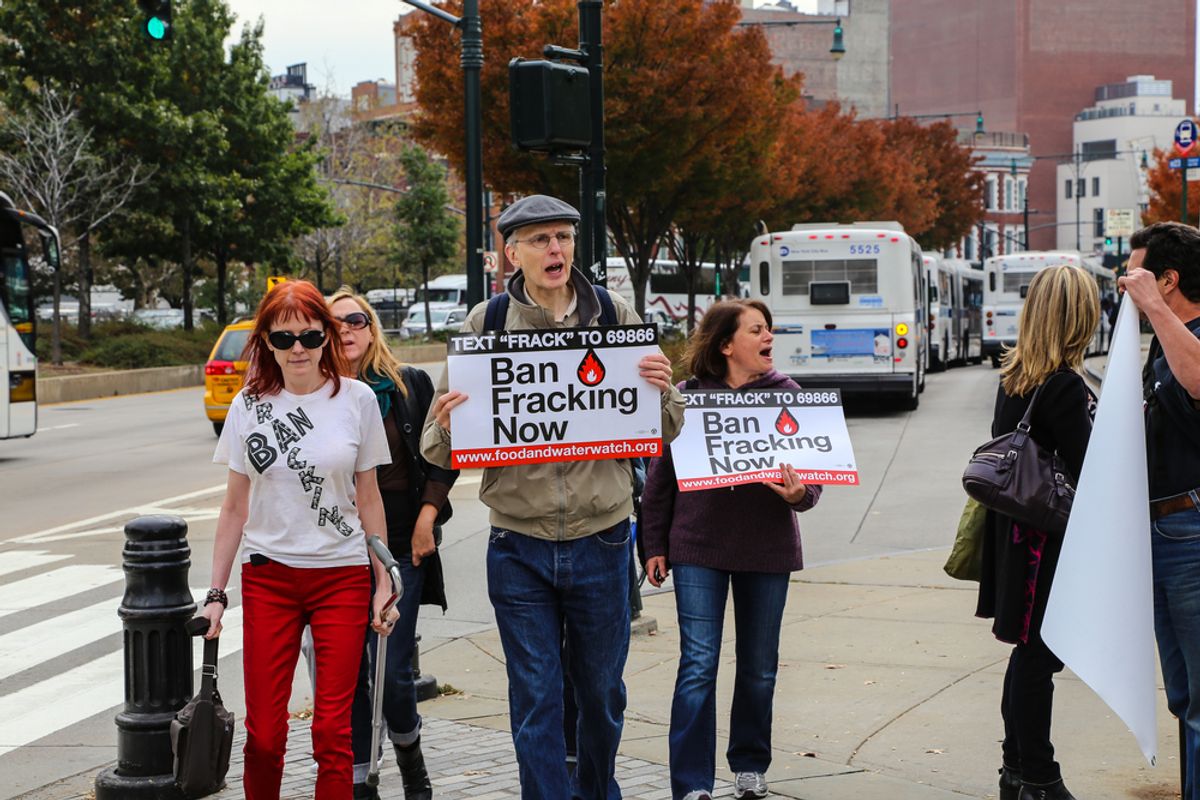 Fracking took a beating yesterday, when New York Gov. Andrew Cuomo, on the heels of a stern recommendation from the state's acting health commissioner, announced his intention to ban the unconventional drilling method.

But even if he'd failed to do so, frackers would've been effectively barred from a large number of the state's communities, anyway. That's because, during the excruciatingly long years that the state spent weighing the issue, a team of lawyers quietly helped individual towns use zoning ordinances to keep the industry out, regardless of what state and federal law says. When Salon spoke with one of those lawyers, Helen Slottje, in April, she and her husband, David, had successfully passed such laws in 172 towns. In June, the state's highest court affirmed their right to do so.

Now that New York state has said it won't allow fracking within its borders, their fight's become redundant -- at least so far as fracking goes. Speaking with Salon Wednesday night, Slottje was thrilled about the decision, but said that she's by no means ready to stop fighting. There are still a lot of other infrastructure projects to take on, after all: pipelines and gas storage facilities, for example, that are "equally if not more devastating" to communities. And they're already going national: "There are communities across the country that are looking to emulate New York's model of home rule and local control over gas drilling decisions," Slottje said, with an enthusiasm that has been building since the June Court of Appeals decision.

"I think with New York affirmatively taking a stand against fracking, that's going to empower and generate even more interest across the country," Slottje told Salon. "Even in states where the state won't be as bold as what New York has done here, communities will feel that they're not out on a limb, that this isn't a radical decision."

In reaching his decision, Cuomo was adamant in saying that he deferred to the experts, who identified serious potential public health risks from fracking. The absurdly low current price of gas and oil probably didn't hurt, either. But it hasn't escaped anyone's notice how vocal and aggressive New York's fracking opposition has been. For years, the governor was "hounded by protesters" everywhere he went; it's often cited as a reason why Zephyr Teachout,his anti-fracking opponent, was able to win a third of the vote in the primaries. Cuomo himself called protesters "literally the most prevalent protest group in the state by far." Wednesday, his very understated way of putting it was to say, “I get very few people who say to me, ‘I love the idea of fracking.’”

Bill Lipton, director of the New York state Working Families Party, which was among the founding groups of the New Yorkers Against Fracking Coalition, summed up that sentiment in a statement to the press following Cuomo's announcement: "Six years ago, the gas drillers told us hydrofracking was an inevitability," he said. "Every New Yorker who spoke up, called their lawmakers, boarded a bus to Albany, signed a petition or put a sign in their yard deserves enormous credit."

"New York is a bellwether state for fracking nationally," Wenonah Hauter, the executive director for Food & Water Watch, wrote in a blog post, "and is the first shale state to take such bold action against fracking." The decision, she asserted, "will have a ripple effect across the country and act to strengthen efforts against fracking nationwide."

Slottje agrees, and thinks that the implications go beyond just fracking. Next on her list: Denton, Texas, which has already been sued over its fracking ban; Richmond, California, where voters rejected the corporate influence of Chevron, which has a major oil refinery there; Oklahoma; Montana; West Virginia; Virginia; Maryland -- places across the country where efforts are building to oppose projects that, as she puts it, "really are borne on the backs and at the expense of local communities."

New York's fracking ban, Slottje said, is really a victory for the people. And it should weaken the energy lobby's power everywhere. From now on, when the oil and gas industry comes knocking, she said, "it'll be hard to get people to believe there's nothing they can do."