Conan O'Brien is irrelevant, and he doesn't have to be 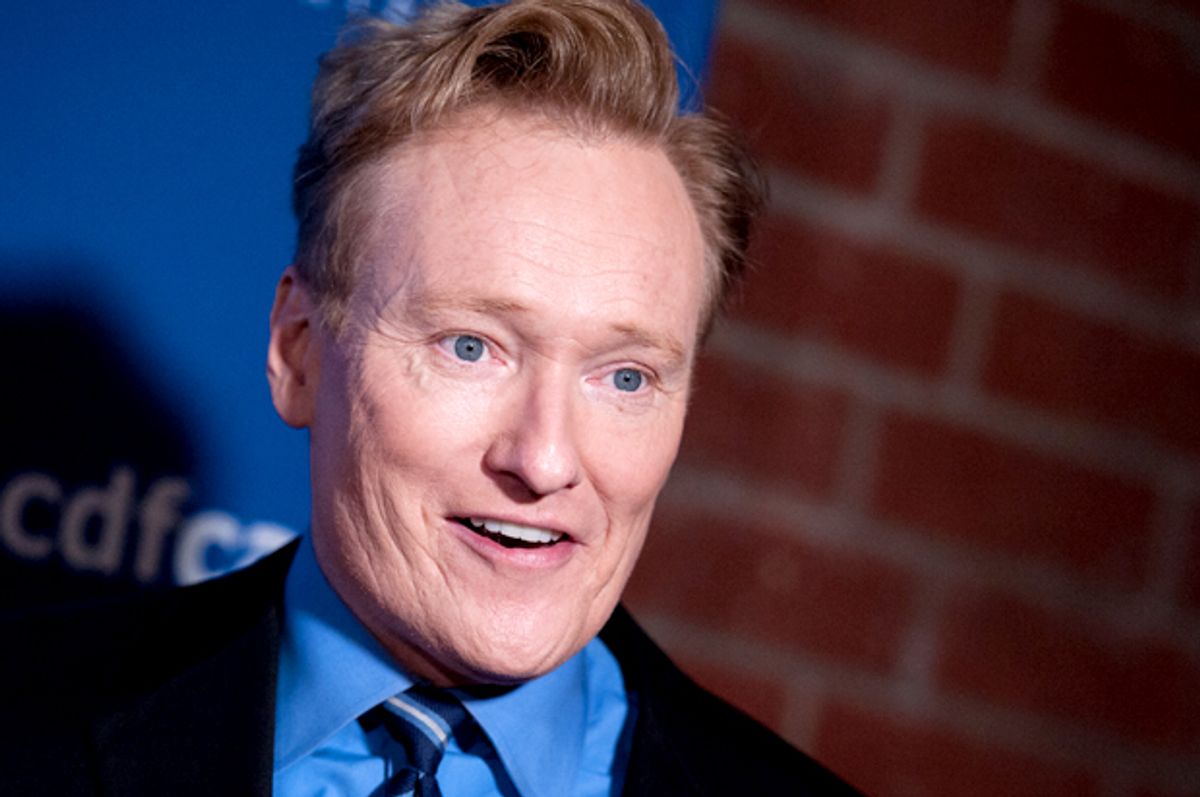 Last night, TBS aired a prime-time special highlighting the best of late-night host Conan O’Brien’s remote segments. “Conan to Go” featured the host taking a Lyft ride with Ice Cube and Kevin Hart, visiting an elementary school to write blues songs with second-graders, delivering Chinese food in New York, shopping at the American Girl Place doll store, playing “Grand Theft Auto 5” as the Clueless Gamer, and taking a class on how to audition for commercials. After an hour of genuinely funny improvisational moments—thanks to his razor-sharp improv skills, Conan can make ordering asiago chicken from a Wendy’s drive-thru funny—returning to the studio for his 11 p.m. show was a serious letdown.

The perfunctory opening monologue felt stale after watching him get wine-drunk in the American Girl Café with a doll that, O’Brien deadpanned, “like me, has skin damage and is prone to depression. We both have that dead-eyed, the best of our life is behind us, expression.” A bit on last-minute Christmas shopping, a riff on plastic Christmas trees? (“My tree has the same surgeon as Bruce Jenner!”) Followed by an uninspired holiday-themed audience-participation game built around the expense of licensing music for broadcast? Painful. His interviews are still solid—as the “tantric sex GoPro version of ‘The Hobbit’” pitched by Orlando Bloom last night proves—but the format as a whole now seems dull and rote.

O’Brien has been anchoring a late-night talk show since 1993, when he took over NBC’s “Late Night” from David Letterman. After his shaky first years, O’Brien hit his comedy stride; he breathed new life into the traditional role of late-night host.  But after the debacle with NBC and their aborted attempt to have him succeed Jay Leno as the "Tonight Show” host in 2009, something changed. The sense of fun began to drain from his hosting persona. And last night, no matter how proficient he may be at the gig, it felt like he was playing an expired version of himself working an outdated script. Seeing several brilliant remote segments back-to-back reminds us that he can be just as sharp and weird and funny as ever when he's not behind the hosting desk. After 600 episodes on TBS, he may just be better when he’s cut loose from the predictability of the studio format.

In an interview with Yahoo TV earlier this week, Conan threw out the names of several potential network late-night hosts (who aren’t white men), but he also questioned why some of them would even want the gig. On Key and Peele: “Absolutely brilliant. They have such brilliant observations, and they're so versatile. I absolutely love those guys. So I think yeah, they could have a late night show, but why? [Laughs.] Just do what you're doing, and we can see it at any time of night.” On Mindy Kaling: “If she wanted a late night show, I'd say, ‘Great! Do it! But why? You're getting to be funny the way you're funny right now.’”

Nearly five years after the “Tonight Show” disaster, he might ask himself the same thing. Granted, becoming the next Johnny Carson is a very tough dream to let die for comedians who came of age dreaming of that desk. Conan has never had the neutral, easy affability of Jimmies Fallon and Kimmel that makes them naturals at their jobs, but I’d rather watch Conan play video games (GTA strippers: “What do you want to do to us?” Conan: “I don’t know—uncross your eyes?”) than almost anything else the networks can rustle up after 11 p.m. Conan is good at his job. He could be great at another. It would be amazing to see what he could do on Comedy Central with a from-scratch concept and format, for example, now that “The Colbert Report” has ended.

The end of “The Colbert Report” and Colbert’s impending move to CBS to anchor “The Late Show” has understandably eaten up most of our collective late-night attention, but Craig Ferguson’s departure from his “Late Late Show” hosting gig also comes at an interesting time. Unlike many of his colleagues who have jockeyed for the more prestigious time slots, Ferguson says he never aspired to graduate to “The Late Show,” and that after more than 2,000 episodes, his job just felt repetitive. He told People the uncertainty he faces now feels refreshing after 10 years in the same job. O’Brien’s own contract with TBS runs through 2018. Maybe then he could break out of the standard late-night format for good and become something that, like “Colbert,” we didn’t even know we needed until we did.