Sony hackers' real crime: Why it's not an assault on speech -- but something worse

"The Interview" could still be released online. What's really under attack is not speech, but property. Here's why 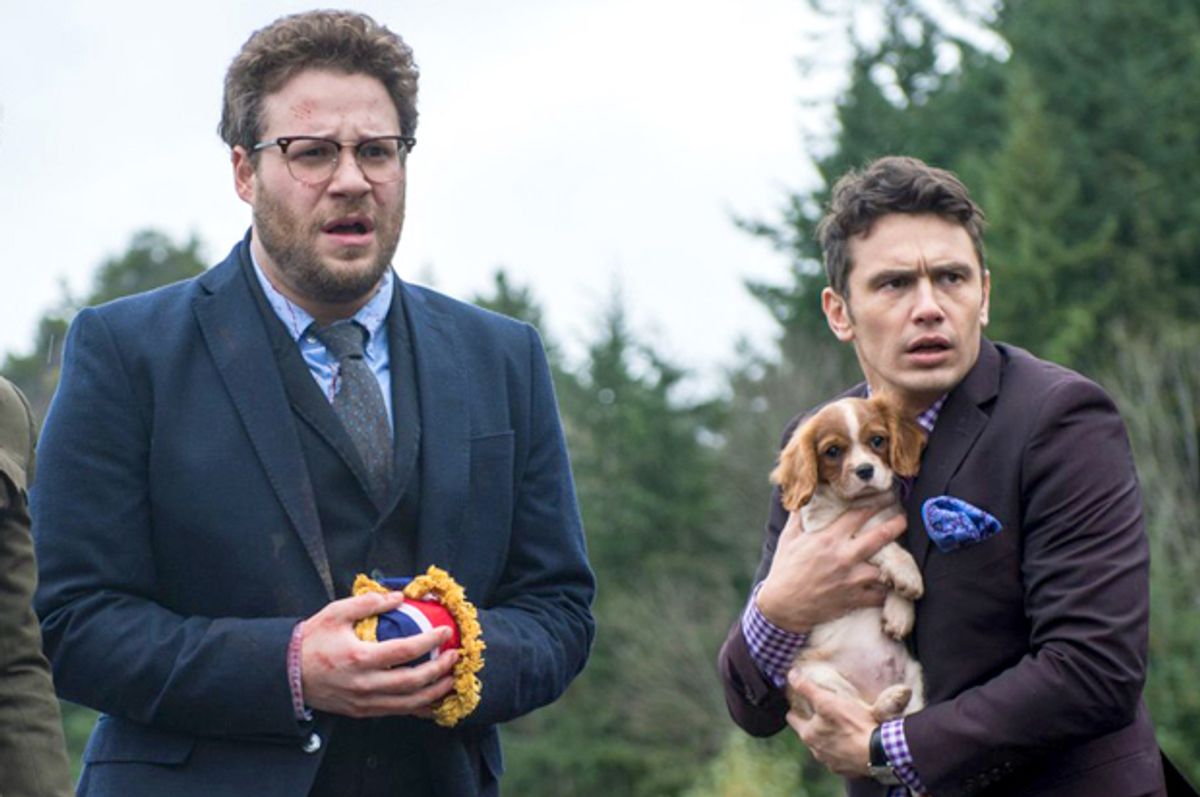 Seth Rogen and James Franco in "The Interview" (CTMG, Inc.)
--

Yesterday, Sony Pictures pulled its movie "The Interview" from release on Christmas Day. The movie, which depicts two journalists attempting to assassinate North Korean dictator Kim Jong-un, has been identified as the motive behind a devastating hack of Sony Pictures. That's partly because, in July, North Korea complained to the U.N., calling the film an "undisguised sponsoring of terrorism as well as an act of war." Then, hackers threatened "the world will be full of fear" if the movie premiered on Dec. 25, which led first the movie chains and then Sony itself to pull the release.

The decision comes amid new debate over whether North Korea really is the culprit behind the attacks. Wired journalist Kim Zetter -- who recently published a book on StuxNet and other hacks -- points out that the hack bears little sign of being a nation-state hack, and shows that hackers showed little focus on the movie until recently. But both the New York Times and Washington Post cite anonymous senior administration officials who say North Korea was "centrally involved" in the hack.

Curiously, claims that North Korea launched the hack make no mention of James Clapper's highly unusual trip to North Korea, just a few weeks before the hack was discovered, to pick up two Americans North Korea had imprisoned, claiming they were spies.

The decision to pull the film has been criticized as an attack on free speech, most notably by Aaron Sorkin, but also by other commentators. "Today the U.S. succumbed to an unprecedented attack on our most cherished, bedrock principle of free speech," Sorkin said.  And free speech is one of the things -- the last thing -- Sony addressed in its statement on the decision. "We stand by our filmmakers and their right to free expression and are extremely disappointed by this outcome."

The point is, there are many ways to release the film, most of which would not expose theatergoers and theaters -- in the wake of an altered liability landscape after the 2012 mass killing in an Aurora, Colorado, movie theater -- to any danger, no matter how remote. Most of those ways would result in far more people watching the film. Some of them might even result in a few North Koreans viewing it.

If the issue is airing the views in the film -- and defying the threats of the hackers -- such a release would accomplish the goal.

But there's another issue that seems far more central to this hack than speech: property.

Even before Sony mentioned its filmmakers' free speech rights, for example, it mentioned the assault on its property rights. "Those who attacked us stole our intellectual property, private emails, and sensitive and proprietary material." And while free release of its movie would assert its right to free speech, it would result in further financial losses, on top of the other movies (such as "Annie" and "Fury") released on piracy sites after the hack.

Sony's efforts to defend its property rights are another thing that have been exposed by this hack, on top of Hollywood stars' personal data. The hack revealed, for example, that the female stars in "American Hustle," including Jennifer Lawrence, got paid less -- 7 percent of back end profits as opposed to 9 percent -- than their male counterparts. It also revealed that only one of the top paid staffers at Sony is a woman.

More interesting, still, the hack revealed that the Motion Picture Association of America is contemplating ways to erase piracy sites from the Domain Name System -- which works sort of like the Internet's phone book -- of the Internet. The MPAA tried, and failed, to get this ill-considered idea passed by Congress back in 2011. Now it is apparently trying to find other ways to break the Internet to protect its property rights. That includes big donations to state attorneys general and lobbying for the AGs to take on Google, which stands in the way of this DNS plan.

The attack on Sony's property, even more than speech, raises real questions about another detail that has gotten far too little attention during coverage of this hack. Sony Corp. gets hacked a lot, more than 50 breaches in 15 years, and more than some of its rivals, including some fairly significant attacks in recent years that bear no resemblance to this attack. Maybe that's because it did things like store all its passwords in a file called "password."

As a lawsuit against Sony by two former employees alleges, "Sony failed to secure its computer systems, servers, and databases ... despite weaknesses that it has known about for years, because Sony made a 'business decision to accept the risk' of losses associated with being hacked." And yet the security of its computer systems is one of the chief defenses of its property, one of the few things that protects intellectual property that can be digitally copied and distributed worldwide.

None of that excuses the hack or minimizes the serious damage to a lot of completely innocent people.

But when an intellectual property company like Sony suffers an attack that undermines much of that property, we'd do well to distinguish between an attack on free speech or on a certain fragile kind of property.