The Year in Fear: From Ebola to street violence to Comrade Kim 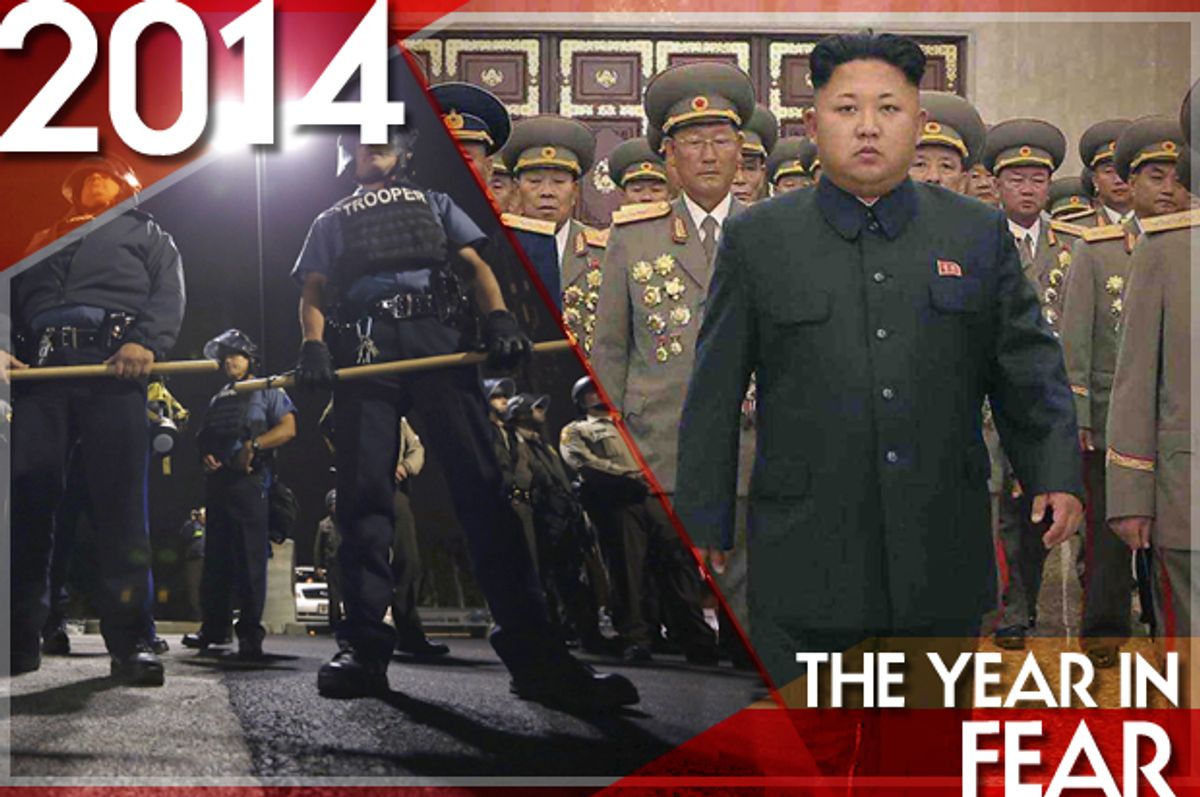 There a lot of things about the Sony Pictures hack attack and the resulting cancellation of the Seth Rogen-James Franco movie “The Interview” that don’t make sense. It isn’t just that the entire episode feels fictional; it feels like a stretch as a fictional episode. Some upstart satirical novelist fresh out of the Iowa Writers Workshop writes a book in which the dictator of North Korea, the nation where every day is Throwback Thursday, forces a multinational media corporation to kill a Hollywood comedy built around a couple of snarky, self-referential stars. Two versions of meta-reality collide: the delusional gaze of dead-end Leninism meets the smug smirk of dumbed-down postmodernism, and the world explodes. Oh, come on. Couldn’t happen.

But it fed our fear. It fed our love of fear. We are a nation addicted to fear. We seek it out wherever we can find it, and we cling to it. When it doesn’t exist, we invent it. We manipulate it for cynical purposes, to sell bad products and push bad ideologies. How much have you heard about Ebola and ISIS since the Republicans won their glorious victory in the midterm elections? We invoke it soberly, on both the right and the left, as a warning from the heavens urging us to repent of sin and choose the path of righteousness. If a Bible-thumping preacher inveighing against gays and Muslims taps into our love affair with fear, so does every left-wing warning of eco-catastrophe, from Rachel Carson to Al Gore and beyond.

Not all fears are equally unreasonable, to be sure. But if we can never agree about exactly what to fear, we are unanimous in embracing fear itself, and we line up to suckle poisonous milk from its brain-freezing breast. Fear is a powerful and dreadful thing, a toxic and odorless gas that permeates all thought and all substance. It conquers reason and love. It makes us shriveled and small-minded. A society ruled by fear stumbles along from crisis to crisis, guided by no clear principles and riven by contradictory impulses. It chooses leaders who feed the fear and leaders who promise to banish it (often the same people). In the name of conquering fear, it ends by giving up everything that is not fear. Constitutional freedoms, the ideals of democracy, civil rights and even the sanctity of the human individual, perhaps the greatest innovation of capitalism – all are subjugated to the Ministry of Fear.

Here’s the detail in the Sony/”Interview” snafu I keep getting stuck on: Apparently sane and normal people had to pretend, if only as a term of art or a legal fiction, that there was something to be afraid of here. We had to “assess the risk” that the incoherent threat made by Kim Jong-un or whoever-the-hell against people who went to see “The Interview” in movie theaters, represented actual danger in the real world. (The more I reread the backward syntax and throttled grammar of that message – “Whatever comes in the coming days is called by the greed of Sony Pictures Entertainment” – the more it sounds like the work of some cackling, bearded anarchist in Brooklyn.) I don’t mean the microscopic, act-of-God danger that can never be eliminated: A plane might crash into my house before I finish writing this column, or whatever. We had to sit around like an entire nation of TV pundits pulling on our chins and consider the possibility that the North Koreans were actually going to blow up a suburban movie theater in Syracuse or San Antonio.

Well, no, it probably won’t happen (said the sane and reasonable people, and their lawyers), but there was a threat. A “threat”! It’s not worth the “risk.” Just imagine the carnage in the food court, and the horror at Sunglass Hut, if the Shoppes at Fox Run Estates became the target of a North Korean nuke attack. We can’t be too safe. Well, here’s the thing: You can be too safe, and in a certain sense Americans are too safe. At least, we are too cosseted from life in the real world, too securely packaged in the polyvinyl peanuts of our consumer lifestyle, too oblivious to real dangers and too fixated on imaginary ones. Can I tell you for certain that no one would have gotten murdered for watching “The Interview”? No. But I can tell you that those moviegoers were far more likely to die in car accidents on the way to the mall, and that the fear of that vanishingly small possibility is more destructive than the possibility itself.

You could say that every year since 2001 has been a year of fear in America, but 2014 feels special in this regard. There were enemies both foreign and domestic to fear; there were numinous psychological terrors and dreadful real-world events. It was a year of racialized fear and sexualized fear, a year when citizens felt under attack by law enforcement and the intelligence bureaucracies, and vice versa. We were instructed to fear a deadly new plague and a murderous new Islamic cult, both presented as the potential end of civilization and requiring the further renunciation of democracy and due process. To end the year by abandoning a stupid movie in terror of a cartoon dictator from an impoverished and isolated country 6,000 miles away was entirely too fitting.

If there’s one thing we know about Darren Wilson, the white police officer who shot Mike Brown in Ferguson, Missouri, it’s that he genuinely felt afraid. Now, the reasons why Wilson felt afraid of an unarmed black man, and believed he had no alternative but to use lethal force, belong to a long and pathological skein of hatred and fear stretching deep into American history. I understand why many people wanted to see Wilson prosecuted, along with the other perceived rogue cops of 2014. But Wilson did not invent the climate of fear that makes black men and boys appear threatening to authority figures whether or not they are armed, and whether or not they are doing anything illegal or confrontational. He was soaked in that fear, like a piece of human litmus paper, and was too weak to resist it.

It might be tempting to conclude that the cases of Brown and Eric Garner and Tamir Rice and the other unarmed African-American males killed by cops this year were isolated instances that got blown out of proportion, rather than evidence of a larger pattern. But the fear-driven and intensely racialized response to those killings suggests otherwise. In the zero-sum game of American racial politics, a distressingly large number of white people interpret any criticism of the police, and any discussion about enduring racial prejudice or white privilege, as an all-out assault. Like everybody else of any color who has tried to write about this issue, I’ve been barraged all year long by correspondents eager to discuss the purported epidemic of black-on-white violence ignored by the media, Barack Obama’s impending “final solution” to the white problem, or the coming alliance between ISIS agents and urban black radicals aimed at overthrowing the U.S. government from within. (I heard about that one, from a self-styled terrorism expert, just last week.)

I’m not suggesting that most white Americans manifest that kind of extreme paranoia. But it isn’t as rare as those of us in liberal coastal cities would like to believe, and even the crude data of public opinion polls suggest that the climate of fear that enabled Darren Wilson is widespread in white America. Like so many other things about our perishing republic, this is paradoxical. Amid all this psychic distress, it’s easy to overlook the objective facts: Violent crime is at or near a 50-year low in this country, and by some measures an all-time low. The overt racial discord and confrontation of the 1960s and ‘70s is largely absent from American life (or at least it was, until very recently). A black man with a foreign-sounding name has twice been elected president, by comfortable margins.

If white Americans – who are and remain a uniquely wealthy, privileged and protected group as a whole -- choose to view themselves through a prism of fear, invoking the same rhetoric of victimology they often claim to despise in others, they are not alone. We saw a similar defensive reaction among men during the hashtag war that erupted after the Santa Barbara shootings last spring, as if the #YesAllWomen consciousness-raising moment, which could have provoked thoughtful reflection, had been a call for a feminist police state and universal castration. Instead we learned that #NotAllMen are violent creeps. Well, congratulations.

Both of these fear-driven reactions are mimicked again, and repeatedly, on the national scale. Americans seem determined to process the trauma of 9/11 – which at this point feels like the cherished and nourished trauma of 9/11 – by convincing ourselves that we’re not actually a blundering imperial superpower but an embattled underdog, about to be overrun from outside and eaten away from within by a legion of comic-book supervillains. I’m aware this is nothing new. This current of xenophobia and panic, the terror that our shining city on a hill will be corrupted by savages and pagans, goes back at least as far as the Salem witch trials. With the delusion known as American exceptionalism comes the delusion of persecution. Remember the scene in “Fahrenheit 911” when Michael Moore gets people in the Michigan backwoods to explain why their county is a likely target for Islamic terrorists? They hate us for our freedom!

After the Edward Snowden revelations, and after the Brown and Garner grand jury decisions, many of us have found new reasons to fear the state apparatus, whether in its covert form or its paramilitary street-level domestic operatives. As I said earlier, not all fear is unreasonable, and those fears may find both positive and negative modes of expression. I will never know the vulnerable feeling of being an African-American potentially subject to street harassment, arbitrary arrest or summary execution by police. What is most noteworthy about the widespread and generally peaceful demonstrations in response to the Brown and Garner cases, in fact, is that they represent not the triumph of fear but a triumph over fear. The anguish, grief and fear of black people and other citizens have been translated into social action – into people on the street together, which is the most powerful antidote to fear.

Executives at Sony could perhaps have summoned the possibility of social action – if they lived in some alternate universe where they believed in something beyond corporate ass-covering. Since they don’t, they ditched a film they never believed in, in response to a fear they didn’t really feel, because the lawyers told them to. A profile in courage that sums up the year in fear just a little too well.