My night at the cuddle party

After seven years without a date, I was desperate to be touched. Desperate enough for weirdness like this 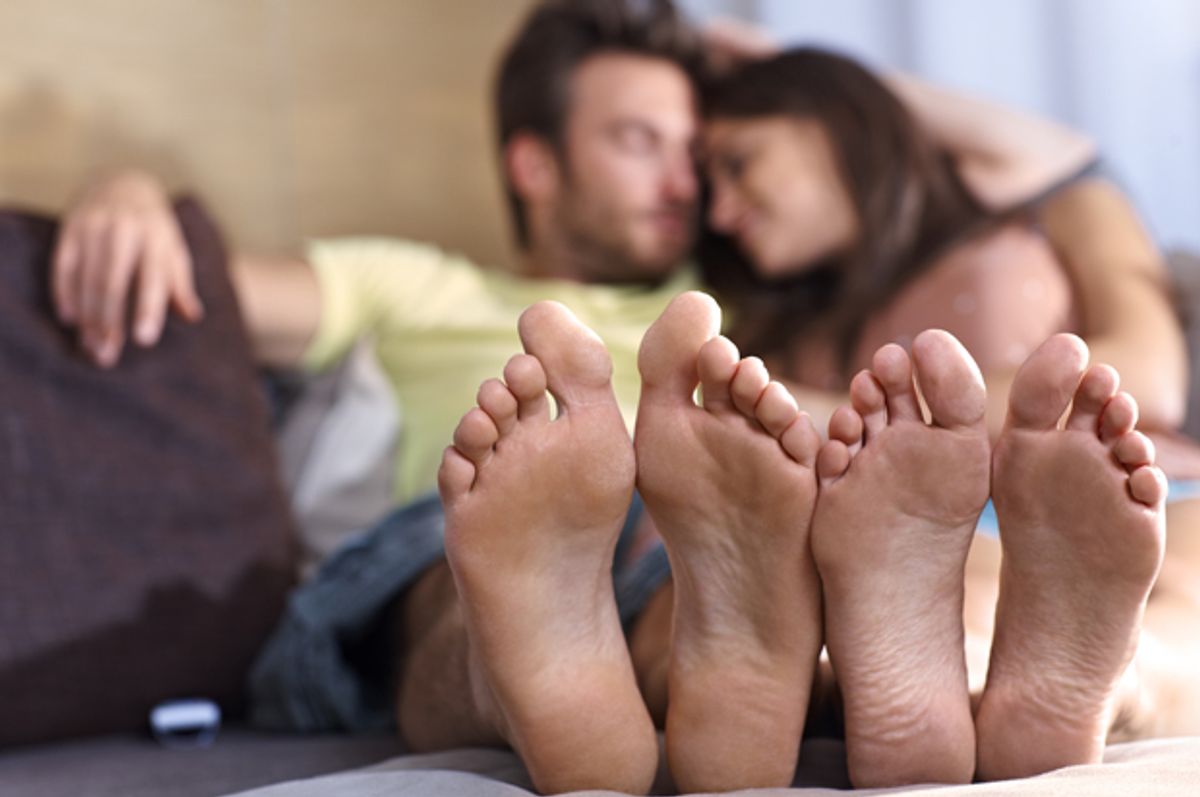 It had been 10 years since I walked away from the seminary; seven since I’d had a date. I was 33, and had moved to New York only six months before. I read about a Cuddle Party in Hell’s Kitchen and I figured it would be a sideshow, but maybe a safe way to get back in action. I found the posting on Craigslist.

I copied the information, closed my laptop, showered and flossed in my Brooklyn studio sublet. Then I headed to the address where the party was to take place. I was excited, but I might have been delusional from not having been touched in so long.

“Welcome to Cuddle Party. I’m Harry,” said the man who opened the door. He was in his late fifties with a fading hairline, and wearing shiny blue silk pajamas with white piping, like Hugh Hefner. His voice was slow and creamy. Harry took me in his arms, swaying me back and forth, then whispered in my ear, “thirty bucks.”

I started feeling around his waist to see if he had anything on him, handcuffs, a gun or wireless mic. I actually hoped I was getting involved in something tawdry. I wanted  to be bad. Whenever I’d tried, I’d failed miserably. Harry didn’t have anything on him, but I couldn’t stop rubbing, I loved the feeling of his pajamas.

The “Center” was a basic two-bedroom apartment with a large living room. There was crown molding, a fireplace, dusty ferns everywhere and a sloping, worn-down hardwood floor covered with blankets. Ten people, split evenly between men and women, mostly in their forties, sat around a guy in front of the fireplace. Everyone looked very nice and very pathetic, which is par for the course when a group of single strangers hang out out in their pajamas. I’d mistakenly worn a two-button charcoal gray suit, trying to make a good impression.

I scanned their faces. I was worried nobody would want to be with me. I checked to see if anyone was looking my way. I didn’t know if it was because I was late or because of my attire, but they were all staring at me.

“I’m Jonathon," I said and waved. They waved back.

"Thank you, Jonathon,” the man in the center said. “Welcome. I’m Reid.”

Reid sat, legs crossed, in front of the fireplace. He had shoulder-length blonde hair and strawberry lollipop lips. His pajama pants were dotted with little Garfield heads and his T-shirt read “Got your snuggle on?”

Reid was a relationship coach and lecturer who traveled the country giving workshops on sex. As I found a seat against the wall, out of the circle, he told us how he and a friend started these parties to create a safe environment for people to explore consensual, non-sexual touch, to learn limits and find their boundaries. Then he got down to business. The party would last for about three hours. The only rules were:

You don’t have to cuddle if you don’t want to.

KEEP SNACKS OFF THE BLANKETS.

“We always start with an icebreaker,” Reid said, rubbing his hands together like he was rolling meat into a ball. “You’re back in college. You’ve been hitting the keg hard. The night’s coming to an end. What’d you do?”

“Everybody,” said Harry. Everyone laughed.

From going for milkshakes to buying lottery tickets, no one had the right response. Reid, frustrated, took a deep breath.

“After a night spent getting bombed, tanked, whatever you want to call it, you go cow tipping. OK?” he said, exasperated.

Reid asked us to get on all fours and start crawling around like cows. I loosened my tie and got down.

“Now say hi to the other cows you encounter with a hearty moo,” he said.

Religious people love icebreakers and Catholics have a long tradition with the genre. In preparing for the seminary, I’d been to enough retreats that I felt I'd mastered the art of the forced introduction. Yet the prospect of this one had me worried my desperation to be with someone had pushed me into an afternoon I was already regretting.

I looked around. Each person got into the face of whomever they crawled up on and belted out a moo.

“Moo… moo… moo.” The words echoed through the room. Each moo I heard made my heart close up a bit more. Whatever I had envisioned as a new understanding, I now saw as despair. How did I let myself get to this point?

I grew up in a poor Italian family in Chicago with my mom and three older brothers. We never learned about handshakes. In our house we hugged other people – for everything. Hugs were meant to be tight, last longer than it takes to fry up a neck bone, and leave an impression. When my brother's actor friend Mandy came over, my mom always hugged her. “That hug took all the pain of my childhood away," Mandy once said.

She was stoned, as were most of my brother’s friends, but I got the point. Human touch was important. It’d be nice to say I was lost when it came to intimacy, but that would imply I had a destination.

“Now pretend like you’ve been tipped and fall to the floor.”

We all fell on our sides at once.

“Isn’t this a great way to get to know someone? Okay. Cuddle time! Also, the snack bar is now open,” Reid said.

This was worse than trying to meet somebody at a bar. At least there you’re not forced to talk to anybody while pretending to be a cow.

A woman moved close to me. She had caramel hair pulled back in a bun, an adorable face and a sizable body.

“I’m Sue. Would you like to cuddle?” she asked.

I froze. What the hell was I doing? My emotional well-being aside, there was the sheer physicality of it all. Sue had at least four inches on me and weighed, I guessed, 250. I was 150 on a good day. How would it work?

"Jonathon?" she said again, tapping my shoulder. "Don't you want to cuddle?"

My fear was overcome by the possibility of what might happen, of what I might find out. I had never been with someone so much larger than I was.

“I’d love to," I said. Before I could strategize, she started rolling toward me. As she did this, I felt myself rolling away. Sue kept rolling toward me until I was pinned against the wall.

“You have nothing to worry about. You’re going to love it,” she said, taking her arms and grabbing my torso. “Roll over.”

Her touch frightened me and I elbowed her in the stomach. She had momentum and pressed on, maneuvering me so my back was to her chest. Then she pulled me in close, wrapped her right arm over my shoulder, startling me again as I swatted it away.

“Don’t worry,” she said and stuck her left arm under my head and gave me a squeeze.

As I settled in, I felt her soft breath against my ear. "I remember my first time. It was a Bon Jovi concert. I was standing next to this beautiful man. I don't know how or why, but we locked eyes and he asked 'what's wrong?' There was something about him because I just opened up. I told him men don't understand me. He said, 'Honey, I understand you. We speak the same language.' Then he took me in his arms and said 'You  need a cuddle.’ He held me right there in the middle of the concert. I'll never forget it. They were playing 'You Give Love A Bad Name.' I've been cuddling ever since."

For a moment we lay there in silence. Then her lips touched my neck and she started talking again.

“You know he sees himself as the Martin Luther of sex,” she said.

"This was a treat, Jonathon," Sue said, caressing my arm. “Don’t worry, you’ll get the hang of it.”

We stood and hugged each other goodbye. I didn’t want to let go. She immediately went to cuddle with someone else. I went to the snack table and got some pomegranate juice.

A man eating a cookie introduced himself as Tom. He had a British accent and was wearing flannel pajamas.

“Are you into tantra?" he asked.

“Why don't you come to a demonstration here?”

“To give people a taste?”

“Yes, but we don’t give anything away. It’s just a showing.”

“Where do you set up the station?”

“In the front of the room.”

Tom excused himself to go to the bathroom. In the corner by the window, I spotted a woman in her late twenties with thick, dark hair, who, for whatever reason, I hadn’t noticed before. I got on the floor next to her. We smiled at each other. She turned on her side and pushed her back into my chest, and I put my arms around her without saying anything.

Her hair was the color of soy sauce and smelled like Febreze. I couldn’t stop sniffing. She started rubbing my thigh. The touch startled me and I pushed her hand away. I apologized.

“This is my first time,” I said, talking into the nape of her neck. “You can touch me wherever you want.”

As soon as the words came out I realized how stupid I sounded.

“Have you done this before?” I asked.

“Every chance I get,” she said. “It helps me get through the hard times.”

“Are you dealing with something difficult right now?” I asked.

“The last party I cuddled all the pain of Rwanda away,” she said.

“I’m so sorry. Were you involved with Rwanda?” I asked, tightening my embrace.

“No, but it hurt and this really helped.”

Shortly after, we got up.

“This just takes time,” she reassured me, giving me a hug.

“You’re a great hugger,” she told me.

On my way out, Reid thanked me for coming and let me know he was in the process of developing some new projects – I was welcome to come back when they were finished.

“What kind of projects?” I asked.

“Yes. They’re holding women back and I’m determined to stop it.”

“How are you going to do that?”

“I’ll keep it in mind,” I said. I thanked him and walked out the door.

On the way home I stopped at a coffee shop. I ordered a mocha, proud of myself.

I had done something about my life and that was enough for now.

JD Irpino is a writer based in New York. He recently finished his first book.