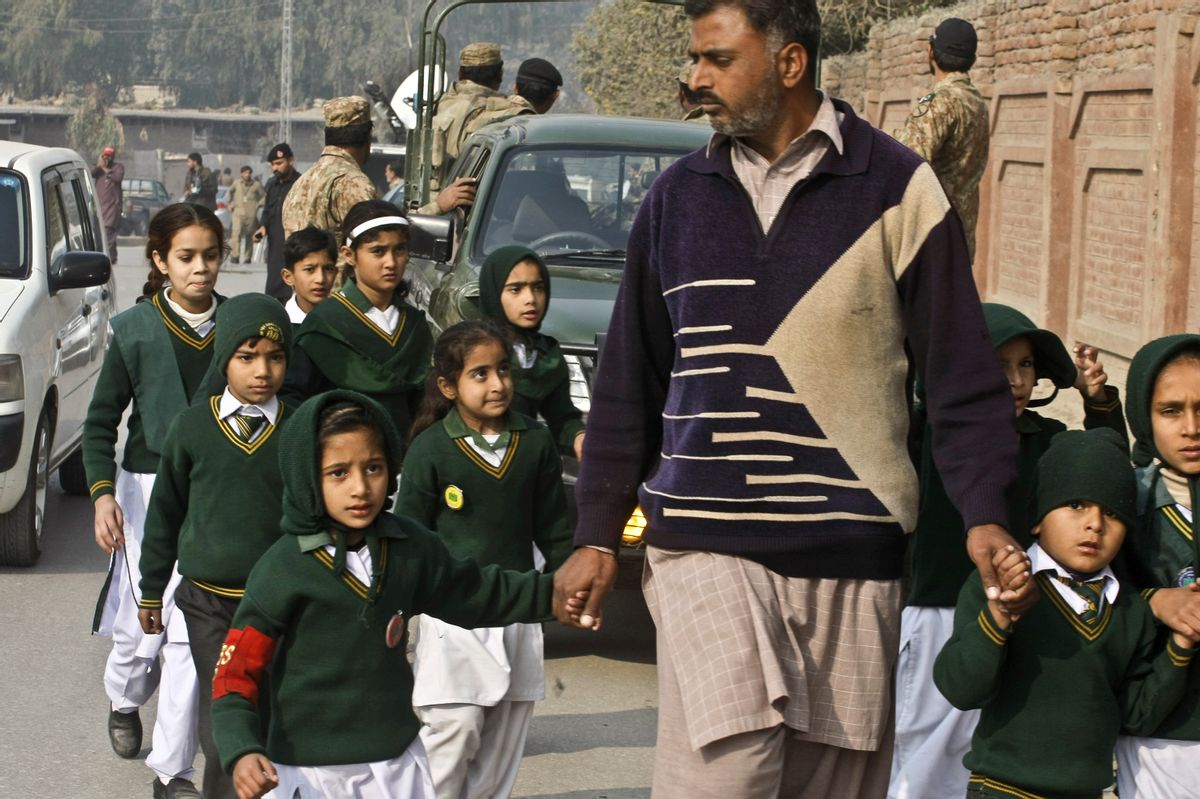 A plainclothes security officer escorts students evacuated from a school as Taliban fighters attack another school nearby, killing148 people, mostly children, in Peshawar, Pakistan, Tuesday, Dec. 16, 2014. U.S. Secretary of State John Kerry condemned the attacks: "Mothers and fathers send their kids to school to learn and to be safe and to dream and to find opportunity. And particularly at this military school in Pakistan, they sent their kids there with the hope and dreams of serving their country. Instead, today they are gone, wiped away by Taliban assassins who serve a dark and almost medieval vision, and the opposite of everything that those mothers and fathers wanted for their children." (AP Photo/Mohammad Sajjad) (AP)
--

In the Middle East and the wider region this past week, Taliban gunmen attacked a school in Peshawer, Pakistan, killing 148 people —most of them children — in what was one of the country's deadliest attacks in years. In the days that followed, families buried the victims of the massacre, residents held vigils and the nation mourned its loss.

As the dead were buried, even a local gravedigger was moved by the amount of young victims, breaking down into tears. Survivors were treated in nearby hospitals, where some clung to dear life.

In Iraq, Kurdish forces made a push against Islamic State militants near Sinjar, opening up an aid corridor to help relieve thousands from the Yazidi minority trapped on the mountain overlooking the town.

In the West Bank, protesters clashed with Israeli troops after a prayer for Palestinian Cabinet minister Ziad Abu Ain, who collapsed and died shortly after a protest on Dec. 10 in the West Bank village of Turmus Aya.

In Israel, Jews celebrated the beginning of Hanukkah, an eight-day commemoration of the Jewish uprising in the second century B.C. against the Greek-Syrian kingdom.

In Egypt, the gay community went deeper underground after police arrested dozens of men at a Cairo bathhouse in a raid featured on a lurid TV tabloid program stirring up public panic over "debauchery." The government is cracking down on gays, activists say, to promote its credentials as protectors of public morals.

And in Abu Dhabi, after oil prices dipped to their lowest point in five years, Saudi Petroleum Minister Ali Naimi dismissed allegations that his kingdom conspired to bring down oil prices in order to harm other countries, telling a summit of Arab energy leaders that he was confident the market would stabilize.