Carly Fiorina's '16 pipe dream: Why her campaign will be a right-wing sideshow

The former CEO won't embarrass her party, but here's why she will never win its nomination 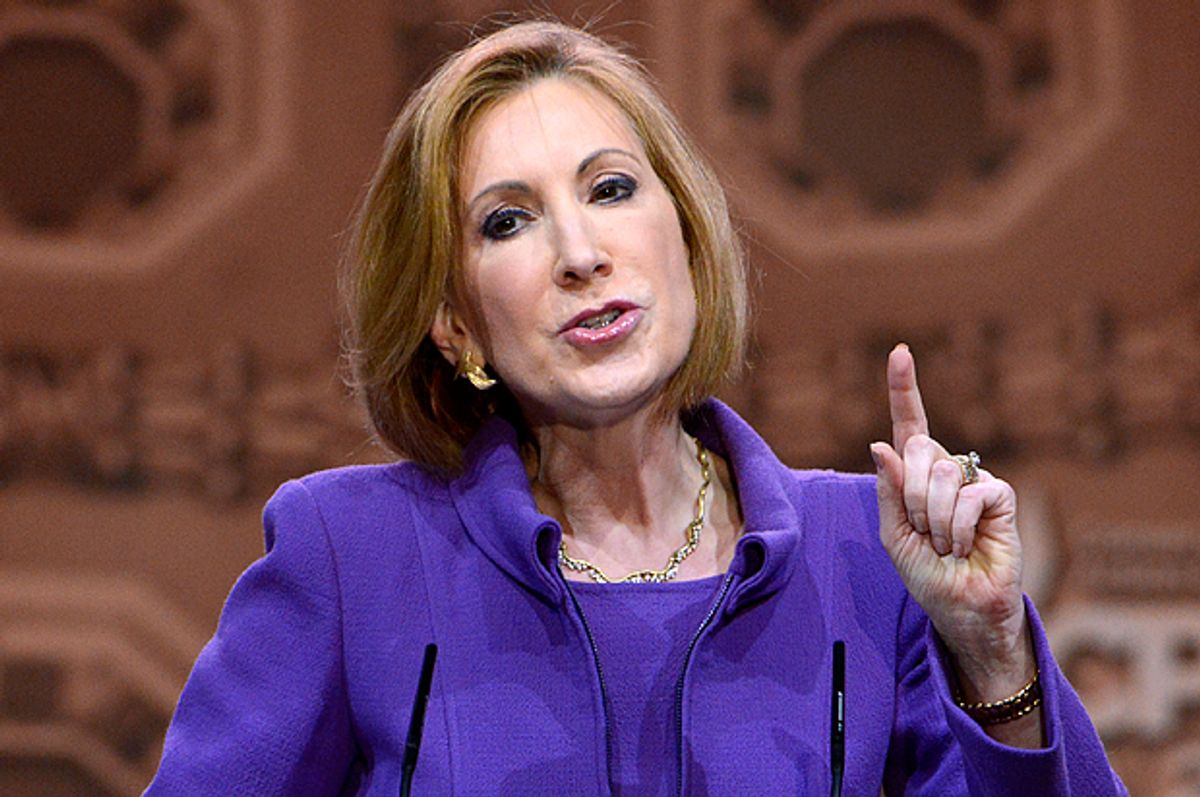 So last week Jeb Bush put on a hat in anticipation of some point soon throwing it into the presidential ring. Rand Paul and Marco Rubio are bickering like Archie and Edith Bunker over Cuba and what the word "isolationist" means. (Paul is very pleased with his Eddie Haskelesque move to tag Rubio with the hated moniker.) Chris Christie glumly walked around with President Obama again trying desperately not to appear as if he likes it. Scott Walker is bbusily trying to figure out how to use the auto-correct on his phone. Rick Perry is sporting some very sharp new costumes. Ben Carson is rewriting the constitution. Mike Huckabee is milking his million dollar payday for as long as he can while Bobby Jindal desperately tries to get somebody, somewhere, to pay attention to him. The Republican presidential candidates come from every corner of the country and represent a variety of different GOP constituencies. They have governors and senators and TV personalities. They even have two medical doctors!

But for all that talent and diversity something has been missing. Hmmm, let me think. What could it be? Oh right. They forgot to include a woman. Ooops.

But it looks as though that's about to be rectified:

Carly Fiorina is laying the groundwork for what one ally says is an "imminent" presidential campaign—one that could launch as early as next month.

The former Hewlett-Packard CEO, who raised her political profile with a failed run against Sen. Barbara Boxer of California in 2010, has frequently been mentioned as a long-shot contender to seek the Republican presidential nomination. The speculation is driven by equal parts novelty and activity: Fiorina, who paid several high-profile visits to early-nominating states in 2014, acknowledged that she would likely be the only woman in the GOP field.

Whew! In a contest that's going to feature at least one woman on the Democratic side it would be more than a little bit embarrassing to see all those men on the stage without even a token female. Since the transition of Sarah Palin to full-fledged reality TV and tabloid star, there just hasn't been anyone obvious to prop up there. People have talked about South Carolina Governor Nikki Haley and New Mexico Governor Suzannah Martinez, both of whom would be highly qualified, but they haven't shown any serious signs of wanting to do it. There are four women GOP Senators, Ayotte, Collins, Murkowski and Fisher in the current congress but none of them are on any public short-lists that I'm aware of. Senator-elect Joni Ernst, whom Luke Russert calls the "Crown Jewel" of the GOP, may be ambitious but she's probably going to have to wait at least one term before she can conceivably lead the nation. And there are, of course, the GOP congresswomen, more than 20 of them in the new congress, none of whom seem to want to follow in the footsteps of Michele Bachman (which is understandable.)

So, along comes Fiorina, ready once more to take one for the team and spend millions of her own money in a losing race for high office. And she's a three-fer. Not only is she a woman, she's a failed CEO and failed Senate candidate too! (Not that there aren't plenty of the last two available in Republican politics.)

No one knows for sure what she is really after --- it certainly isn't the presidency, which is completely out of reach. But she has been planning this move for quite some time. She became the chairman of the board of the American Conservative Union foundation, the group that sponsors the annual CPAC Convention that showcases the most important right wingers in the country. It's unlikely that the Chairman of the Board will be denied a prominent speaking role. She's also slated to give the keynote speech to the Council for National Policy meeting this year, one of the most important gatherings of influential ultra-conservative players in the Republican Party.

And she's not faking it. As her extraordinary loss to Senator Barbara Boxer in 2010 illustrated she is very right wing. Despite the middle of the road image some might confer on her as a pragmatic business woman in a man's world Fiorina is a hard core social conservative. She is anti-abortion and anti-marriage equality. She does draw the line on "personhood" but then so do the voters of Alabama, so that's hardly a litmus test. This businesswoman is perfectly willing to say that the the jury on climate change is still out and loves energy company money, especially if it comes from her good friends the Koch brothers. She is so hardcore on guns that she argued forcefully for the constitutional right of people on the no-fly list to bear arms. She heartily supported Arizona's anti-immigration law SB-1070. (You can see why she lost in California by more than 10 points.)

And that brings us to Fiorina's likely role in this upcoming presidential campaign. While nobody sees her as a president she has that highly regarded Republican characteristic of a mean sense of humor and has proven herself adept at delivering the zinger to a female rival for which a man would be criticized as ungallant if not outright sexist. The Republican presidential boys club needs someone in the pack who can do that dirty work for them. And Fiorina is their gal. For instance, in her most notorious campaign ad of 2010, Fiorina responded to Boxer's claim that "one of the very important national security issues frankly is climate change,"by turning to the camera and snidely quipping, "Terrorism kills, and Barbara Boxer's worried about the weather."

Hiyo! But she has also been known to get herself into trouble as when she was caught on tape being a mean girl in a much too stereotypical way --- she said a friend had seen Boxer on TV "and said what everyone says -- God, what is that hair?" Mike Huckabee undoubtedly chuckled loudly at that swipe but it flopped with women. Fiorina has probably learned her lesson and won't go there this time.

Fiorina won't embarrass the party the way Michele Bachman did when she served water to all the male candidates during one of their debates. And nobody will ever be able to shame them the way Sarah Palin did ... always. She is a more mature public figure with at least a modicum of gravitas. But in the end, her role in the campaign will be the same as theirs -- a sideshow. That's what Republican women candidates for president always are and she's nothing if not a good team player.