Conservatives just aren't funny: Why the right will never have its own Stephen Colbert

Stewart and Colbert are passing the torch to John Oliver and Larry Wilmore. Where is the right's breakout star? 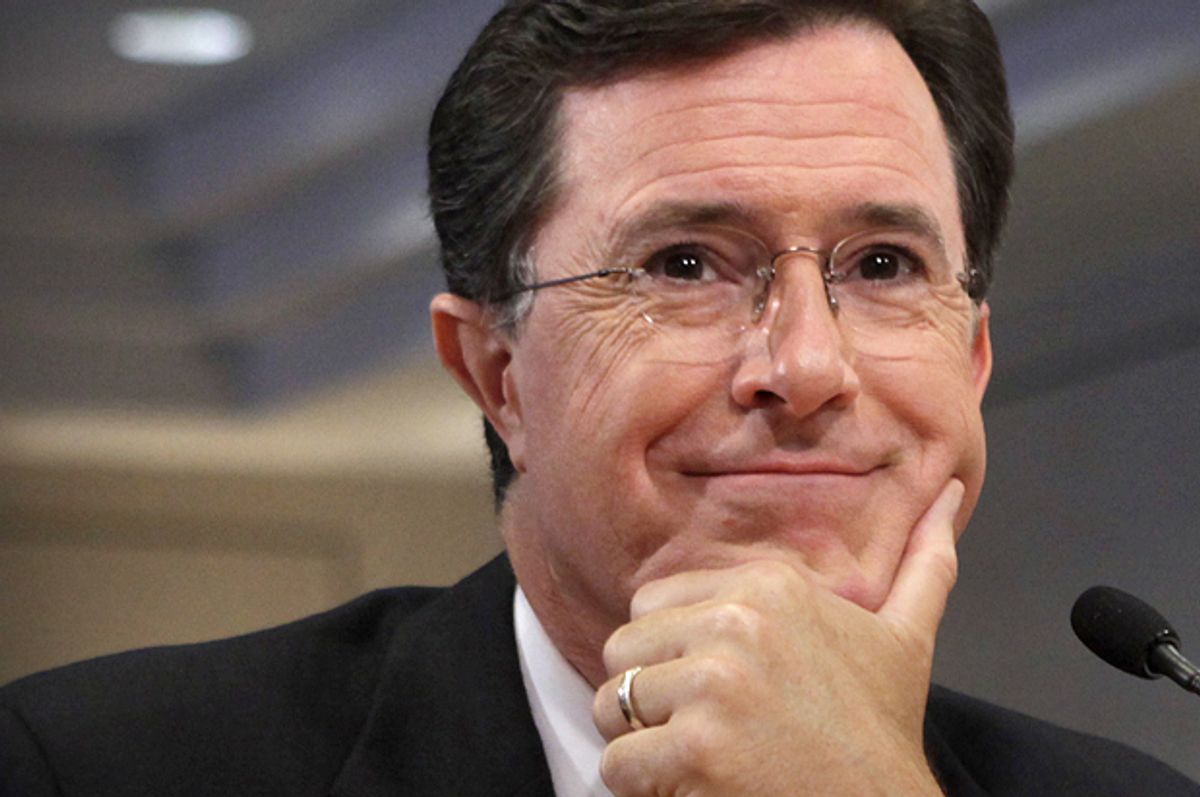 After nine years at the helm of The Colbert Report, where he turned his brilliant right-wing persona into a sprawling marketing empire (see your grocery's freezer section), explained super PACs to everyday Americans, enlightened us about divinity, and added "truthiness" to the nation's vocabulary, Stephen Colbert said his farewell to the Colbert Nation this week to become CBS's new Late Night host. (Sans persona.)

For nearly 10 years and more than 1,400 episodes, Colbert remained a constantly amusing and insightful part of our national dialogue. "Fans of the show and its indomitable host (only now defeated by the real-life lure of late-night respectability) have good reason to mourn," noted The New Yorker earlier this year, while Salon recently crowned Colbert "one of the most important figures in U.S. political comedy of all time."

By embracing the absurd and truly embodying it, Colbert has made politics and public policy uproariously funny, while providing much-needed bouts of sanity for devoted news junkies.

His satirical voice won't be gone completely, of course. Colbert's late-night colleague Jon Stewart continues to soldier on with The Daily Show, that show's alumni John Oliver is doing fine work at HBO, while another, Larry Wilmore, readies his turn to take over Colbert's late-night Comedy Central slot.

But there's no denying Colbert's exit from Comedy Central marks a cultural and political milestone of sorts. The exit is disheartening not only because the genuine laughs will be missed, but because Colbert's satirical work has been instrumental in spearheading progressive arguments and critiques for years.

Colbert's departure also reminds us how hollow conservative comedic efforts have been, as they fail to play catch-up in the cultural war of political satire. Humor remains a rhetorical weapon that American conservatives simply cannot harness.

Maybe that's because political comedy usually doesn't work well when it's anchored in seething hatred or even casual contempt, the type that conservatives hold for President Obama. Political satire works best when it's fueled by curiosity, bewilderment, annoyance, and with a dash of self-righteousness mixed in. And for nine years, Colbert has been deftly mixing that cocktail on The Colbert Report.

Indeed, over the last decade Stewart and Colbert emerged as the Mantle and Maris of political satire, revolutionizing the way viewers, especially young ones, consume news. They're two giants whose staffs added DVRs to the liberal arsenal, catching their favorite target, Fox News, in an array of uproarious bouts of hypocrisy, while puncturing their endless bouts of Obama Derangement Syndrome.

Colbert once described his character as a "well-intentioned, poorly informed, high-status idiot." One reason the on-air Colbert has resonated nationwide, of course, is that Fox News is currently filled with closed-minded millionaire hosts who perfectly mirror the buffoonery Colbert projects every week. Colbert has been blessed with cable news doppelgangers (Bill O'Reilly, Sean Hannity, Steve Doocy, etc.) who make The Colbert Report laughs entirely authentic. And for liberals, they're who make the guffaws all the more appreciated (i.e., if you don't laugh, you'll cry).

It was just over a decade ago that the laughs arrived, and just in time. That's when Stewart's incarnation of The Daily Showhelped restore bits of progressive sanity, especially in 2002 and 2003, as America launched its misguided invasion of Iraq. At a time when so much of the Beltway press laid down for the Bush administration, Stewart pushed back. And he got big laughs. Yes, he was on basic cable, and no, he didn't have an especially large national following at the time. But this was obviously prior to the advent of Facebook, Twitter and the explosion of social media. Back then, Stewart, with Colbert later at his side, proved to be a pioneer.

This was a time when there were very few high-profile media voices that progressives could point to and say, "That's exactly how I feel about the war and about the mainstream media's utter capitulation to the Republican war culture."

Against all odds, late-night Comedy Central became that voice.

If you've forgotten how oppressive the Bush era was in terms Beltway media critiques, simply recall Colbert's star-making turn as the featured performer at the 2006 White House Correspondents Dinner. Holding court just a few feet away from Bush and before a sea of assembled journalists, Colbert skewered both targets with gleeful abandon; the satire layered on thick.

"Over the last five years, you people were so good -- over tax cuts, WMD intelligence, the effect of global warming. We Americans didn't want to know, and you had the courtesy not to try to find out," chided Colbert.

Then he lowered the boom:

Here's how it works: The president makes decisions. He's the decider. The press secretary announces those decisions, and you people of the press type those decisions down. Make, announce, type. Just put 'em through a spell check and go home. Get to know your family again. Make love to your wife. Write that novel you got kicking around in your head. You know, the one about the intrepid Washington reporter with the courage to stand up to the administration. You know -- fiction!

The media response to the epic truth-telling? First they mostly ignored him. Then they said he just wasn't funny.

According to Dana Milbank, Colbert "wasn't terribly funny." AndPostcolumnist Richard Cohen was utterly aghast at how "rude" Colbert had been to Bush. It was the comedian's rudeness that utterly rendered his act "not funny" and why he "failed dismally."

For the record, Cohen represented a prime example of a D.C. pundit who not only bought Bush's bogus tale of WMD's in Iraq, but who actively pushed the fabrication in his column. But I'm sure that had nothing to do with Cohen's disdain for Colbert's biting performance, right?

Meanwhile, can you imagine a conservative comedian rattling the Beltway the way Colbert did at that dinner, and the way he's been doing it for nearly a decade? Neither can I. Comedy Central's satirical juggernaut must be driving conservatives to distraction, especially the ones worried about losing the larger pop culture war.

"The right's anger over being comically challenged is made worse by that fact that they so desperately want to be funny," comedian Dean Obeidallah wrote on Daily Beast this year, when humorless Fox News anchors spent days lamenting President Obama's very funny appearance on the Zach Galifianakis web series, Between Two Ferns. ("Tragic," "gross," "dreadful," "unbearable" was how the unsmiling pundits lambasted Obama's extended bit.)

I doubt we'll ever see a conservative comic, or one of any partisan stripes, deliver the kind of satirical brilliance and insights that Colbert has for the last decade.