The French actress on shooting "Two Days, One Night" and playing a character who is addicted to Xanax 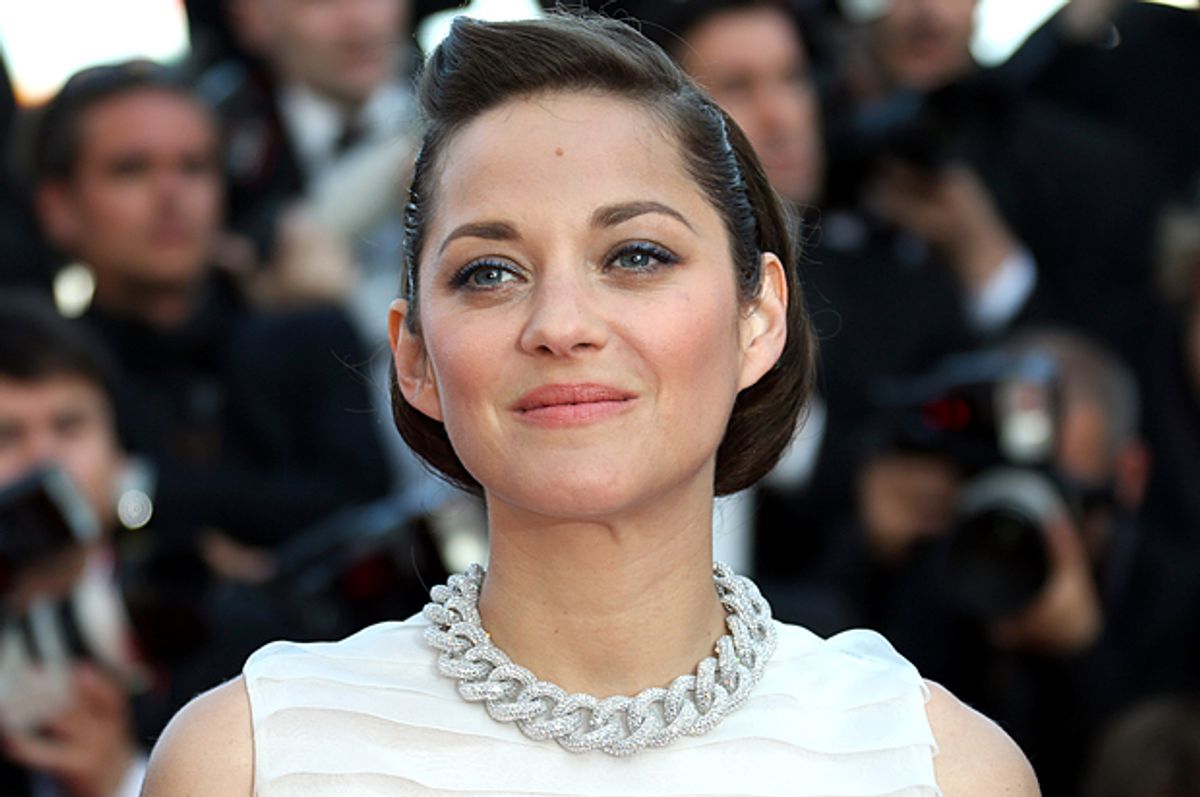 French actress Marion Cotillard rose to fame with her Oscar-winning turn as Edith Piaf in “La Vie En Rose.” She has since appeared in big budget Hollywood films such as Michael Mann’s “Public Enemies,” and Christopher Nolan’s “Inception” and “The Dark Knight Rises,” as well as indie fare including Woody Allen’s “Midnight in Paris” and James Gray’s “The Immigrant.”

And Cotillard gives another Oscar-worthy performance in her latest film, Jean-Pierre and Luc Dardenne's “Two Days, One Night.” The actress plays Sandra, a working-class woman facing unemployment who pops Xanax all too frequently. Sandra is overcoming a bout of depression and feels she needs the drug to steel herself; she must convince a majority of her co-workers to vote against collecting a bonus so she can keep her job.

Making the first request, over the phone, she contorts her body in a physical manifestation of pain and despair. The actress moves seamlessly from crying jags to—in one of her rare moments of happiness—singing. A scene where Sandra questions her supportive husband about their relationship shows the extremes of her insecurity and anxiety.

The Dardennes said after a screening of the film that they made you do up to 82 takes for some scenes. Is that true?

Sometimes even more! They wanted to shoot the scenes as sequence shots, which is a very special dynamic—especially since the shots last 10 minutes! You have to be perfect from zero to 10 minutes. If something wrong happens in minute nine, you have to start again. It was interesting to me to feel and create this character. I needed to create her life before, because we have information that she’s recovered from a strong and deep depression and she could go back down. I needed a lot of material to feed what you see on-screen, so I wrote extra scenes from her past, and how her depression affected her husband and kids. I wrote scenes that I could use to reach an emotion. But then after 30 takes, this material was not working anymore, so I was constantly creating things that I could use to feed these moments. She can burst into tears any moment. It’s hard to do. So I needed to find and use what’s inside of her.

I understand that you selected Sandra's wardrobe for the film …

I looked at the girls in the area …

So that’s not your personal style?

No, no way! [Laughs.] I do wear jeans. It was a realistic world. We needed to find something authentic to show how she dressed and behaved. We had a month of rehearsals before shooting, which was amazing—to experience different things and find the truth of the character. It was really organic. My relationship and connection with the Dardenne brothers was deep and strong. I shared their two brains for a few months. They offered me all I wanted on a film.

What impresses me in you performance is your body language. Can you talk about physically inhabiting Sandra?

That’s one of the most important parts to me in creating a character. I investigate the heart and soul of the person and when I get a sense of who she is, when I understand her, then I start the physical process: how you talk, walk, breath and think. It can be read in your body language. A confident and shy person will not talk the same way. The rhythm of breathing—it’s important to find the inside and the outside of the person. The month of rehearsal, I was able to explore deeply, it really comes organically. I won’t decide if she will walk slow or heavy. It makes sense to me when I discover her. The heavy walk comes, and I think it makes sense. When it’s hard to get out of bed, or hard to fight, it makes you feel heavy.

Low-budget “Two Days, One Night” vs. Hollywood films like “Inception”; France vs. America. For every “Dark Knight Rises” there is a “Rust and Bone.” How do you plan your career arc?

It’s always a new experience. There is as much difference between a Dardenne brothers film and “Rust and Bone” by Audiard as there is between Michael Mann, Christopher Nolan or Woody Allen. It’s not a matter of country or money. The issue of no money is the time you have to shoot your movie. But we had a month of rehearsal and 11 weeks to shoot “Two Days, One Night,” and we had eight weeks to shoot “Macbeth” [forthcoming]. It’s the energy the director gives that makes it go where we want. The Dardenne brothers’ film was not low-budget like “The Immigrant.” Director James Gray’s film created frustrations because we didn’t have the money or time to do it. That didn’t happen with the Dardenne brothers. They organize things to have the comfort to create. We don’t have to rush because we don’t have the time. This comfort is priceless.

Sandra suffers from depression and has relationship and job insecurity. How did you find a way into her character? She is sympathetic but not always. Sandra pops boxes of Xanax to calm her nerves. What do you do to relax?

[Laughs.] To relax, I breathe. I needed to know what was the effect of the Xanax. I’m too scared to take that medicine. I never went through depression. I came close. I’m a fighter, but I never let myself go down. I experienced what it means to question your place in society and to feel useless. That’s what she’s facing, and what our society has created. Indian tribes in South America—they don’t question their place in society. Our society has created this despair in people—how useful/useless they are. When you don’t feel useful, you can go to depression, or even suicide.

One of the film's most engaging moments has the characters singing in a car. I read you would have been a singer if you hadn't been an actress. Can you discuss that and tell me what you like to sing?

I said that a long time ago. I do love to sing, but I’m not sure I’d be a singer. Music is a huge part of my life and work. I work with music a lot. The music drives deep and direct emotions. I love to sing. I love Janis Joplin, but I would never sing Janis to anyone because who could be better than her? And Elvis Presley! I sing for myself, or my son—because he’s not judging me.

I won't judge either if you want to sing right now--