The year in viral: From "Too Many Cooks" to the "Oh hi becky" tweet

These are the videos, hashtags and memes that made waves on the web in 2014 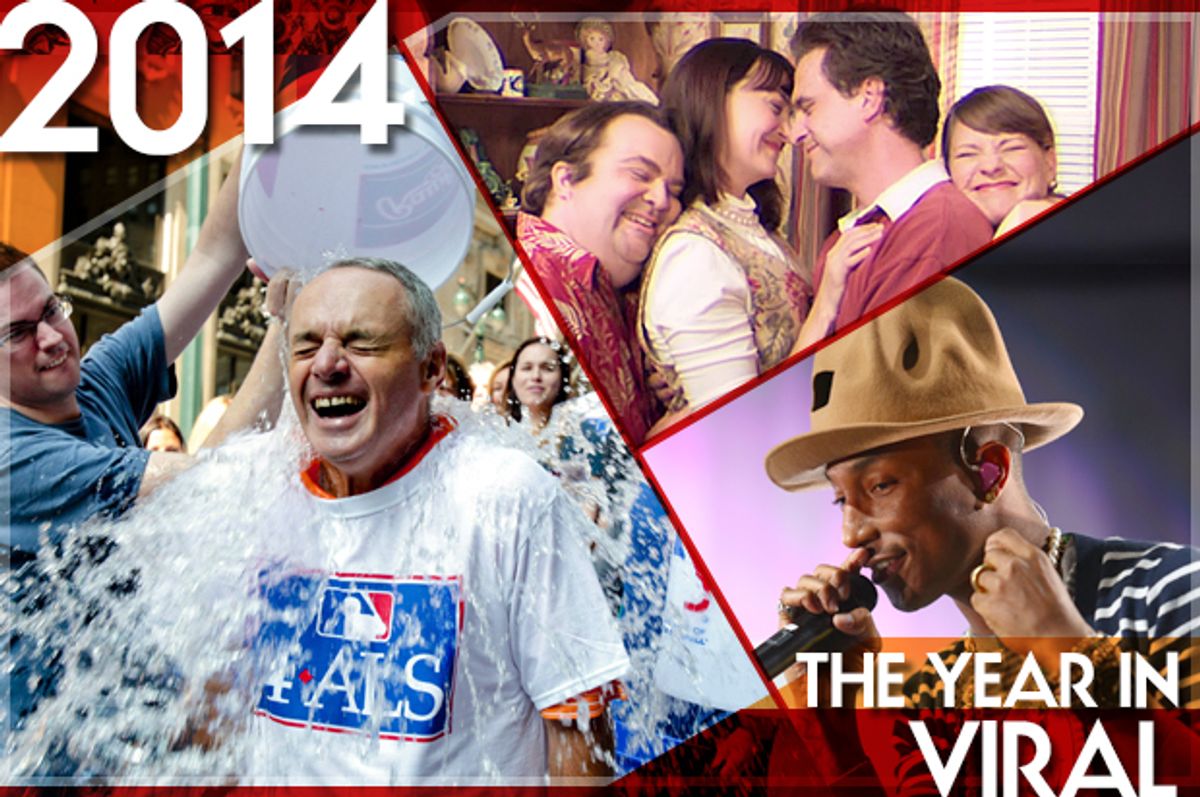 The internet has an extremely short attention span. It seems like every hour brings with it some new hashtag or meme, viral video or bizarre piece of internet ephemera that people just can't stop clicking on. In honor of the end of a long, exhausting year spent online, we look back at twelve months of things going viral, picking our favorite from each:

Pharrell’s ridiculously outsize hat from the Grammy’s was such a hit that it got its own twitter account, became a meme, and even ended up in a museum. A big year for Pharrell, sure, but an even bigger year for Pharrell's headgear.

Fans of the popular miniseries turned this hashtag into a viral sensation in February, using the hashtag to share increasingly ridiculous and outlandish suggestions of possible duos for the upcoming second season. (It ended up being Colin Farrell and Vince Vaughn, which is way less exciting than any of these alternatives).

March: Obama on Between Two Ferns

In March, the President went on Zach Galifiniakis’ fake Funny Or Die talkshow “Between Two Ferns” to plug the Affordable Care Act. Bill O’Reilly thought that it besmirched the Office of the President, saying “All I can tell you is Abe Lincoln wouldn’t have done it," but we thought it was pretty funny, and it got 8 and a half million youtube views to boot (and probably at least a handful of Obamacare signups).

Jimmy Fallon’s Tonight Show is a wealth of viral segments, some good, some bad, but the peak was definitely Emma Stone’s incredible lip-sync battle, which got over 38-million views and cemented her status — okay, tied with J-Law -- as America’s talk-show sweetheart.

In May, a guy named Chris Scott tweeted a joke to his approximately 1,000 followers, that went like so: "Oh hi Becky who refused to kiss me during spin the bottle in 6th grade & now wants to play FarmVille, looks like tables have fucking turned.” Pretty funny, but not funny enough to explain how the tweet went so  insanely viral, not just garnering over 27,000 RTs on the original tweet but being plagiarized in various forms on Tumblr and Facebook. (Read about the whole saga here)

A mugshot of Jeremy Meeks — aka, "hot mugshot guy" — went viral after the Stockton Police Department uploaded the photo to their Facebook in June. Meeks had been arrested on felony weapons charges, but since gaining over 10,000 likes on the photo, he now also has a modeling contract. Such is the power of the internet.

We are truly in the age of crowd-funding, and the phenomenon hit its self-parodying zenith in July, when Zack Brown posted a joking request for $10 to make a potato salad on Kickstarter. The internet got in on the joke, and he ended up making over 55,492, which he used to throw a potato salad party.

If you were on the internet at all this year you’ll likely be familiar with the Ice Bucket challenge, the ALS awareness campaign that everyone from Oprah to George W. Bush took part in. We're still waiting for Beyonce to accept her nomination.

Swift has been extremely viral this year, but perhaps our favorite T-Swift-meets-the-internet moment was when she was spotted wearing a “No, It’s Becky” shirt this september. For the uninitiate, “No It’s Becky,” was a big T-Swift tumblr meme, and Swift's canny referencing of it is just another example of why she is winning the internet this year.

October: "Too Many Cooks"

Adult Swim’s head-trip of a video parodying corny ‘80s sitcom intros was all anybody could talk about on the internet for days.

There is perhaps no better example of the mysteries of virality than Alex from Target: In November, a girl shopping at a Target in Texas tweeted a photo of her handsome checkout guy, Alex. Then it got retweeted… a lot. By that evening, Alex from Target had 300,000 Twitter followers (he now has nearly 800,000) and the next morning he fending off interview requests from every news outlet in the country, a full-fledged overnight sensation. And all because he's a cute guy who works at Target! Teen twitter is a glorious, terrifying thing.

Serial was a bonafide cultural obsession in itself, but perhaps the most insular, internet-y part of the whole obsession was 'Mail Kimp’ (for non-listeners, this comes from a kid incorrectly pronouncing the name of the sponsor, ‘Mail Chimp,’ at the start of each episode) which online fans glommed on to, turning into a hashtag, referencing in parody videos, and even giving its own remix. Long live Mail Kimp!

Pharrell's Hat Too Many Cooks Video