The network sinks to yet another new low 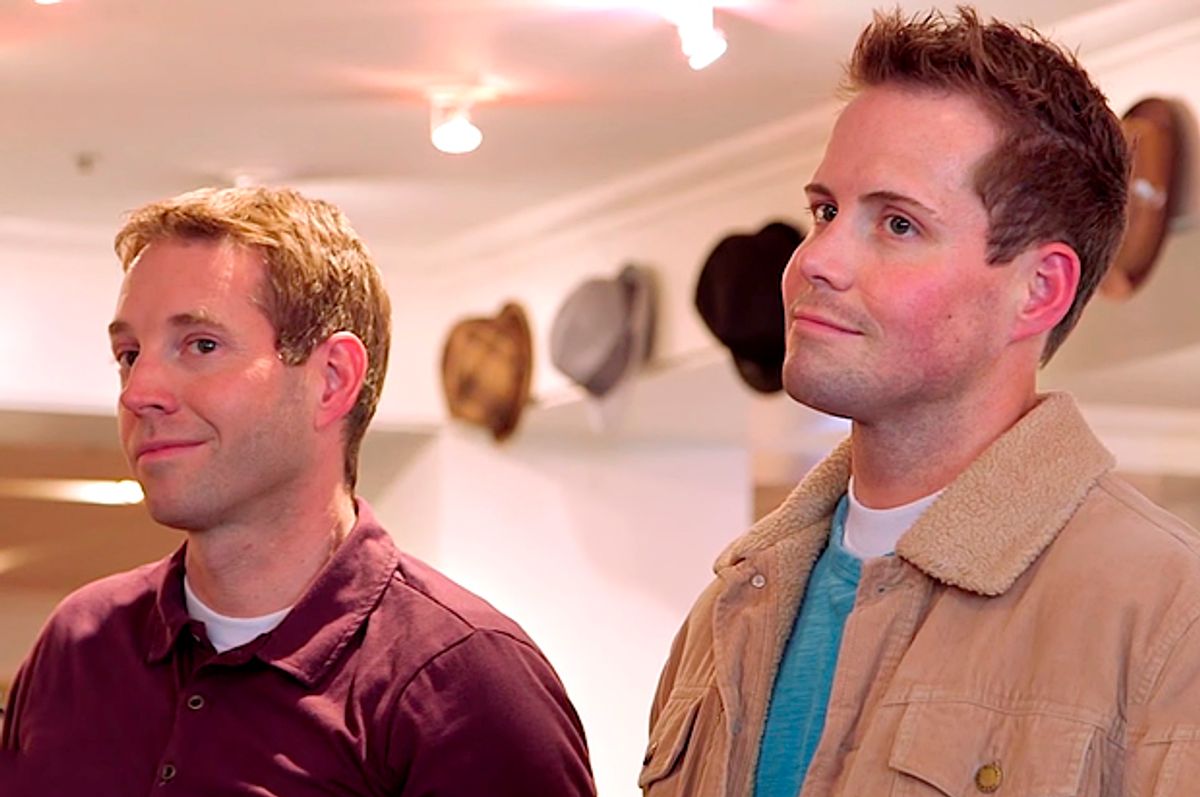 Of all the good things to come back this year – Weird Al! Reese Witherspoon! -- who'd have thought among them would be a much less welcome one: The old, awful "You don't have to be gay" concept?

Earlier this month,Richmond, Virginia got a big billboard from a group calling itself "Parents and Friends of Ex-Gays and Gays" proclaiming that "Nobody is born gay." Now, bottom-feeding vortex of sadness network TLC is serving up a reality special in January with the aspirational title, "My Husband's Not Gay." In the promo for the show, the "Not," of course, is cheekily dropped in between "Husband" and "Gay" as a winking afterthought.

The special goes to Utah to follow "a group of Mormons who live their lives a little differently" because – wah WAH –they're men attracted to men. And because their religion in unbudging that marriage equality is not going to happen for them and that homosexual activity is sinful, but that "If [gay men and women] do not act upon these inclinations, then they can go forward as do all other members of the Church," this leaves these Mormon men with a clear choice. A choice to meet and marry women exclusively.

The promo for the show features a clean-cut man and woman ice skating together, enthusing that they're "best friends," the woman enthusing, "I wouldn't change anything about him." There's another couple, featuring a man who says, "There's no marriage that's perfect. But with our faith in God we believe we can overcome anything." And there's a single man who says he's chosen "an alternative to an alternative lifestyle." The subject matter a natural choice for TLC in its ongoing exploration of outside the box relationships, and a likely audience grabber. Two years ago, Mormon marriage and family therapist Josh Weed went viral with a poignant and honest account of his life as a self-described homosexual man who happens to be married with three kids. In it, he admitted, "I am sexually attracted to men. I am not sexually attracted to women" but that he and his wife share a love not "distracted by the powerful chemicals of infatuation and obsession that usually bring a couple together." And, he explained, "If you are Mormon and you choose to live your religion, you are sacrificing the ability to have a romantic relationship with a same-sex partner." That's a sacrifice he and no doubt many other Mormons prefer not to make.

If you're looking for faint praise, I'll say that at least the TLC special doesn't appear to have sought out men actively trying to change their orientation. "Conversion therapy" is rapidly going the way of the icepick lobotomy, and Washington, DC signed a new law prohibiting the practice on minors just earlier this week. So it's for the best that the special focuses on men who openly acknowledge their attraction to other men, and are exploring how to reconcile that with their religious directives -- without forcing themselves to deny their feelings. And if two adults are content to have a relationship that's honest and does not include mutual sexual desire, and that works for them, who am I to disagree with it? I'm sure there are plenty of loving, comfortable arrangements in the world that are fulfilling in different ways.

But where I return to my eyerolling sense of disgust is in the way that TLC merrily serves up these men and their wives and girlfriends for judgment and jokes like they're on a super weird episode of "The Bachelor," throwing in some musical woot woot cues while the guys cast lingering glances at shirtless basketball players. Oh, it's all good fun, when you're devoutly devoted to an institution that tells you that if you act on the feelings in your heart you're sinful and hurting God!

It's not entertainment when a man says, "I want to marry a woman, but I don’t know how to work out these feelings." It's kind of heartbreaking. We need to be able to have conversations about the choices people make for their faiths, so we can approach them with love and compassion. But the way to do it isn't by trotting them out for a freak show. And a network that, amazingly, was once called The Learning Channel appears to be yet again content to offer very real and painful human struggles as a cheap, exploitive diversion.