Terrifying gifts from the 22nd century: The hottest holiday presents for a post-apocalyptic tomorrow

The world will be way scarier by then, but there are still plenty of fun options for Christmas 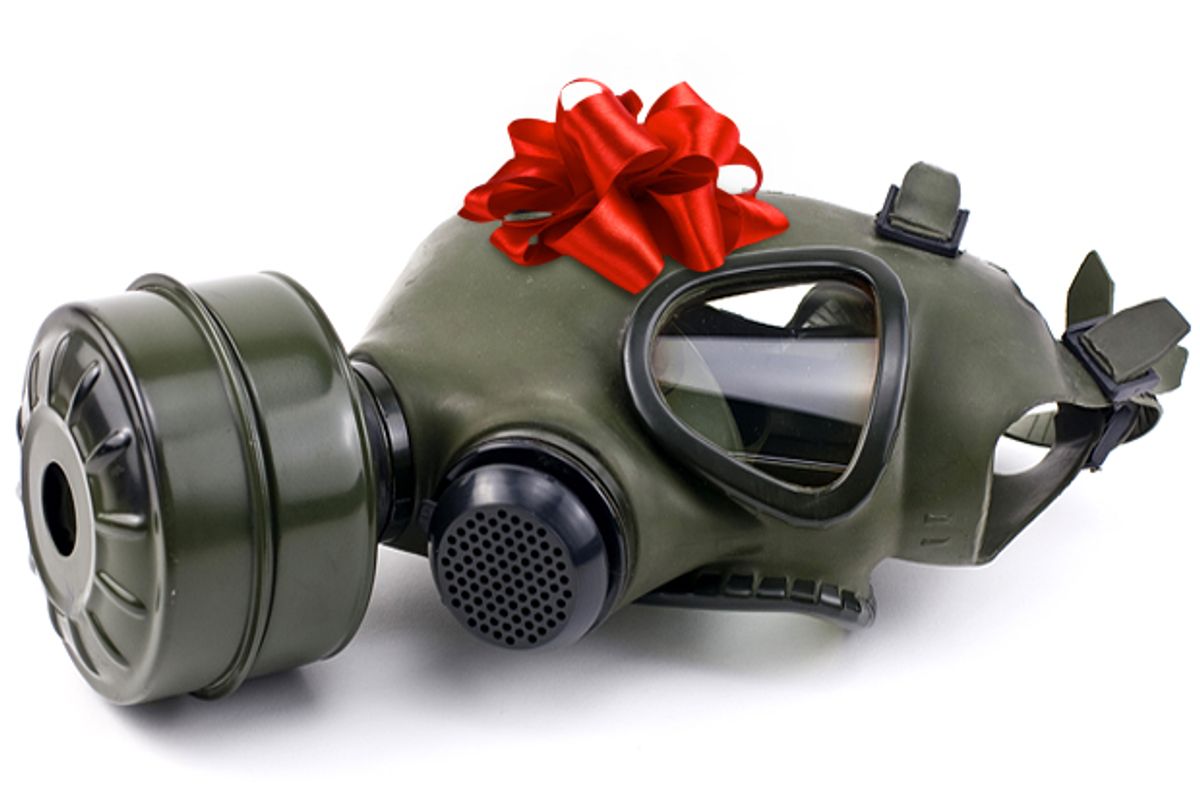 It's December in the year 2100, and you know what that means: Salon's annual holiday gift guide is back! This list has everything you need for a world ravaged by the unmitigated effects of climate change and environmental degradation; things to keep you disease-free, dry and distracted from a dystopian hell of our own making. Happy holidays!

Kraft-McDonald's Corp. Signature Flavor Droppers: Sure, we don't eat natural food anymore (ever since the population ballooned to 11 billion in the Great Birthing of the early '80s — the 2080s, that is — agriculture isn't much more than a historic curiosity), but that doesn't mean your Soylent can't taste like a bacon cheeseburger! These droppers come in packs of five, available in three different flavor families: Meat, Vegetable and Ethnic. 12 bitcoin.

Google Gas Masque: The latest trend in wearable tech is a must-have this holiday season. (All the better to avoid toxic particulates on your way to the bodega.) Available in a variety of colors including rust and nuclear sludge. 299 bitcoin.

Apple Ambient Noise Machine 103S: When the Euro-Asiatic Union quarantined all remaining non-insect species to the mega-reserves (one in each climate), the absence of the sound of chirping birds and other animal life proved to be unsettling. Apple began developing various ambient sound machines, using citizen-gathered audio files from before the E-A's mandate. Our favorite playlist is "Temperate Forest," but "Amazonian* Adventure" is also exciting if you're in the mood of a lot of monkey screeching. 119 bitcoin.

Lil Buddy Mosquito Netting: This is a great one for the kids! Children are especially vulnerable to Chagas disease, Malaria, Dengue fever and other mosquito-borne illnesses, so this is a must-have for them. Luckily, you don't need to make a boring safari-grade mosquito netting the centerpiece of a kid's room. This one has all your kid's favorite cartoon characters on it, so they can go to sleep distracted from the reality that death is everywhere. 49 bitcoin.

Novelty Lightning Rod: Nowadays, someone gets hit by lightning every half-hour due to the increase in atmospheric instability over the past few decades. Do your part to prevent unnecessary zaps with one of these novelty lightning rods, adorned with the heads of famous Republicans from history. Our personal favorite is President Rand Paul. 39 bitcoin.

Prada Ultralight Waders: Because you still need to look good, even if your town is flooded 11 months of the year. Available in faux-alligator, faux-snakeskin, faux-leather. 199 bitcoin.

Polar bear plush toy: Perfect for children and history buffs, this stuffed toy is shaped in the image of the polar bear, a carnivorous bear that used to live within the Arctic Circle, most famous as the spokesbear for Coca-Cola. (The pharmaceutical company actually used to be a beverage distributor... can you believe it?) 12 bitcoin.

*The Amazon was, at one time, Earth's largest rain forest and a trove of biodiversity. It was completely razed in the mid '60s.