This Christmas, homeless data is changing in shocking ways: Fewer people on streets, but a record for homeless kids 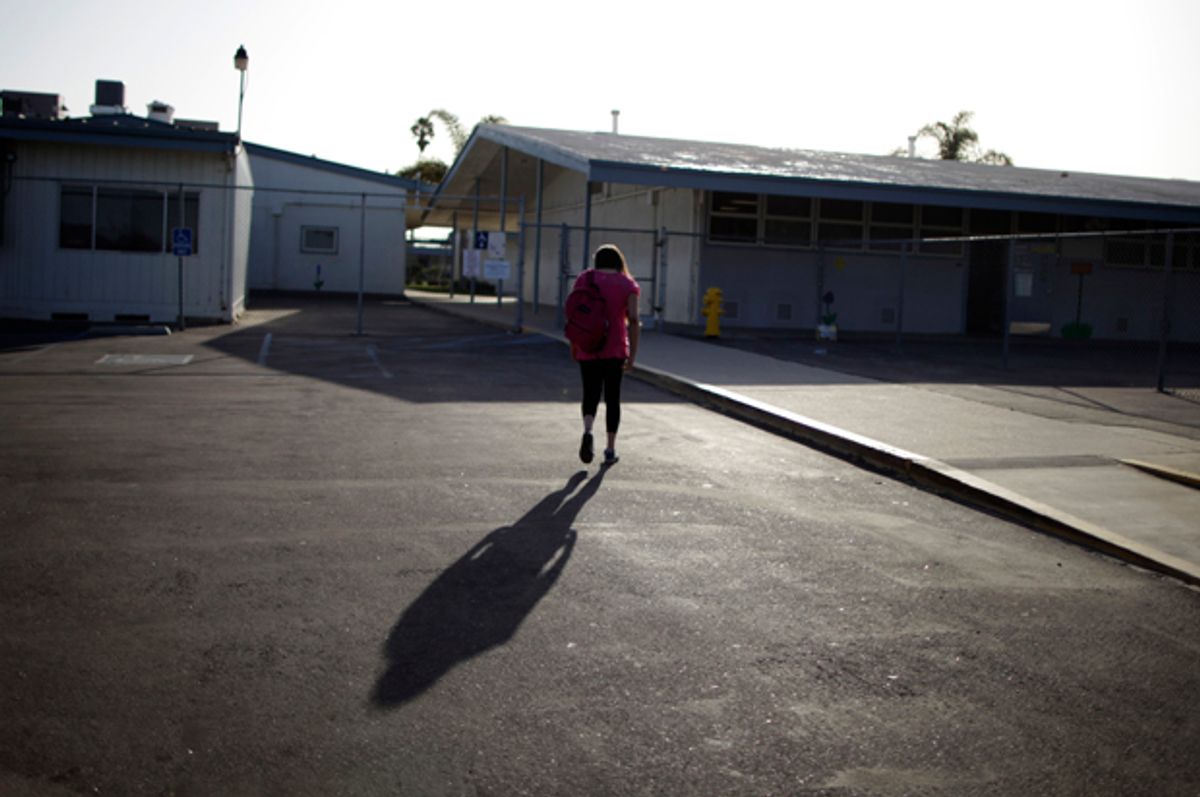 'Tis the season of joyful children, the unfortunate addition of candy canes to coffee drinks, and fancy DVD sets given by people who apparently aren't aware of streaming video. And also, pleas to help the homeless.

The way that last part repeats, year after year, can make it seem like homelessness is an entrenched, unchanging part of our society. But data from recent years shows the nature of the problem is shifting dramatically before our eyes.

According to HUD, the number of people on the streets and in shelters on a single night in January has fallen for the past four years straight. Even more remarkably, the category that HUD terms chronic homelessness — people with mental or physical disabilities living without a home for extended periods, or repeatedly — has dropped 30 percent since 2007, even as the nation went through a severe recession.

But there's also another story about homelessness in America, told by a report from the National Center for Family Homelessness, that shows a record number of children are now homeless. That's based on data from the Department of Education, which measures homelessness quite differently from HUD. Instead of just surveying streets and shelters, the DOE includes anyone who's living doubled-up, couch-surfing with friends or extended family. Because of that, the scale of the problem depends on which source you're looking at — almost 1.3 million homeless students by the DOE's count, compared with HUD's point-in-time estimate of 578,424 homeless people of all ages.

Still, the way the two sets of numbers are trending reflects something kind of mind-boggling: As a nation, we may be on our way to solving the problem of homelessness for the toughest people to serve. Yet, at the same time, homelessness is on the rise among a separate group of people, with problems that seem, on the surface, much simpler.

That veteran who used to sleep under a bridge? There's a good chance he now has his own place, with access to health care and counseling. But meanwhile, a mom with a couple of kids down the street has moved in with her sister's family, and one more fight over shared bedrooms could send them looking for somewhere else to stay.

The improvement in chronic homelessness is thanks largely to the adoption of "housing first" approaches that give people a place to live and then offer help with substance abuse and disabilities. Research has found this works much better than trying to offer services to people on the street before finding them housing. Over the past decade, groups working with the homeless have responded to the data and shifted gears.

"We've gotten a lot better across the board, I think, with people with very special needs," said Nan Roman, president and CEO of the National Alliance to End Homelessness. "There's kind of a technology around that, permanent supportive housing. It turns out it's really cost effective."

Looking at recent victories, like the fact that both New York and New Orleans have cut veteran homelessness in half in just three years, Roman said she's cautiously optimistic that homelessness among people with the greatest needs could be entirely eliminated.

But she said addressing homelessness among families is a whole different matter. Homeless families, mainly women and their kids, don’t experience mental health and substance abuse problems at anywhere near the rates of homeless individuals, so they don’t really need the same types of supports. In fact, homeless families look almost exactly like other low-income families.

"What you're seeing is this massive pool of poor people who can't afford housing," Roman said. "Some percent every year will have a crisis and fall into homelessness…. This is not really about homelessness; this is about resolving housing crises for poor people. There's going to be more of it because we're just not dealing with the income-housing gap — people not having a living wage."

Even though homelessness driven by economic need seems like a simpler problem than the chronic sort, it could be much harder to solve. Only a certain number of people live with serious disabilities. But, as pay rates at the lowest rungs of the economy stagnate, there are an almost unlimited number who could end up evicted after a few more rent hikes.

This isn't to say that no progress has been made in fighting family homelessness. Nationwide, by HUD's count, the number of parents and kids living on the street is less than half what it was in 2007, and the number in shelters hasn't grown enough to account for this drop.

Mary Cunningham, a senior research associate at the Urban Institute's Metropolitan Housing and Communities Center, said it's not altogether clear where those families go when they leave the street. In some cases, they may be getting support from various agencies to help them stay in their own apartments.

But there's also a suggestive bit of data in the HUD numbers: While family homelessness has generally fallen, there are a few places it's risen steeply. In Washington, D.C., HUD reports that the number of homeless parents and children rose from 1,603 in 2007 to 3,795 this year. In New York City, it jumped from 29,015 to 41,633.

Rents in these cities are extraordinarily high, and rising fast, which may partly explain why they stand out. But Cunningham notes that there's another difference. Both D.C. and New York have an unusual law guaranteeing a shelter bed to anyone who needs it — at least in dangerously cold weather. That means families that might otherwise be doubled-up or living in some other makeshift situation are more likely to end up in a shelter and get counted as officially homeless.

Perhaps partly because of their right-to-shelter laws, Cunningham said, some shelters in the two cities have evolved to look kind of like very low-quality apartments.

"So in some ways the shelter has become de facto affordable housing for people who don't have other options," she said. "That isn't great because the quality isn't there."

But are these shelters worse than the alternative? That's not clear. Cunningham said that, in cities without the right to shelter, more doubling up may create other problems, including a stressful environment for everyone involved.

"Those are not healthy situations either," she said. "It makes it hard for kids to go to school, stay on track in class."

Sakina Thompson, senior policy advisor for D.C.'s Department of Human Services, said the city has recently moved toward combining programs for families that are officially homeless and those that are simply poor, recognizing that they typically have the same needs.

"Families seeking homeless services look just like the families who don’t who also have low income," she said.

For example, Thompson said, city workers now assess the housing needs of every family that applies for the welfare program Temporary Assistance for Needy Families. It turns out that more than half of them are doubled-up and at risk of homelessness. Now the city can connect them with housing resources before they end up in a shelter.

The question is whether D.C., and other high-cost communities, can provide enough support to keep families in their own apartments.

The largest federal affordable housing program for low-income people is Section 8 subsidies, which pay a portion of a household's rent each month. But there are a limited number of the vouchers, and only a quarter of eligible families nationwide receive them. D.C. also has various affordable housing programs of its own, but Thompson said these resources are just not enough. The city's housing authority had to close its wait list for public housing a year and a half ago because it had gotten so long.

The mismatch between affordable housing and the people who need it is only getting worse. Nationwide, more than a quarter of renters pay 50 percent or more of their income in rent, and the percentage has risen substantially in recent years.

"That puts people at higher risk," said Cunningham. "If you're paying too much for housing, you're either making very difficult trade-offs about what else you're forgoing, like food or health care, or you're falling behind on your rent and you're putting yourself at risk for becoming homeless."

So if we want to help the homeless this Christmas, the best thing we can do might be to work for justice for all Americans living with those choices.