How to keep the peace with your conservative relatives this holiday: Complain together! 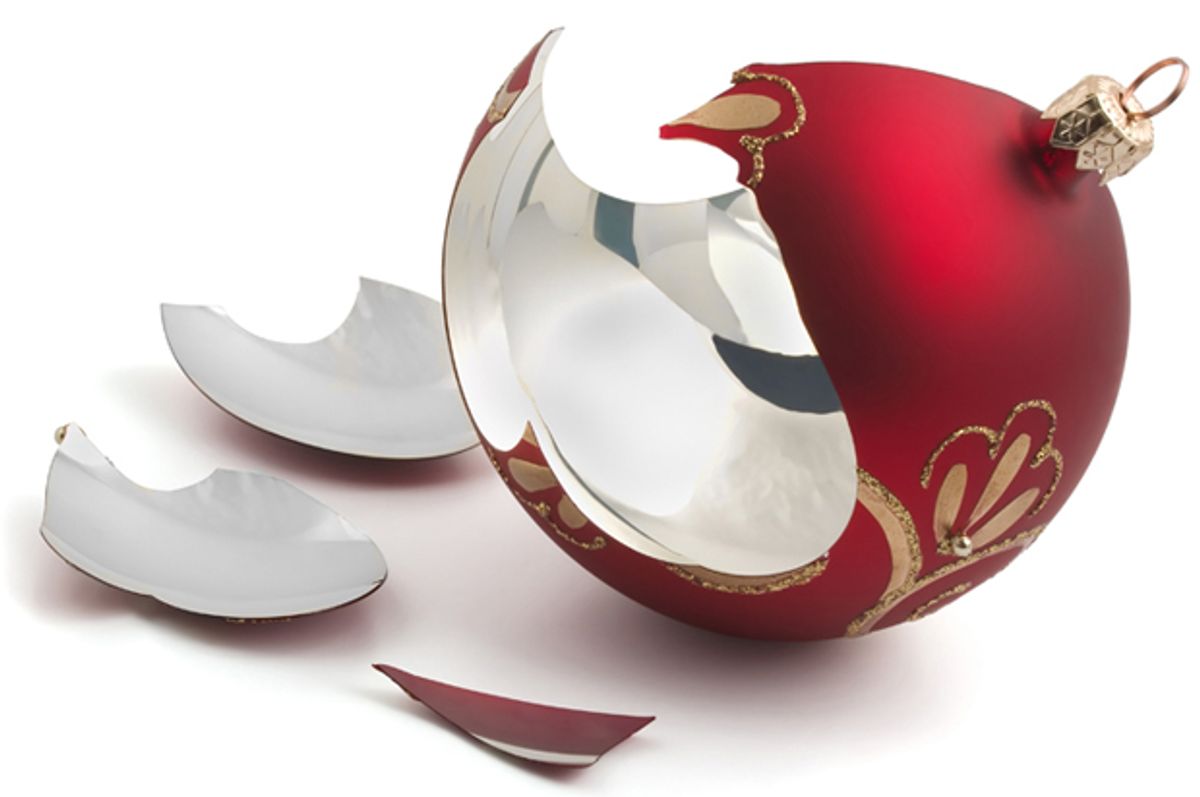 In the movie of my life, there will be a montage of all of the times I have outraged someone in my family (or been outraged by someone in my family) while talking about politics during the holidays. Like the time I had to chase after my mother’s friend as she fled to the elevator when our conversation about whether or not John McCain was “pro-choice” got, uh, heated. I convinced her to come back inside the apartment only after promising I’d drop the issue. (But for the record, John McCain does not support reproductive freedom. At all. Though maybe I shouldn’t have told my mom’s friend that she was “totally nuts” when she refused to accept my point about his record.)

Or that other time I found myself in an argument with a friend’s father, explaining that “partial-birth abortion” is not a medical procedure and that if he wanted to fight about reproductive health with me then he had to at least agree to use real words while doing so.

Now of course I’ve also had really respectful conversations with the people I love and disagree with about the things we think are important, but that’s not always possible. And if you want to avoid arguments altogether this year, which some of you might, I am happy to recommend a way to do just that.

Complain about mundane things! Indulge that feeling of injustice about something that actually does not matter at all! Everyone loves to complain! And others will support you in your complaints and then share their own complaints! It is the best, most unifying thing ever. In fact, if you do try to talk to your conservative relatives about politics and end up in an argument, try making amends by complaining together. It might help.

Here are four completely inane and self-indulgent things that I will complain about with my relatives this year. Feel free to borrow them if you need something ridiculous and inconsequential to complain about. (But let’s be real; you have plenty of such things to complain about. Everyone does.)

My bed might be too soft and I think it’s hurting my back.

I love a soft bed. I basically want my bed to be a sinkhole of comfort. In pursuit of this goal, I recently added another mattress topper to my already mattress-topped bed. This has really upped my comfort game while, say, watching Netflix on my laptop, but I think it’s also hurting my back. Every morning, I wake up with a tight, slightly crooked back.

What do you do in such a situation? Sacrifice the womb-like comfort of a warm, overly cushioned bed or, you know, take care of your actual body? Hard to say, hard to say.

Someone in my neighborhood has this dog that barks a lot, and another neighbor regularly yells out his window at the barking dog.

I don’t know who this person is or where they live, but they live close enough that I can hear their barking dog when they let it out in their backyard. It’s gotten better recently because the cold is ostensibly keeping the dog inside, but the pattern for months was basically this: I would wake up around 6 a.m. to the sound of a barking dog. The dog would be left outside for hours. Barking. Seemingly not unhappily or in distress. Just barking like a dog that barks a lot because that is dog language or whatever.

Then, after a few weeks of this, another person in the neighborhood shouted, “BRING YOUR FUCKING DOG INSIDE. WHAT’S THE MATTER WITH YOU? PEOPLE ARE SLEEPING.”

My initial response was to think that this man was a hero. It had worked. The dog was brought inside. He had said the thing we were all thinking! But then it kept happening. Day after day he would yell at the dog out the window. So rather than keeping the peace, he was now his own version of the barking dog. Only instead of barking in dog language, he was barking in English.

Eventually, I got earplugs. But isn’t that just awful that I should have to sacrifice so much? Don’t you feel bad for me?

Sometimes it’s so cold, and then all of a sudden it’s not very cold at all.

What’s up with this weather, ammiright? Some days, I am bundled within an inch of my life and still feeling that the wind has laser precision in finding the one part of my face/neck/hand/wrist that is exposed and chilling it to death, and the next day, having not checked the weather and wearing the same thing, I feel ridiculous and like everyone is judging me because it is suddenly 50 degrees outside.

This has been happening a lot in New York lately, and it’s making it hard to get dressed in the morning. And sometimes it gets so cold after dark and all of a sudden the coat you were wearing in the morning feels like a piece of disintegrating tissue in the face of cutting winds and rain that seemingly came out of nowhere.

Being inappropriately dressed for the weather is one of the things in life that I have the hardest time with. I basically turn into an infant. I have actually sworn off visiting San Francisco after one fateful day in 2010 in which I did not have enough clothing to stay warm, but also stubbornly resisted buying more clothing. But it was August. And it was easily 20 degrees warmer across the bridge in Oakland. What the hell, San Francisco?

My message to San Francisco, basically:

I think that competitive cooking shows are maybe too stressful for kids to compete on.

So why are kids doing this! They take things so seriously and they cry when they mess up! These sweet little kids are getting so sad because their spaghetti wasn't perfectly al dente or whatever. On one of the episodes I saw, a little kid got burned on the stove because he was racing against the clock! And then a medic came and he cried! He was so sad! It is stressing me out just writing about it! Kids should definitely cook but maybe not while being timed and with Guy Fieri kind of yelling at them about stuff. They have the rest of their lives to feel inadequate and surveilled by forces larger than themselves. I mean, why rush it?