Once upon a time, in a galaxy not so far away, CBS aired a holiday show about Chewie's family. Lucas still hates it 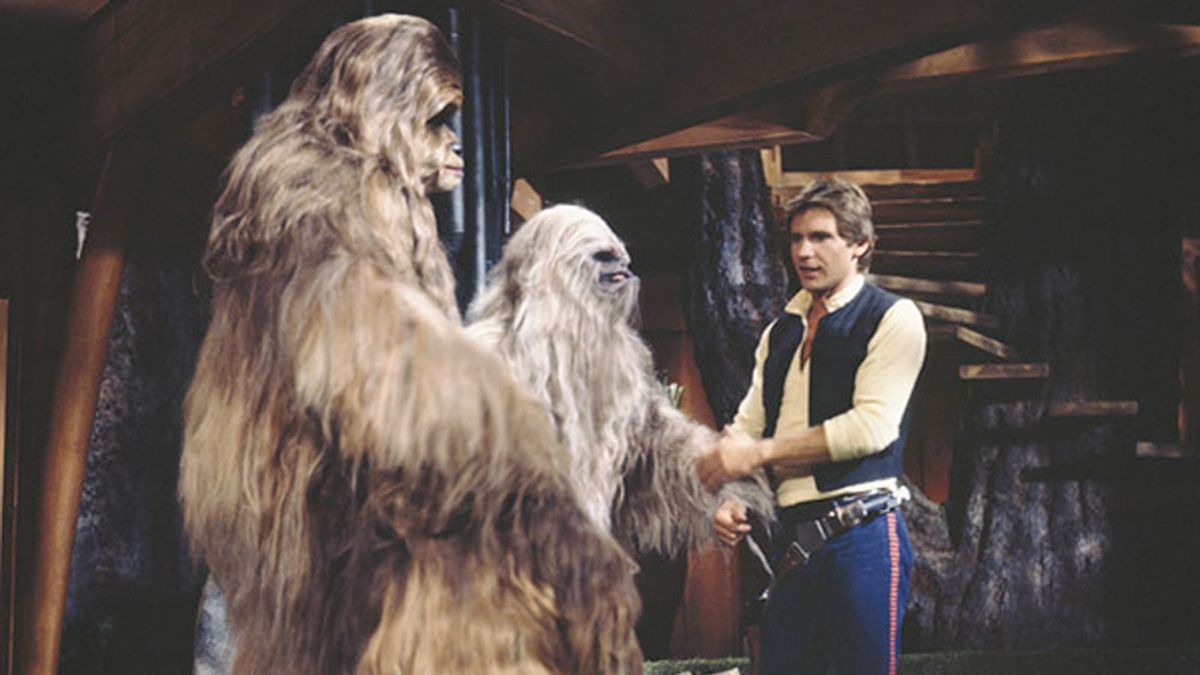 GEORGE LUCAS NEVER TALKS about the infamous Star Wars Holiday Special, except for this quote, obtained at a Star Wars convention: “If I had the time and a sledgehammer, I would track down every copy of that show and smash it.”

Harsh, telling words, never acted upon. Still, Lucas’ attempts to eradicate this blight on his legacy were significant. After its one CBS airing on Friday, November 17th, 1978, at 8 PM, he forbade future broadcasts of The Star Wars Holiday Special, and never allowed an official VHS or DVD release. Neither he nor the cast has ever discussed it at length.

THIS ISN’T THE SPECIAL YOU’RE LOOKING FOR… MOVE ALONG

Although Nielsen Media Research reported 13 million households watching, it’s hard to find someone who actually saw this most bizarre iteration of Star Wars in 1978. I was an original aficionado, but I missed it, and didn’t even know of it until fairly recently. So attempts to suppress The Star Wars Holiday Special appeared successful for awhile, no doubt to Lucas’ delight.

Not so fast. Turns out, the very fidelity Lucas wanted his story to engender would ultimately haunt him; a handful of superfans with VCRs taped that sole airing, and they furtively copied and distributed it. With the advent of the internet, those same superfans blossomed into content providers, uploading digitized versions of second, third, and fourth-generation VHS copies of The Star Wars Holiday Special to YouTube, where it finally hit my radar. (To his credit, Lucas leaves these superfans alone.)

After watching in varying stages of incredulity, I can say: I’m glad The Star Wars Holiday Special exists, and no, this is not sadistic schadenfreude. At 49, I’m less “may the force be with you” and more “there’s a crack in everything, that’s how the light gets in” (Leonard Cohen), and “beauty is anything you are compelled to look at” (John Waters). I don’t know how I missed it, but if I’d seen The Star Wars Holiday Special in 1978, when Star Wars was my de facto religion, I would’ve been crushed to discover my new god, George Lucas, had feet of clay. It would be like discovering Walt Disney was racist (oh, wait…). But these days, I find embracing flaws – or trying to – a healthy, even a necessary endeavor (unless one wants to be a sad, lonely, bastard perfectionist). And The Star Wars Holiday Special is a grand flaw. But how, oh how, did it happen?

In time, Padawan, in time.

Everybody gets at least one tailor-made cultural moment. My mom was a teenager when rock n’ roll hit in the mid-50s; my son was a toddler and pre-teen during the Golden Age of Pixar, i.e. the early ‘aughts. For both of them, these events perfectly fit their age. Even though I also love 50s rock n’ roll and early Pixar, they’re not mine, as I was born in 1965. Star Wars was mine. I was there.

I had just turned 12 in the summer of 1977, when Lucas’ medium budget space cowboy adventure – a potent retelling of the timeless, archetypal hero’s journey – hit the big screen and became the most successful movie in history. The buzz was intense in my hometown of Atlanta, so I rode my bike alone two miles to Loew’s Tara Cinema – one screen, huge, packed theater – and sat in the front row, shivering in my cutoffs as George Lucas’ vision spoke to my every molecule.

This was like no movie audience I’d ever been in. We were a mesmerized congregation, suffused with power, connected via… what?… the Force! Yes! Like Obi-Wan says: “The Force is what gives a Jedi his power. It’s an energy field created by all living things. It surrounds us and penetrates us. It binds the galaxy together.”

We were all Jedis for that 121 minutes, frequently erupting as one in rapturous applause, especially at the end. I emerged from that theater a different person, the film resonating in me like an endless echo, life terrain spread before me now much broader. After riding home in a dither, I fastened a belt around my midsection so my shirt looked like Luke Skywalker’s space-tunic, and ran around in the woods humming John Williams’ score in a state of ecstasy not to be equaled for some time.

While millions of kids like me were pledging fealty to Luke, Han Solo, Chewbacca, Leia, Obi-Wan, and the droids, and dressing up like Darth Vader for Halloween, George Lucas was hustling to get The Empire Strikes Back into production while also creating Raiders of the Lost Ark with Steven Spielberg. The guy was busy. But withEmpire two years off, he was, touchingly, still insecure about the lasting impact of his creation, and wanted to keep his newly minted franchise in front of people. What better way to do that than TV? The home video market was several years off (cost of a VCR in 1978: $1,000; cost of a home video: $100), and families watched a lot of TV the weekend before Thanksgiving. A special would offer folks a chance to re-engage with – or meet for the first time – those beloved characters from summer and autumn of ’77. And they’d be inspired to purchase Star Wars toys for Christmas! (Lucas got a cut of the toys. Still does.)

Lucas presented television producers with an idea for a yuletide special, which his fellow U.S.C. film school alumnus, David Acomba, would direct while Lucas was otherwise engaged. Everything would revolve around Chewbacca’s family.

(For the less Star Wars geeky among you, Chewbacca is Han Solo’s Wookiee sidekick, a non-English-speaking cross between a dog and an eight-foot-tall man, inspired byIndiana, George Lucas’ pet malamute.)

The special would introduce Chewbacca’s wife Malla, father Itchy, and son Lumpy, and the Wookiees’ home planet of Kashyyyk, where they live in an elaborate treehouse. The family anxiously awaits Chewbacca’s return from space adventures so they can all celebrate Life Day together. Life Day is a very important holiday. (Why? We know not.) Chewbacca is late, and his family deals with anxiety by talking to Leia and Luke via videophone and watching cartoons, holographic musical performances, and an intergalactic cooking show. Meanwhile, Chewbacca and Han Solo flee Darth Vader’s minions because Chewie must be home for Life Day. These are the stakes, or stake. And by the way, Chewbacca’s family speaks only the guttural, braying language of Wookiee, and, as in Star Wars, there are no subtitles. Clearly, Lucas was temporarily tapped out, but no one was telling him no. He presented the story outline, but didn’t have time to actually write the thing, so he engaged producers to hire seasoned TV writers. And while Harrison Ford, Carrie Fisher, and Mark Hamill were enjoying their increasing fame, they were not yet in a position to refuse to be involved. Fisher, in fact, saw the special as an opportunity to show the world she could sing. That’s right: at the behest of the hired writers, most of them veterans of the variety show world, the show was to have musical numbers.

VARIETY SHOW IS THE WAY TO GO

For most of the 70s, variety shows had flourished alongside perennials like sitcoms and game shows, and I came of age enjoying them, usually with my grandparents:Sonny & Cher, Donny & Marie, Shields & Yarnell, The Hudson Brothers, Flip Wilson, and the undisputed apotheosis of the genre, the Carol Burnett Show. But in 1978, TV was going through a sea change. “Escapist” programs like Fantasy Island, Charlie’s Angels, and The Incredible Hulk were ascendant, and would soon rule. Still, despite the recent cancellations of the Carol Burnett Show and Sonny & Cher, the producers insisted: “variety show is the way to go.” No one thought the format was finished; they just thought it needed spicing up, a la aliens and space adventurers. “You don’t know from TV,” they said to Lucas. “We know TV!”

Over the smell of cigarettes and martinis, one hears: “And why not bring in variety show vets and sitcom pros to make this science fiction space thing really fly? You know, like Harvey Korman, Bea Arthur, and Art Carney? And for musical talent, let’s get those young hitmakers Jefferson Starship, and that classy Vegas sure thing Diahann Carroll!”

Lucas wouldn’t see it all until it aired.

Today, producers and writers involved in The Star Wars Holiday Special say they knew something was amiss from the start, but the likelihood, I maintain, is that they didn’t, at least not as much as they say. It was a seismic time when no one knew what was happening, even people who were paid top dollar to foresee what would and wouldn’t work in the realms of entertainment. Star Wars, in fact, was initially seen as a long shot. The only George Lucas peer who thought it would be a global hit was Steven Spielberg. The rest thought Lucas was crazy and doomed.

Regarding The Star Wars Holiday Special, perhaps he was a little crazy. In any case, he learned from the experience, and wouldn’t cede control of his franchise again until 2012, when Disney purchased it for $4 billion. Yet he’s still involved; he’s written the stories for the next three installments of the saga – the first, The Force Awakens, due next December – and he’s handpicked his successors, relying largely on confederates acquired over the last thirty-five years. (I would be lying if I didn’t say this all makes me feel 12 again, especially when I watch the recently released trailer for The Force Awakens. Chill bumps every time.) But Disney, perhaps leery over the lame George Lucas-helmed Phantom Menace and Attack of the Clones – more difficult to watch than the Holiday Special, it must be said – has final cut. How this sits with Lucas is unclear. He says that, unlike 48 million people, he’s not watched The Force Awakens trailer on YouTube. (He hates the internet.)

Perhaps one day George Lucas will talk at length about The Star Wars Holiday Special. In the meantime, it’s certainly worth a look. (First section below. The rest are easy to find.) Regardless of what it’s “about,” it presents a god allowing his creation to leave his side and become fallible, to sink to the level of flawed humans. That creation suffers, is buried, and rises again. Now that’s a good story.