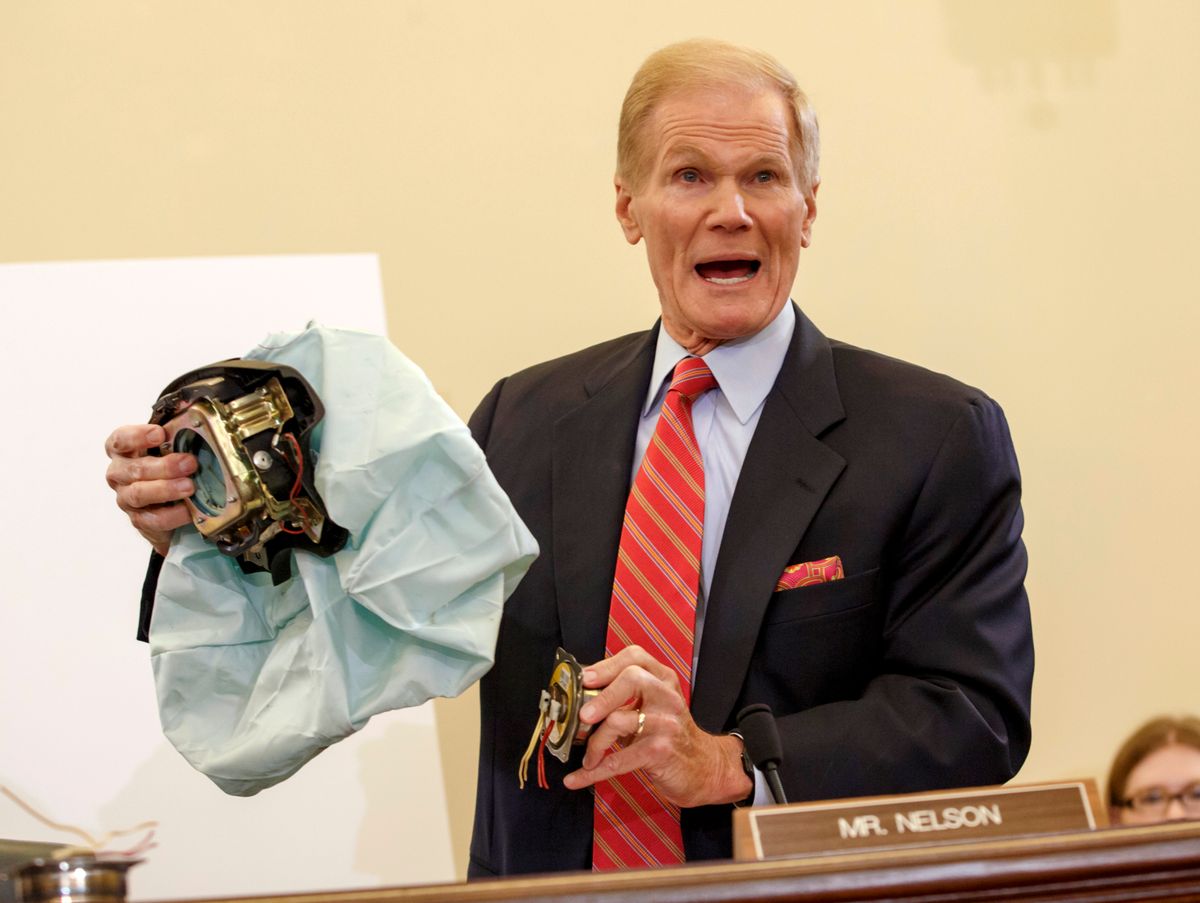 FILE - In this Nov. 20, 2014 file photo, U.S. Senate Commerce Committee member Sen. Bill Nelson, D-Fla. displays the parts and function of a defective airbag made by Takata of Japan that has been linked to multiple deaths and injuries in cars driven in the U.S., during the committee's hearing on Capitol Hill in Washington. Automakers issued more than 700 recalls in the U.S. alone this year, covering 55 million cars and trucks. (AP Photo/J. Scott Applewhite, File) (AP)
--

NEW YORK (AP) — This year showed how sheltered the U.S. economy is from geopolitical and health crises around the world. The global economy sputtered, but the U.S. powered ahead. Employers are finally hiring enough to lower unemployment. A plunge in gas prices and a rising stock market has Americans feeling richer and spending a bit more.

Those are some of the top business stories of 2014, as chosen by business editors at The Associated Press. Others include massive product disasters: A string of auto recalls after faulty ignition switches from General Motors Corp. and air bags in many car models caused injuries and deaths. Hackers stole personal information from millions of people in a wave of breaches at stores, banks, a movie studio and other organizations.

We're also becoming increasingly dependent on our phones and tablets, using them to communicate, play and pay.

Janet Yellen became the first woman to head the Federal Reserve and U.S. workers won higher pay as cities and states across the country raise the minimum hourly wage.

Corporate deal-making was also in the spotlight. Companies acquired each other at a level not seen since 2007, the year the Great Recession began, while a burst of businesses went public.

1. U.S. GROWS AS WORLD SLOWS: After a freezing winter put a chill on buying and selling, the U.S. economy has posted its best six months since 2003. But the rest of the world hasn't been as lucky. Japan has fallen back into recession. The 18 countries that make up the eurozone are barely growing and fear a dangerous drop in prices. Major developing nations aren't faring much better. China's growth has dropped to a five-year low of 7.3 percent. Western sanctions and dropping oil prices have decimated Russia's currency. Brazil just edged out of recession. What's helped the U.S. is its relative insulation. American consumers, not exports, are the main drivers of the world's largest economy.

2. JOBS ARE BACK: Millions of Americans still struggle with low pay and fewer hours of work than they want, and millions have given up looking for a job entirely. But five years after the recession ended, the U.S. job market is looking healthy. The unemployment rate is below 6 percent. Employers added nearly 3 million jobs, the most since 1999, as shoppers and businesses spend more. As a result, the Federal Reserve ended its recession-era stimulus program in October and is edging closer to lifting interest rates. The Fed has kept rates near zero since 2008 to spur lending and investment.

4. OIL PLUNGE: Global crude prices have fallen to around $56 per barrel from this year's high of $115 because of more production, especially in the U.S., while slowing economies in Europe and Asia crimp demand. A rapid decline in the second half of the year pushed gasoline to about $2.30 a gallon in the U.S., the lowest price in nearly five years. Americans are pocketing $15.4 billion more a month than when gas was at its 2014 high of $3.70. Cheaper crude is also pumping up auto sales and saving airlines money on jet fuel. But drilling could slow in North Dakota's new boomtowns and other regions, hurting businesses that have cropped up. And governments in energy producers Russia, Venezuela and Iran are being squeezed, increasing the likelihood of political upheaval.

5. AUTO RECALLS: In the U.S. alone, automakers recalled more than 60 million cars and trucks. That far surpasses the previous record of 30.8 million in 2004. The bulk of those come from two problems that have led to nearly 50 deaths and dozens of injuries. Japanese air bag supplier Takata, whose air bags can inflate too fast and spew shrapnel, has fought regulators' demands to expand recalls. And GM was fined the maximum $35 million by U.S. safety regulators for dragging its feet — for a decade — over replacing faulty switches that can shut down car engines. The U.S. Justice Department is investigating both companies.

6. MOBILE MOMENTUM: PC sales are slumping, but mobile phone subscriptions are expected to reach 7 billion this year — the same as the world's population. Phone makers are launching cheaper smartphones aimed at developing countries, which could get billions more people online. Already, more than a billion people check Facebook on their phones and tablets. The social media giant spent $22 billion on a phone messaging app, WhatsApp. Uber, a hail-a-cab app, is valued at $40 billion. Apple Inc., the iPhone and iPad maker, launched a payment system that sidesteps cash and plastic.

7. STOCK MARKETS SOAR: Another year, another record. The end of the Federal Reserve's bond-buying stimulus program stressed investors this fall, but U.S. stocks kept rising, extending the bull market run to nearly six years. More companies acquired each other and big companies bought up more than $400 billion of their own stock, helping to put the Standard & Poor's 500 index on pace for a 13 percent gain in 2014. And despite the end of the Fed's bond purchases, which was expected to weigh on markets, bond prices rallied and rates dropped.

8. MINIMUM WAGE GROWTH: Inequality has been rising, and median household incomes have fallen since the recession began in late 2007. But the federal minimum hourly wage has remained at $7.25 since 2009. Labor organizers, fast-food workers and Wal-Mart Stores Inc. employees have campaigned for higher pay across the country. Congress hasn't acted, but cities and states — and President Barack Obama — have. Obama raised pay by executive order for government contractors, to $10.10 an hour. By Jan. 1, 29 states and Washington, D.C. will have a higher minimum wage than $7.25. Seattle approved an increase to $15 an hour, the highest rate in the country.

9. JANET YELLEN: The Federal Reserve had been led exclusively by men for a century. Then Janet Yellen, a 68-year-old former economics professor and the No. 2 at the Fed, became the first woman to lead the central bank. Plainspoken, with a trace of her native Brooklyn in her speech, Yellen criticizes inequality, focuses on jobs growth and has tried to demystify the moves of the notoriously opaque Fed. She has also tied the failure of most economists to predict the damages wrought by the financial crisis to a lack of diversity in the field. She says that increasing diversity is a priority at the central bank.

10. LET'S MAKE A DEAL: Higher stocks and confidence lifted global mergers and acquisitions volume to highest level since 2007. With a few days to go, global deal volume has risen 20 percent to $3.41 trillion, including debt. Climbing markets make it easier to do stock deals, and borrowing is cheap. Meanwhile, initial public offerings had their biggest year since 2000. Health care companies made up 37 percent of all IPOs in the U.S., nearly double the level in 2013. And the biggest IPO ever, that of China's e-commerce behemoth Alibaba Group Holding Ltd., raised $25 billion in September.