More lethal than the Whopper: How Burger King pleases the 1 percent, screws its workers

It pays workers like me so poorly I need public assistance despite working full-time. Now it's dodging taxes 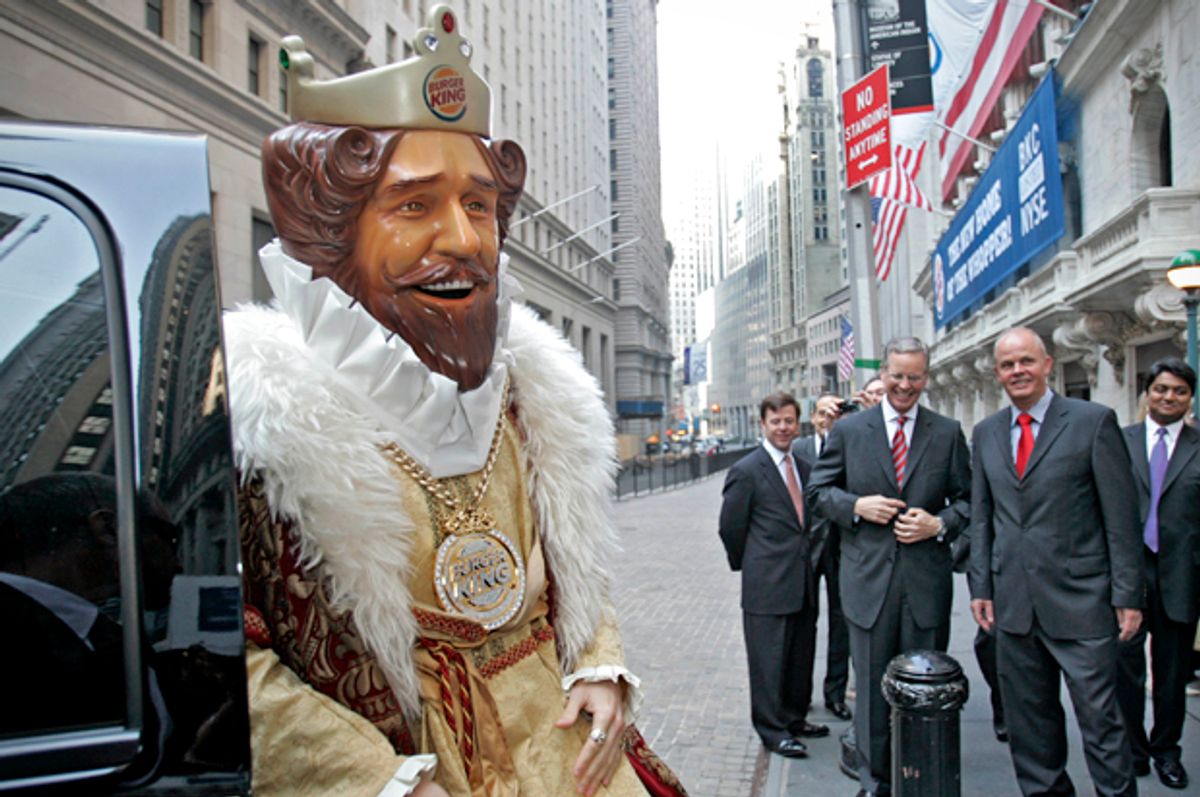 For the past year, I’ve worked at a Burger King in Tampa, Florida, making $9 an hour. Taxes are taken right out of my paycheck like they are for most people in America.

But Burger King doesn’t want to pay its fair share. Burger King wants to be seen as an All-American brand, and it is happy to benefit from taxpayer subsidies. But when it comes time to give back to the nation that has made them among the top fast-food chains in the world, Burger King is doing everything it can to get out of paying its fair share of taxes.

Let’s do some math real quick. I make $9 an hour. For simplicity’s sake, I’ll be generous and say I work 40 hours a week. (Hardly any fast-food workers are scheduled for a full 40-hour work week, which is why so many of us need to work a second or third job to get by.) That’s $360 a week—just under $19,000 a year before taxes. I need food stamps and Medicaid to support my two kids. I’m not the only one. Because pay is so low, a lot of Burger King workers have to rely on public benefits just to survive. All in all, it adds up to around $356 million that taxpayers pay each year to help feed Burger King workers because our pay is so low.

Have you ever heard of something so ridiculous? I feed people for a living. I work for an incredibly rich company. But I can’t afford to feed my family, so American taxpayers just like me are footing Burger King’s bill.

Not only is Burger King taking money from taxpayers, but now that it's Canadian, it's not even going to pay back into the system. It’s like the shareholders have taken a giant vacuum cleaner and are just sucking hundreds of millions of taxpayer dollars and depositing them straight into the bank accounts of a few billionaires. Doesn’t really seem fair.

What all this means is that Burger King will continue to market itself as an American brand when it comes to making money off U.S. consumers and taxpayers, but when tax time rolls around, the Burger King and its major owners will be singing "O Canada."

As for me, I have joined a movement of other fast-food workers who want companies like Burger King to be responsible to their employees and the people they serve. We want them to pay their workers $15 an hour and respect our right to form a union without retaliation. Better wages would lift a lot of Burger King’s workers out of poverty, and mean that we wouldn’t need to rely on food stamps to feed our families. And we want the company to pay its fair share of taxes like its employees already do.

Anthony Moore works at Burger King in Tampa, Florida, and is part of the nationwide Fight for $15.