"No civilization would tolerate what America has done" 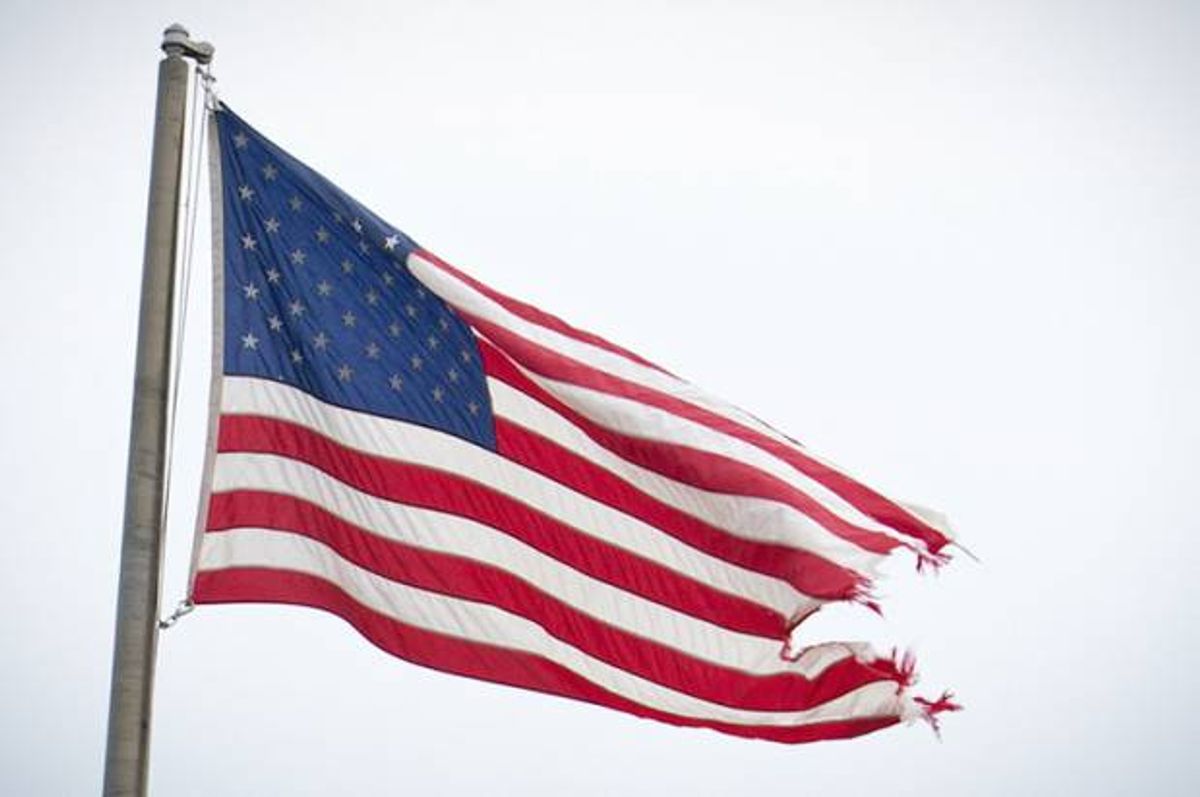 It seems police can get away with anything: choking men who have surrendered; shooting unarmed teens; knocking pregnant women to the ground. While the issues involving race, civil rights and the relationship between law enforcement and communities are essential for examination and correction, few are talking about how all of this fits into the larger pattern of America’s cultural decline and decay. America has become a society addicted to violence and indifferent to the suffering of people without power. Whenever there is a combination of a culture of violence and an ethic of heartlessness, fatal abuse of authority will escalate, and the legal system will fail to address it.

Critics are right to condemn the criminal justice system for its embedded inequities and injustices, but they are hesitant to condemn the actual jurors giving killer cops get-out-of-jail-free cards. These jurors are representational of America: ignorant and cold. They hear testimony from eyewitnesses claiming Darren Wilson shot Michael Brown while he had his hands in the air, and set Wilson free without trial. They listen to reports of three officers choking Robert Saylor, an unarmed man with Down syndrome who wanted to see a movie without a ticket, and they send the police back to work. They watch video footage of police choking Eric Garner in New York, and of two police officers brutally beating Keyarika Diggles, a woman in Texas, and they decline to make them pay for it.

Have they been programmed into cruelty and apathy by American schools, churches, families, politics, and pop culture?

There are practical demands that the sane minority of Americans can make as they march the streets of Ferguson, New York and Chicago. Body cameras on police officers is a technological aid to the people who live under military occupation from the blue army. Tougher requirements for entering the police force, and better training methods for those in the academy are essential, as is a sweeping and radical review, best led by the White House, of a racist and predatory criminal justice system.

Jesse Jackson has offered the excellent proposal that the Department of Justice begin investigating police departments to determine if they are following civil rights laws on hiring, employment issues and law enforcement policy. If they are not, as it appears with Ferguson, they should no longer receive any federal funding. Jackson’s idea to “fight civil rights violations with civil rights law" is a brilliant plan to punish police departments that obstruct justice, prevent further abuses by exerting financial pressure for compliance and strike a blow against the militarization of police. No more armored vehicles or special forces gear for police departments that do not hire minorities, or that systemically target Latinos and African Americans for arrest.

While this all seems unlikely to happen, let us pretend America magically transforms into a decent society and begins policing the police, moves toward fairness in criminal justice and actually prioritizes civil rights. There is still the cancer at the heart of a culture committed to venerating violence, celebrating selfishness and condemning compassion.

Noam Chomsky and Edward S. Herman wrote the classic Manufacturing Consent, about the manipulative and exploitative relationship corporate media has with the American public. What if the consent is not manufactured? What if, as historian Morris Berman contends, the plutocratic theft of American lives and treasure is not actually a robbery, but a transaction?

William of Ockham famously devised the problem-solving principle, Occam’s razor: Cut away the unnecessary complications and the simplest answer to a question is most likely the correct answer. After all the analysis of the normalized dysfunction of democracy in America, launched with the assumption that the political system fails to represent the will of the people, the question remains: what if it actually does represent the will of the people? That the system is actually succeeding in upholding its representational promise might be the simplest and most probable answer to the mystery of America’s comatose slumber in a nightmare of torment for the oppressed and treasures for the oppressors.

More optimistic liberals will identify the masses of protestors filling the streets with rage and disgust over the state-sanctioned murder of two unarmed black men, but the thousands of people protesting in major cities are only the sane minority. The sane minority fights against the “silent majority” of Richard Nixon’s delight. The disgraced president was right in 1969 when he pointed out that the majority of Americans were not part of anti-war demonstrations or countercultural movements; they were his voters, and their children became Reagan’s voters. From beyond the grave, he is still right.

The police officers who shoot teenagers for the crime of stealing cigarillos, the cops who choke men to death and beat women, along with the police administrators and county prosecutors who protect them, are not from Mars. They are not lizards in disguise, as some of the wildest conspiracy theorists suggest. They are Americans. They are products of American institutions and culture, and they staff and supervise the enforcement of our laws.

In all of the attacks on the “system” for endorsing the behavior of murderous cops, few critics actually condemn those most responsible for the decisions not to press charges: the jurors. No one reasonable can doubt that the county prosecutor, Robet McCulloch, in Ferguson, did his best to corrupt the process, but clearly no one marching in solidarity with Michael Brown’s family would have let Darren Wilson live comfortably with the $1 million his supporters raised to assist him through his financial difficulties. A large part of the problem lies with the jurors who accepted their roles as McCulloch’s toys and Wilson’s collective shield.

There is no imaginable defense of the jury in the Eric Garner case. They had visual evidence of the police murdering a man begging for his life. They, like the police they protect, are average Americans. They are not cyborgs. They are your neighbors.

Twelve more Americans in Texas felt no horror or sympathy when watching two police officers beat Keyarika Diggles in a police station. Perhaps they viewed it with the same amusement we when watching the destruction of lives on reality television. One thing that is for certain is that they did not watch as decent human beings.

There is no question that the criminal justice system is racist, and that the American political system is vicious. Black people have always suffered the worst beating and battering in America, because the mental disease of racism is too viral to quickly heal. African Americans were three-fifths human during slavery, and it seems that in 2014, with a biracial man in the White House, they are four-fifths human. America has made progress, but no one but the blind can believe that black life has equal value as white life.

These “systems,” however, are not giant computers. They are institutions run and powered by people. The people are the face of America. Darren Wilson, Robert McCulloch and the jurors who failed to punish police officers for killing, are part of the silent majority. They are the same silent majority of voters responsible for the election of officials who dismiss poverty as an unimportant issue, who assault public education, and who continually call for the enhancement of killing Muslims in the Middle East. They are the same silent majority, 66 percent according to polls, who support air strikes against Iraq, and they constitute the 40 percent, which will only grow if the propaganda campaign picks up again, that support a ground invasion.

For a particularly horrific glimpse into the creep show of American values of violence, consider that, according to a recent Pew Report, 51 percent of Americans believe that torture, such as rectal feeding, waterboarding and other gruesome methods described in the Senate Intelligence Committee report, is justified. Another 20 percent said that they have no opinion.

It seems the jurors in the Brown, Garner and Diggles cases were easy to deceive, and in the case of Ferguson, likely because they had little knowledge of American history or law. They are likely part of the 71 percent of Americans who never read a newspaper, the 80 percent of American families who bought no books last year, and the 70 percent who cannot name a single part of the Bill of Rights.

They are the natural products of a culture that has steadily mutated into embracing destructive hyper-individualism. The for-profit healthcare system, the prison-industrial complex, and the bitter segregation along race and class lines in the public education system are also natural products, along with deranged and violent police who face no consequences for shedding blood. The victims of this culture, whether they are the children caught in the crosshairs of drone strikes or the women beaten in police stations, are made invisible or insignificant by myths of American exceptionalism and benevolence.

Speaking to me about Michael Brown’s death and the racial divide in America, Jesse Jackson said, “We’ve removed the layer of skin—the epidermis—that separates us. So now we can vote together, work together, date each others’ sisters, but this thing is bone-deep. That’s what people don’t want to acknowledge. We know how to survive apart, but we must learn how to live together.”

The acknowledgment of America’s need to learn to live together has a simplicity that masks its profundity. Robert Putnam, in Bowling Alone, documented the extent of Americans’ isolation from each other. Mass shootings, rates of violent crime higher than the rest of the developed world and outrages like Garner's and Brown’s deaths demonstrate that the inability to peacefully coexist in America goes beyond race. It is a bone-deep dysfunction with social costs, political implications and spiritual disasters. Inequality will continue to grow and injustice will continue to worsen until America is made to actually deal with its levels of selfish indifference to suffering, from ordinary people on grand juries to those who occupy the highest thrones of power.

The sane minority might ostensibly protest the racism of the criminal justice system, but they are actually demanding that America become a civilized society. No civilization would tolerate what America has recently done, but it is that very concept —the idea of civilization—that the silent majority so fiercely seems to hate and reject.