The horrible year in cable news (pt. 1): How we all lost our minds

From Ebola to ISIS to the vanishing airplanes, televised fearmongers were out of control in 2014 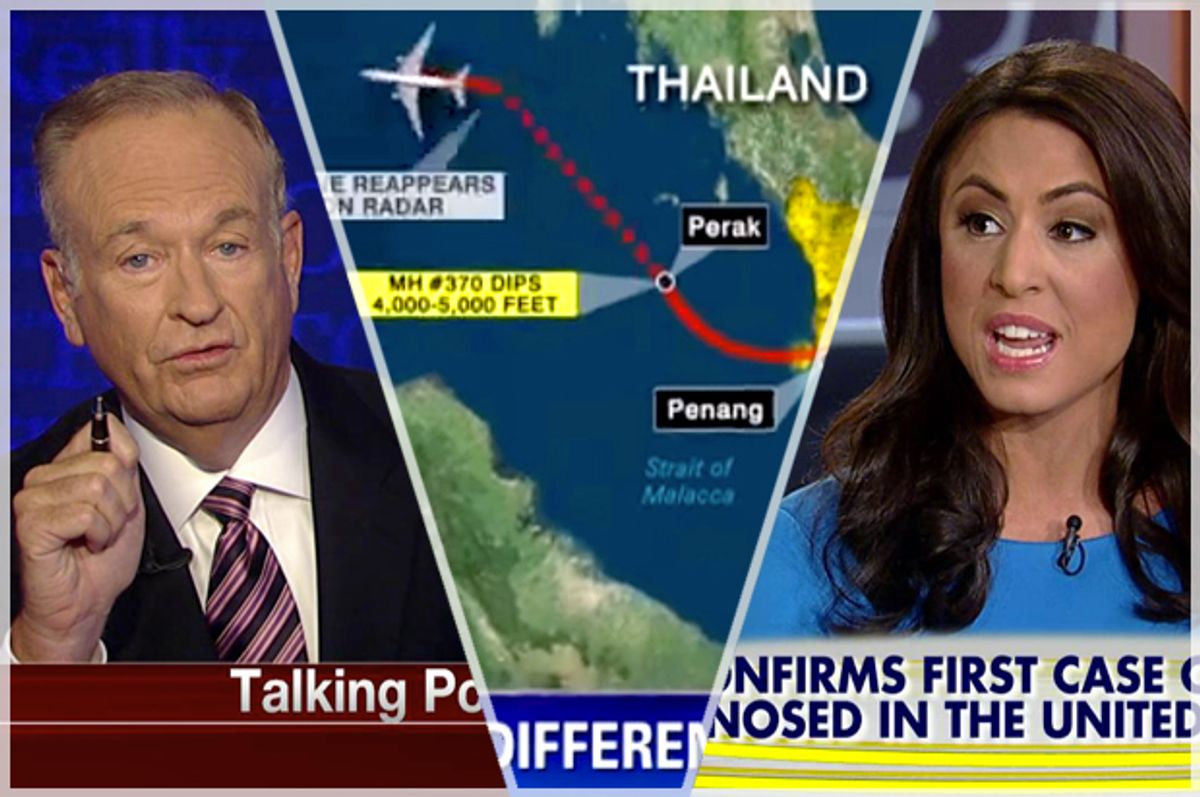 2014 was the year our nightmares came true: planes fell out of the sky, a gruesome virus killed thousands, a terrorist organization made its way through the Middle East, decapitating Americans on camera and killing many, many more. Were these ongoing stories important? The most! Were they scary? Hell yes. Were they the end of the world? Not to be flip, but no, not really. But you wouldn't have known it from turning on the TV.

Here are 2014's most irresponsible, outrageous, unforgivable moments of sensationalism and fear mongering.

The disappearance of Malaysia Airlines Flight 370

On Saturday, March 8, MH370 left Kuala Lumpur at 12:41 a.m., bound for Beijing. The plane, carrying 239 passengers, never reached its destination-- and to this day, no one really knows why. But that didn't stop the media from wildly speculating about every possibility (and impossibility), and also from ceaselessly reporting that, yes, the plane is still missing.

Take HLN, for example, which asked a psychic to find the missing plane:

CNN's Don Lemon asked if the plane was sucked in by a black hole:

MSNBC's Krystal Ball got prank called (to be fair, this was really her producers' fault):

The rise of ISIS

ISIS, or the Islamic State of Iraq and the Levant, was once an outgrowth of al Qaeda in Iraq, but in February of this year, the two groups split up, largely because the former was too violent for the latter. Now, the group's goal is to establish a Sunni Islamic state in the region--it currently occupies land in Iraq and Syria that is, according to Vox, around the size of Belgium. The terrorist group gained widespread notoriety after filming the beheadings of American journalists James Foley and Steven Sotloff.

In 2014, the world saw the largest outbreak of Ebola in history. The epidemic was concentrated in West Africa, with most of the cases occurring in Guinea, Liberia and Sierra Leone, where over 7300 people died from the disease, and over 19,000 were likely infected. It is a horrible illness, involving the rapid loss of bodily fluids, and the world was appropriately sympathetic to region's plight. But then Ebola came to America via Thomas Eric Duncan and we went truly bananas.

CNN's Don Lemon interviewed the writer of the novel "Outbreak" as an expert:

And Andrea Tantaros suggested that Africans with Ebola would "seek treatment from a witch doctor":

The war on climate science and/or Christmas

These two are pretty self-explanatory. President Obama and the Environmental Protection Agency have pushed a number of measures aimed at reducing ozone and carbon emissions this year-- something that makes politicians and pundits with vested interests in whatever is producing emissions uncomfortable.

An "expert" on CNBC (spoiler: not an actual expert) said that the demonization of carbon dioxide is similar to that of "Jews under Hitler":

Unrelated: conservative pundits have declared that growing secularism in the U.S. is a sign of a "war on Christmas."Again.