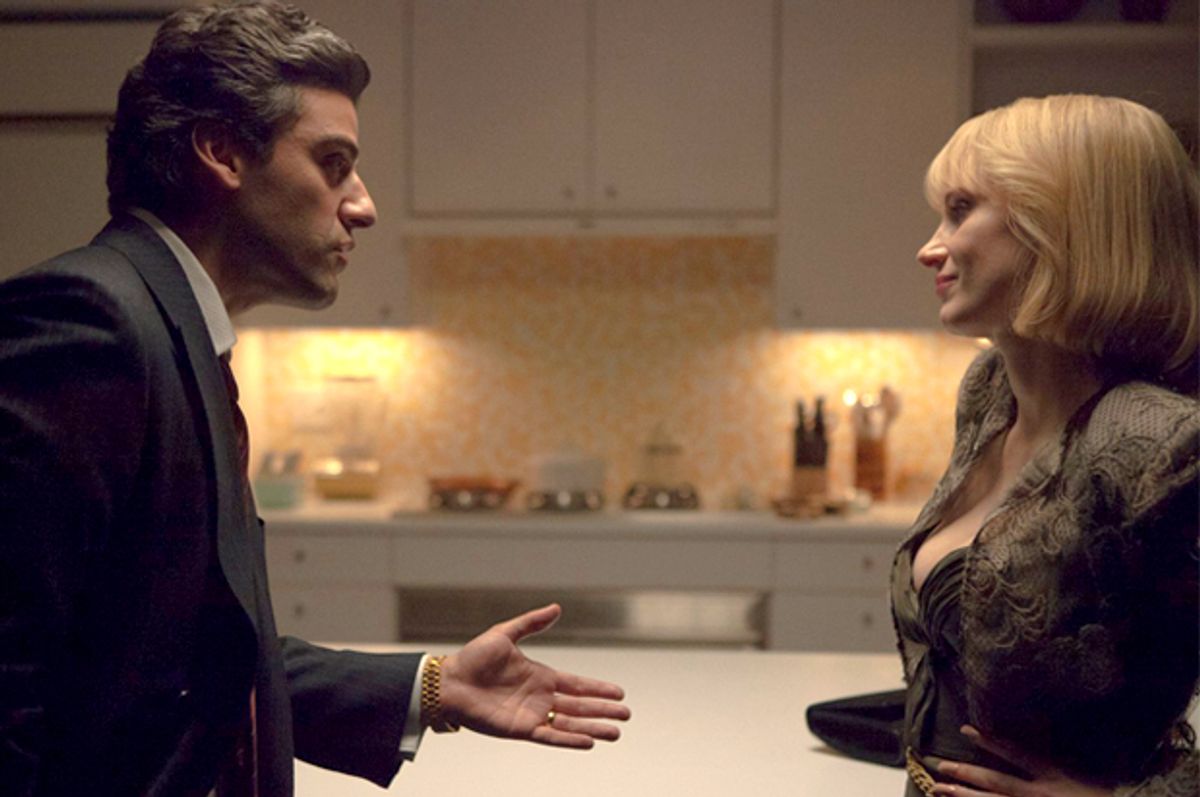 There are two principal audience segments for J.C. Chandor’s brooding would-be epic of crime and capitalism, “A Most Violent Year”: People who can clearly remember New York in 1981 – pretty much the low point of the city’s postwar decline into criminality and dysfunction -- and people for whom that time and place represent a zone of myth and mystery at the outer edges of cultural memory, only distantly connected to the Trumpified, chain-store city of today. Chandor, previously the director of the wordless Robert Redford sea odyssey “All Is Lost” and the talky Wall Street procedural “Margin Call,” was a small child in 1981, and his vision of the legendarily Darwinian and corrupt city of that era has a certain hazy, awestruck amazement. I mean no disrespect in saying that his movie will seem far more resonant to the second group than the first.

I was rooting for “A Most Violent Year” from first shot to last, and it’s a serious and ambitious drama that has numerous virtues. Maybe too many; you sometimes get the feeling that Chandor is so committed to seriousness, subtlety and moral ambiguity that he forgets about suspense and storytelling and letting the audience have some fun. (This movie is like the penitent, hungover A.A. meeting that follows the all-night cocaine overdose of “American Hustle.”) Those virtues include an outstanding cast headed by Jessica Chastain and Oscar Isaac; the cinematography of Bradford Young, channeling both ‘70s crime thrillers and later Sven Nykvist, and washing the wintry landscape in polluted Hudson River light; exemplary production design that goes almost to period caricature and stops just short; and a steadfast refusal to reassure you about who is good and who is bad, who should thrive and who be punished.

Chandor has something like a combination of “Macbeth,” a Theodore Dreiser novel and “The Godfather Part III” in mind with this story about Abel Morales (Isaac), a suave, fast-rising but fundamentally decent Latino entrepreneur who has carved out a niche in the heating-oil business through hard work and shrewd salesmanship, only to discover that in the crime-ridden New York of 1981, those are not enough. Abel’s trucks are being hijacked by an unknown enemy, and his drivers left brutalized or pistol-whipped on the weedy margins of the city’s bridges and highways. Meanwhile, Abel has overextended himself in an ambitious real estate deal with a Hasidic landowner, and soon discovers that no banks will touch him because he’s facing investigation and possible indictment on unclear charges. He’s likely to lose everything he’s worked for his entire life if he can’t figure out who’s trying to destroy him and make it stop.

As you learned if you saw “Margin Call,” Chandor has a Karl Marx-like understanding of how capitalism functions on a granular level, and renders even the most picayune details of Abel’s struggle to survive grimly fascinating. But perhaps the most important struggle is within Abel himself, a Corleone-in-reverse who continues to claim that he’d rather go broke than go dirty, despite the mounting evidence that it’s a little late for that sort of scruple. Abel’s ballsy, disillusioned wife, Anna, certainly has a few things to say to him about his innocent and deluded faith in the American dream. This is yet another convincing performance from Chastain, even if hideous spectacles and severely teased hair are not enough to make her look the part of a hard-boiled Italian-American girl who has risen from the bungalows of Brooklyn. It’s Anna who runs the finances and keeps the books; it’s Anna who realizes that Standard Heating Oil is at war with a competitor (if not several) who must be forced to reveal himself; and if the D.A.’s investigation finds actual crimes inside the company, it will have been Anna who committed them.

All this is rendered, as I said already, in memorable and exemplary fashion. And it’s all just a little more boring than it ought to be. If Isaac and Chastain both get awards nominations, they will deserve them, and the cast also features Albert Brooks as Abel’s lawyer, Alessandro Nivola as a suave and sinister Mafioso competitor and David Oyelowo (Martin Luther King Jr. in “Selma”) as the half-apologetic D.A. hoping to bring Abel down. Chandor has accumulated most of the ingredients of a great film, and partly assembled them, without ever finding that third or fourth gear that would allow these characters and their story to transcend the grimy, claustrophobic, overdetermined universe that surrounds them. “A Most Violent Year” has both a car chase and a foot chase; it refers to classic crime films by Sidney Lumet or William Friedkin, but can’t duplicate their sense of momentum or urgency. But it also isn’t abstract or contemplative enough to break free of those expectations and function successfully as an art-house mood piece.

I feel confident that Chandor would say his movie isn’t really about 1981, but just happens to be set then, at the symbolic nadir midway between the catastrophic white flight that transformed New York in the ‘70s and the financial boom that began to transform it again in the ‘90s. He’d be right; this is a story about the true costs of capitalism and the meaninglessness of good intentions, and you could tell that anywhere in the world in 2010 or in 1910, or at any other point since the dawn of the Industrial Age. But this particular story, although well worth seeing and admirable in so many ways, has gotten itself trapped in a doleful blue-gray historical vitrine that overwhelms it and chokes off its oxygen, much as the murderous social economy of New York in 1981 finally stifles its hero.

“A Most Violent Year” opens this week in major cities, with wider national release to follow.