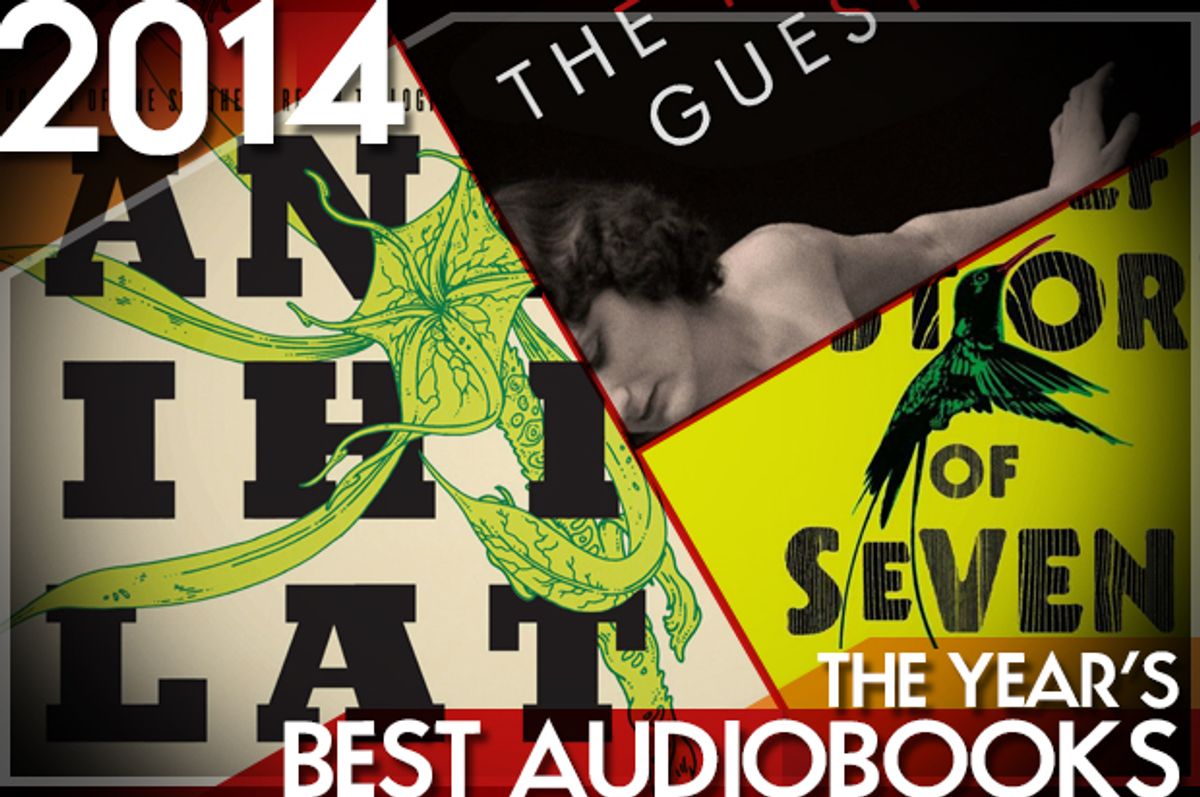 Podcasts may have been all the rage this year, but audiobook sales have been growing steadily as well. Recent converts can be found everywhere, clutching their smartphones and raving about Neil Gaiman's narrations of his own books or Edoardo Ballerini's reading of Jess Walters' "Beautiful Ruins." It can be difficult, however, to find those rare, extraordinary recordings, narrations that are true performances, rather than just a pleasant service dutifully provided for anyone who can't, for whatever reason, keep their eyes on a page. A really great audiobook requires a worthy text performed by a skilled actor (narrating is its own distinctive type of acting) who has been perceptively cast and directed. It doesn't happen as often as it should. Here are seven standouts from 2014.

Invisible Man by Ralph Ellison, narrated by Joe Morton
This recording isn't new, but I heard it for the first time this year, when the attempted banning of Ellison's classic in North Carolina prompted me to reread this favorite of my youth. Morton's may be the best single-actor audiobook narration I've ever heard, so it seems worth celebrating even if it's not fresh from the studio. Ellison's first-person account of a nameless man navigating a slightly absurd minefield of race, politics, sex and identity is both specific to the African-American experience and ultimately universal. Morton's performance is immediate, intimate, tragic and effortlessly natural.

Breakfast at Tiffany's by Truman Capote, narrated by Michael C. Hall
Capote's glimmering tale of being young, broke and a bit lost in New York City in the 1950s could not ask for a better narrator than Hall ("Six Feet Under," "Dexter"), one of the greatest actors of his generation. In this new recording, Hall perfectly captures the withdrawn, hesitant and keenly observant personality of Capote's narrator, who learns both how to be a writer and how to live from a charismatic party girl named Holly Golightly.

Brief History of Seven Killings by Marlon James, narrated by Robertson Dean, Cherise Boothe, Dwight Bacquie, Ryan Anderson, Johnathan McClain, Robert Younis, Thom Rivera
I read James' brilliant epic novel about crime, music and politics in 1970s Jamaica by going back and forth between the printed book and this multi-narrator recording. All the performances are electrifying, although Cherise Boothe as a perpetually disgusted would-be emigrant is glorious and fiery and funny. Hearing the Caribbean lilt of the Jamaican characters' voices deepens the novel's flavor. Having the pages to refer to makes it easier to revisit passages whose finer points you might miss as you're swept along in magnificent tide of James' vision.

Paying Guests by Sarah Waters, narrated by Juliet Stevenson
Stevenson, a familiar face to British TV and film audiences, is the go-to narrator for 19th-century novels told from a female perspective, which makes her very well suited to Waters' richly plotted fiction. This is the story of a genteel mother and daughter, fallen on hard times in 1920s London, who decide to rent part of their house to a pair of up-and-coming lower-middle-class newlyweds. Before long, the daughter has plunged into a torrid affair with the wife, and bloodshed ensues. Social class is always a key theme in Waters' fiction, and Stevenson uses the various characters' accents to delineate all its subtle permutations.

Annhilation by Jeff VanderMeer, narrated by Carolyn McCormick
This is the first book in VanderMeer's Southern Reach Trilogy, about scientists attempting to investigate an extensive area of coastline that has been somehow cordoned off from the rest of the country and returned to a pristine ecological state by forces unknown. All three books are available in audio format, but I prefer this one as a stand-alone, with all its unsolved mysteries and unanswered questions. It's the first-person tale of a highly solitary woman, a biologist, whose journey into Area X compels her to confront the forces that destroyed her marriage. McCormick's, pure, serene, rather methodical performance at first seems too stiff and then, gradually, reveals myriad gradations of loneliness, determination and awe.

Everything I Never Told You by Celeste Ng, narrated by Cassandra Campbell
Ng's story, set in an Ohio college town in the 1970s, begins with a missing high-school girl whose body soon turns up at the bottom of a lake. Her family -- her father is Chinese-American and her mother is white -- are left to puzzle out what happened and why. As premises go, the missing-girl device is shopworn, but Ng uses her death to crack open the unexamined undercurrents in the parents' marriage and the town's inability to accept it. Her prose is measured and eerily perfect, a tone that Campbell expertly matches with her narration. It's the sort of audiobook that occasionally makes you stop in your tracks while a sentence or moment sinks in.

The Hakawati by Rabih Alameddine, narrated Assaf Cohen
OK, maybe there's nothing extraordinary about Cohen's narration of this sprawling 2008 novel, but the book is so much fun I squealed with glee upon discovering that Audible Studios had dug into Alameddine's backlist and recorded it. "Hakawati" is an Arab term for a professional storyteller, and the novel alternates between a bickering modern-day Lebanese clan descended from a line of yarn spinners and the folk tales and legends they once told. The Arabian Nights-style tales include the adventures of an ingenious Egyptian slave girl named Fatima on a quest to help her mistress conceive a son and the biblical Abraham. The contemporary sections are a boisterous family drama. The novel as a whole is a cornucopia of stories in the traditional and modern mode, each one more diverting than its predecessor.