Battle of the billionaires: Why liberals shouldn't count on their rich patrons to win

The way liberal and conservative billionaires use their money for political change is different. Here's who wins 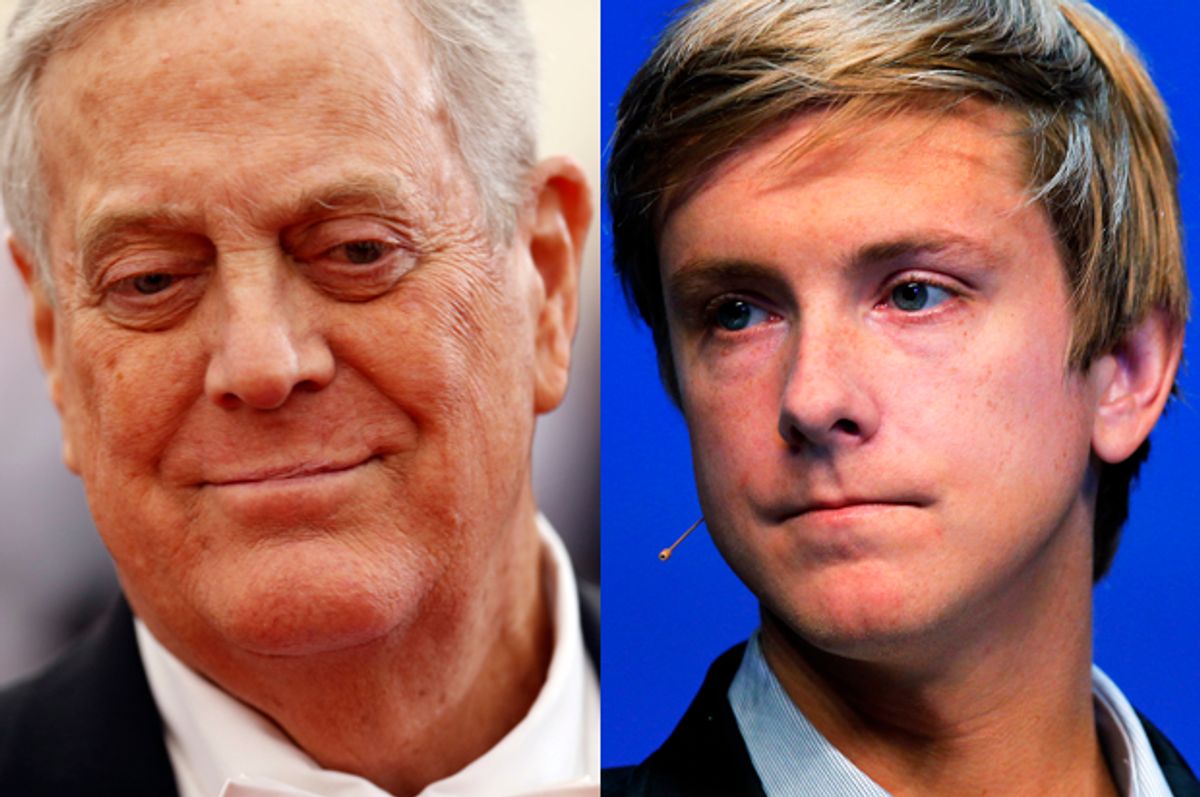 A lot has been said about Chris Hughes and the changes at the New Republic, and I don't have much to add to it. But I haven't seen anyone acknowledge the fact that while we might expect young tech billionaires to be caught up in Silicon Valley values, Hughes was perceived to be about something more. Remember, we all really came to know him through his high-profile association with MyBarackObama.com, which later morphed into Obama for America. It was the idea that he was a committed liberal billionaire that undoubtedly made many people believe that buying the New Republic was a political project rather than a money-making project. (Yes, you can insert the standard disclaimer about Obama not being a real liberal either, but that's beside the point.) Hughes wasn't supposed to be your standard-issue Silicon Valley geek billionaire who didn't get the Big Picture.

It's ironic that there was such consternation across the liberal landscape that a magazine that for many decades positioned itself as the home of liberal establishment contrarianism and only under Chris Hughes seemed to be turning itself into a publication with a much more straight-ahead ideology. But the upshot of the whole episode seems to be that people thought Hughes bought the magazine as a way to advance a political philosophy and it turned out that really wasn't his goal. And it raises an important issue: In this new world of billionaires in politics, where everything seems to be coming down to a sort of cage match between billionaires on the left and billionaires on the right, can liberals count on "their" billionaires to put their money where their hearts are?

This has actually been a long-standing discussion among activists on the left. Setting aside the natural worries about rich people of all political bents keeping one eye on their bottom lines, many liberal donors prefer to put their efforts toward specific charitable efforts they care about. It's very hard to argue with it -- those good deeds are necessary. But it is a very different approach to the way the right-wingers go about using their money to advance their political ideology and directly influence the political process itself.

Now one cannot really fault someone like Tom Steyer who is dedicating a lot of his money to fighting climate change.  That is one issue that is so profoundly threatening to the entire planet that you have to be grateful to anyone for putting their fortunes to work to fix it. But so many others are either like Hughes, who everyone thought was political but just turned out to be another tech entrepreneur putting his skills to work in the political field for a brief period, or they are dedicated to their specific causes and allegiance to mainstream Democratic Party politics. And that is definitely not what the Murdochs and the Kochs and the Adelsons and the Foster Friesses are all about.  They are attempting to dominate the political process by using their money to directly influence the ideological and political makeup of our society.  They leave no stone unturned. From Fox News to think tanks to super PACs to political campaigns they are using their fortunes to actively change American politics. Oddly, unlike their liberal counterparts, they seem to respect state power.

And that's a mistake. As the progressive writer and activist Norman Solomon said:

We need to occupy - literally and figuratively - Congressional seats for the 99 percent. Social movements need a healthy ecology, which means a wide array of activities and manifestations of grassroots power. That includes progressives in Congress. I say on the campaign trail that we need our feet on the ground and our eyes on the stars of our ideals. It's not good enough to have one or the other. State power matters - we've seen that from county and state offices to Washington, D.C.

And, as somebody who has written literally thousands of articles, 12 books, gone to hundreds of demonstrations and probably organized hundreds of demonstrations, I believe we always have to be protesting; we always have to be in the streets. It's not either-or. I want our feet on the ground to include change for government policies. Laws matter. Whether or how they are enforced matters.

I think people sometimes confuse their own individual preferences, talents, strengths and interests with the totality of what an effective movement needs to do. In Latin America, we have seen the tremendous power of combining social movements that permeate the grassroots with the ballot box. Whatever their shortcomings, if you look at what's happened in Brazil in terms of hunger and in other countries in the southern cone and elsewhere that not more than a couple decades ago were ruled by vicious dictators, they have been implementing genuinely progressive policies.

We have an opportunity here to get beyond dualistic thinking and start thinking of synergy rather than this counterposing of our options, which creates a false either-or scenario. Right now there is a tremendous awakening in this country about income inequality. People are fed up with war, and so many people are seeing that the status quo is a prescription for more suffering. We have to see this time as not for being dogmatic about one tactic or another, but seeing that in the context of non-violent, small-d democratic action here. Another way to put it: it is a historic mistake for progressives to leave the electoral arena to corporate Democrats and Republicans.

Chris Hughes may yet end up being a force for liberalism.  After all, it's not as if the magazine he bought had such a great track record in that respect, so perhaps his changes will actually be in the right direction in the end.  But this episode just shows that liberals and progressives need to be careful about how much faith they place in the idea that "their" billionaires will come to the rescue.  Even those with their hearts in the right place don't seem to understand that the right is fighting a battle over ideology and government power.  They haven't won it yet, but they will put everything they have into it until they do. And they have a lot.