From "Better Call Saul" to Larry Wilmore: The most anticipated pop cultural events of 2015

Sequels! Finales! And the impending domination of James Corden! 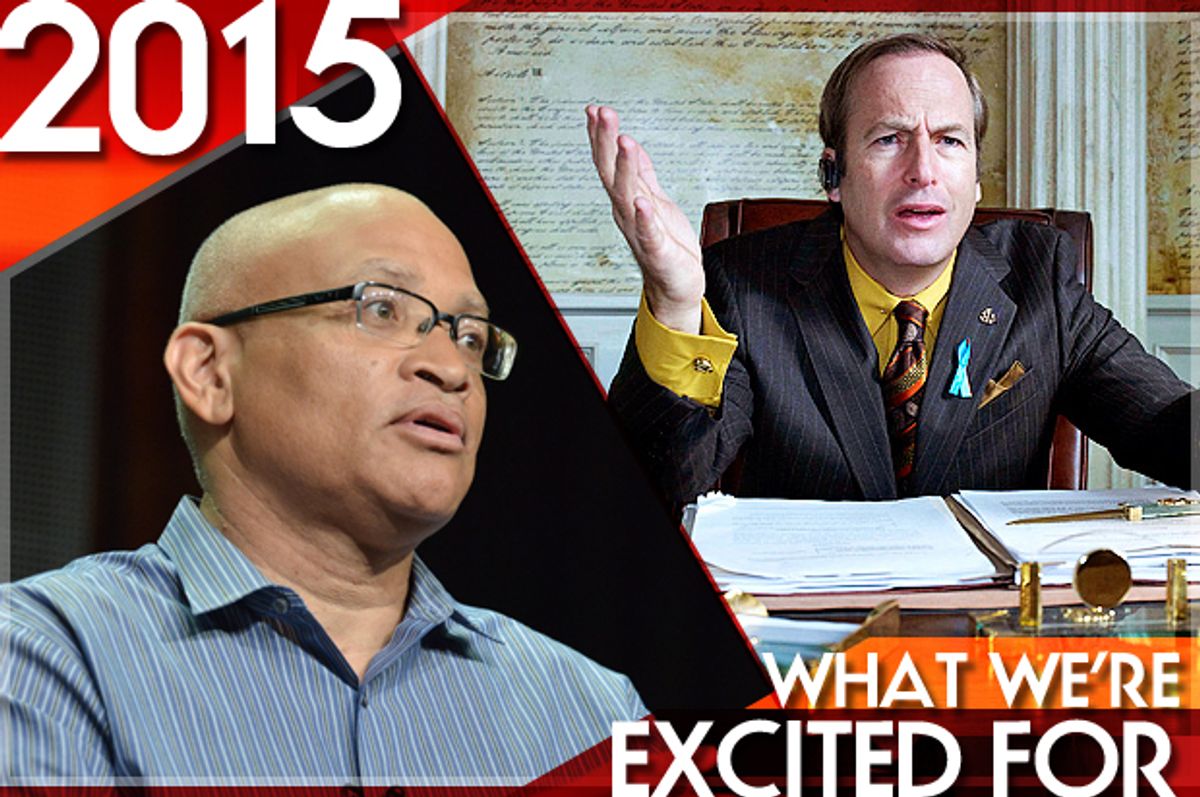 Of course there will be sleeper hits and breakout stars. But when it comes to the 2015 pop culture moments we're already regarding as money in the bank, how could we not have a good feeling about so many of our beloved favorites coming back -- even if, for a few of them, it's just to say goodbye.

There will be sequels and reboots galore this year, from "The Terminator" to "Batman" to "Jurassic Park" to "Pitch Perfect." But this is the mother lode. Fans have been going insane since the first trailer debuted in November -- more than a full year before the movie's anticipated release. All it takes is an ominous mention of "the dark side" and the swell of that famous music, and entire generations of moviegoers are saving a seat already. Bonus: the film's anticipated peeks into the lives of an older Luke, Leia and Han.

"The Buried Giant," by Kazuo Ishiguro

The author's first full-length novel since 2005's hauntingly beautiful "Never Let Me Go" promises only to touch upon "lost memories, love, revenge and war." If the March release is anything like the previous works from the man who gave us "The Remains of the Day" and "The Unconsoled," expect it to be one of the most deeply affecting new books of the year.

The possible return of Adele

She's been relatively quiet since her chart-smashing, ugly cry-inducing "21" nearly four years ago. But when her label confirmed in October that she wasn't releasing a new album in 2014, the implication that there might be something in the offing a little later was not missed. And previous collaborators like Ryan Tedder have said they've been working on new material with her. So come back, already, Adele. We don't even care if you're happy now, we still love you.

"Blackout: Remembering the Things I Drank to Forget" by Sarah Hepola

Yes, she's a Salon editor and contributor and we love her here. But Hepola's dark, wise and often terrifically funny insights into her own toughest experiences are unfailingly riveting, and there's no doubt in our minds that her debut memoir, coming in June, will be a sensation.

"No Cities to Love" by Sleater-Kinney

Eight years after their last tour and a decade after their last album, the punk icons return with a new album in January and international tour. Band member Janet Weiss promises, "We’re trying to push through, so desperately, to something bigger, that it just sort of comes out in this really powerful, forward-moving way" – and we want to be front row for all of it.

"The Nightly Show With Larry Wilmore"

The brilliant, acclaimed musical based on the acclaimed graphic memoir from bona fide genius and cinematic smell test generator arrives on Broadway at last in March. Consider this your official excuse to come to New York this spring.

What got us through the end of "Breaking Bad" was the promise that it would not be the end of Bob Odenkirk's slippery lawyer Saul Goodman. AMC's prequel takes place roughly six years before Walter White ever meets Goodman – a man who at this point in his story is named Jimmy McGill. How does a guy become Saul? We can't wait to find out.

The end of "Mad Men"

Creator Matthew Weiner already says he's bracing for mixed reactions to the show's highly anticipated final seven episodes.  But while it likely won't satisfy everybody, the very idea of bidding adieu to Don Draper has us in full anticipatory grief mode.

The year of James Corden

Those of you not already familiar with the British TV and Broadway star, prepare to fall in love (and bone up by binge watching the wonderful "Gavin & Stacey" on Netflix). Warm up with his turn in this month's screen adaptation of "Into the Woods," but when he takes the reins of "The Late Late Show" in March, you'll see what he's really made of. He's funny, he's quick -- and he can belt out a tune.

He had said he was going to try to "push it out before 2015," but if his infectious track "i" and the new track he debuted recently on "The Colbert Report" are any indication of what's to come, it'll be worth the wait. Early buzz calls the album "phenomenal," and we believe it.

Some call it Chicago's answer to New York City's High Line, but the decade-long transformation of three miles of the Bloomingdale Line into a sprawling public space looks to be a uniquely ambitious project – and one of the most gorgeous new parks in the country.