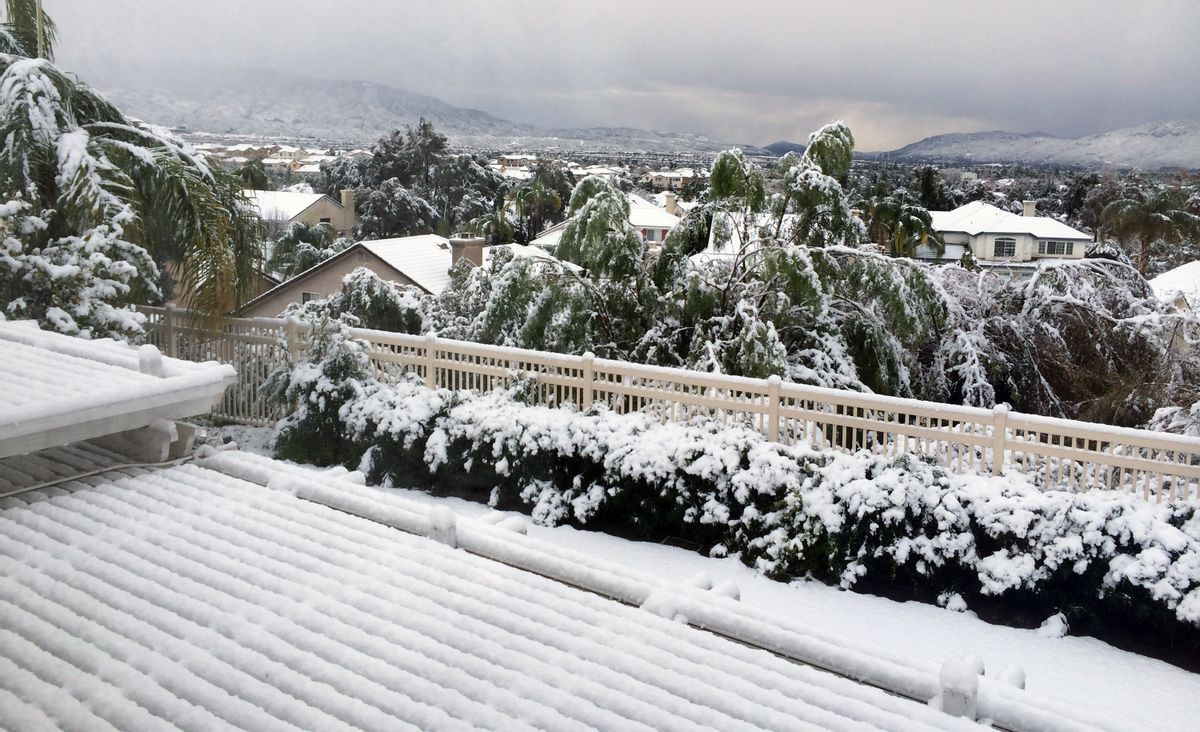 Bundled-up revelers planning to usher in 2015 along the Las Vegas Strip or watch flower-decorated floats in the Rose Parade in Southern California were dealing with near-freezing temperatures early Thursday after a blustery winter storm dumped show and ice across the West.

Marco Berri, 26, of Brazil said he would likely buy some scarves and gloves to keep warm in Las Vegas, but the cold wouldn't keep him inside.

"We're gonna be in the street. It doesn't matter how cold it is," said Berri, one of about 340,000 revelers expected to pack the Strip and the downtown Fremont Street area on New Year's Eve.

Wednesday's storm made driving treacherous in the mountains from California to the Rockies, and forced residents and party-goers in some usually sun-soaked cities to bundle up for a frosty New Year's.

The system swept from California into the Mojave Desert and Nevada, bringing snow to parts of northern Arizona and New Mexico along the way.

Ice and snow also made roads and highways dangerous along the panhandles of Texas and Oklahoma.

Gusting winds toppled trees throughout California, killing at least three people in the state in recent days. A harbor patrolman and another person were killed after winds broke boats loose from moorings at Santa Catalina Island off the coast of Southern California.

Four people were injured after strong winds turned several tents into flying projectiles at the Rose Bowl in Pasadena, authorities said. A video posted on YouTube shows several gusts lifting at least three tents with metal posts into the air and across a field as onlookers screamed and ran to get out of the way.

More than 180 motorists were rescued after they were stranded by the snow on mountain highways northeast of Los Angeles.

Still, many Southern Californians were excited to see snow at their front door.

Temecula City Manager Aaron Adams said his 12- and 14-year-old daughters were sledding outside his home on bodyboards usually reserved for the beach or pool. He said he has never seen as much snow — half a foot in some places — in the two decades he has lived there.

"You'd think you woke up in Tahoe or something," Adams said. "Our Old Town looks like a ski town."

In Flagstaff, Arizona, as much as 15 inches of snow was expected by New Year's Day.

Pasadena officials advised the thousands expected to line the streets for the Rose Parade to dress in layers and drink plenty of warm liquids as temperatures hover around freezing in the early morning hours.

The frigid weather did not stop dozens of people from gathering early Wednesday to camp out overnight and claim spots along the parade route. An enterprising salesman saw his supply of hand- and foot-warmers go quickly.

The cold snap could hurt the Rose Parade's famous floral floats. Some of the tropical flowers could turn black, and float builders were using twice the normal amount of glue to affix flowers because of the cold, said Charles Meier, creative director for Paradiso Parade Floats.

"This is a very unique business that really depends on one day a year, and that one day we have no control over the weather," Meier said.

California citrus growers appeared to pull through the storm unscathed. Potentially damaging cold failed to materialize overnight in most areas, and only a few spots required some form of frost protection, said Joel Nelsen, president of California Citrus Mutual.

Seventy-five percent of this year's crop was still on trees and yet to be harvested, he said.