Cooper Union once was a ray of hope for bright students who couldn't afford huge tuition. Now, things have changed 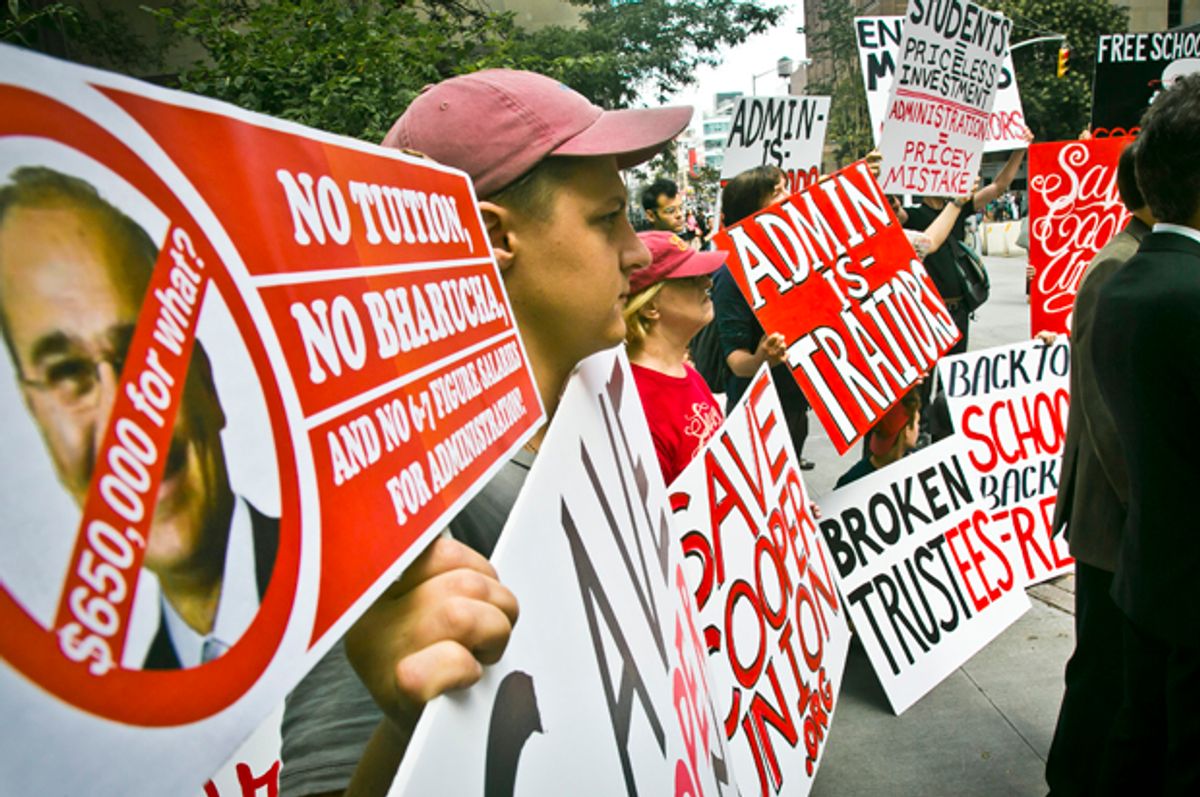 On May 8, 2013, a group of Cooper Union students entered the university president’s office. They exited on July 12, after a sixty-five day occupation in protest of the historically free school considering instituting tuition. In the interim, they held classes, teach-ins, and events in the space. Professors, trustees, alumni, and even the president, Jamshed Bharucha, visited them. Red lights illuminated the office every night and a banner reading, “Free Education To All” draped from its windows. When they finally vacated the office, they did so only after having reached an agreement with the administration and Board of Trustees. Part of that agreement was the formation of a working group that would include students, alumni, administrators, and trustees. Their task: find a viable financial plan to keep Cooper Union free.

Five months later, the working group presented their findings to the Board, who postponed their decision until January 2014 before voting in favor of charging tuition in the fall 2014 semester. Anticipating this outcome, alumni, professors, and students formed the Committee to Save Cooper Union. They are now pursuing legal action against the Board in a final effort to return to a free Cooper Union.

Peter Cooper, a self-taught industrialist, inventor, and philanthropist, founded the Cooper Union for the Advancement of Science and Art in 1859. He wished to provide New York City’s working class with the opportunity of a formal education—an opportunity he’d never been afforded—and was known for saying that education should be as “free as air and water.” Cooper Union originally charged for certain programs but became free to everyone in 1902, when Cooper’s heirs donated a property now located under the Chrysler Building, from which the school collects rent, and also matched a $600,000 donation from Andrew Carnegie.

But in October 2011, Bharucha, then in his first semester as president, announced that the school was in dire financial straits after bad investments and expensive construction plans. Tuition, he declared, was under consideration.

Students responded immediately with walk-outs that fall. Eleven students held a lock-in in December 2012 and then followed that up with the sixty-five day occupation of Bharucha’s office the following summer. Each direct action built off the previous one in an escalation that matched that of the Board’s process of officially choosing to impose tuition. In making that decision, the trustees turned down the working group’s plan, which offered both cost-saving and revenue-generating ideas whose net impact would have been $7,672,000. According to the working group report, it would have netted more than the tuition plan over twenty-five years. They also rejected an offer from trustee Jeffrey Gural to make a large donation that would have kept the school free for another year, allowing more time for developing alternative ideas.

“My concern in the back of my head was it was so difficult to work with this administration and they seemed so hell-bent on the misdirection of legally violating the charter that it was clear to me that there was a good chance at least that they were going to try and sabotage it,” describes Adrian Jovanovic, a Cooper Union alumnus, of his worries about the working group. “And so we started preparing from that right away, figuring out how to organize and what are the next steps: Who has actual authority over the Board that we can approach?”

The New York Supreme Court proved to be the answer. Jovanovic, along with art professor and alumnus Michael Essl, engineering professor Toby Cumberbatch, current freshman Claire Kleinman, and accepted student Isabella Pezzulo, who had to refuse her offer because of tuition, are now petitioners in a lawsuit against the Board of Trustees. Through two Indiegogo campaigns, they raised almost $260,000 to cover their legal fees. Filed in May, the petition outlines their argument that trustees who voted in favor of tuition breached their fiduciary duty. It also calls for an accounting, an injunction against tuition, and the formation of the Associates of the Cooper Union, a group called for in the Charter and Deed of Trust that would provide a check on the governance of the Board and have the power to remove trustees.

Two other aspects of the case are Cooper Union’s tax exemption, which is based on the school providing tuition-free education, and the Board’s failure to seek cy pres relief. The petitioners argue that the trustees’ decision to charge is putting that crucial tax-exempt status at risk and that they needed to petition the court for cy pres relief to change the terms of the trust before imposing tuition.

Both the Charter and Deed of Trust demonstrate how Peter Cooper aimed to serve New York City’s working class by providing free education through night classes, intended for people who worked during the day:

To regular courses of instructions, at night, free to all who shall attend the same, under the general regulations of the trustees, on the application of science to the useful occupations of life, on social and political science, meaning thereby not merely the science of political economy, but the science and philosophy of a just and equitable form of government, based upon the great fundamental law that nations and men should do unto each other as they would be done by, and on such other branches of knowledge as in the opinion of the Board of Trustees will tend to improve and elevate the working classes of the City of New York.

As the school’s focus shifted from night classes to daytime instruction, that mission to provide free education shifted with it, honoring the founder’s intention. That intention, however, is now up for debate in court. “The argument that Peter Cooper always intended his school to be free originated with the petitioners and the broader Cooper community,” explains Zoe Salzman, the Committee’s attorney from the Emery Celli Brinckerhoff & Abady LLP firm. “As lawyers, it was our job to put a legal framework around what was already a compelling argument based on the plain language of the trust, the charter and the school’s founding documents, and confirmed by 155 years of free education. We were approached in the early spring of 2014, as a last resort, after the Committee felt that it had exhausted every other possible option to restore free tuition and all of those options, including the Working Group report, had been rejected by the Board of Trustees.”

The five petitioners represent five different affected constituencies. Perhaps the most removed of them, Isabella Pezzulo, is also the most impacted. She is now a freshman at the University of Richmond, having turned down her offer to Cooper Union’s School of Art for financial reasons. Her participation in the lawsuit is crucial: It shows that harm has been done by the Board’s decision. The same goes for petitioner Claire Kleinman, a freshman art student: The Board’s decision is why she is one of the first to pay to attend Cooper Union.

On August 15, the Committee to Save Cooper Union held a press conference outside the courthouse where the petitioners and some supporters, including State Senator Brad Hoylman, spoke while students held handmade signs. “Trustees gone wild,” read one; behind the words, money burned. On that same day, the school’s vice president for communications, Justin Harmon, released a statement about the case:

The Cooper Union Board of Trustees will continue to vigorously defend against the lawsuit brought by The Committee to Save Cooper Union. We are confident that the law and facts are on our side, and that the suit will be quickly dismissed. No one associated with Cooper wanted to change a tradition as valued as the full-tuition scholarship, but dire financial realities required us to make tough decisions. The long-term survival of The Cooper Union was dependent on making this difficult change. We look forward to a swift resolution of this matter, and to welcoming our students back to a stronger, more secure Cooper Union this fall.

This statement followed one from May 27, in which Harmon had explained, “We are disappointed that the Committee to Save Cooper Union would choose costly litigation over constructive conversation. Cooper Union will continue to adhere to the vision of Peter Cooper, who founded the institution specifically to provide a quality education to those who might not otherwise be able to afford it. Beginning this fall, we have increased financial assistance to the most needy students.” He would not comment further on ongoing litigation.

The Board’s response to the Committee’s case argues that the Deed and Charter do not explicitly require free tuition for daytime classes and that it is their choice—rather than their obligation—to form the Associates of Cooper Union.

This legal action marks a departure from the direct action tactics that students have been using for years—a move that petitioners view as necessary. “The student actions can be ignored in a way that a ruling from a judge can’t,” says Jovanovic. “There are clear lines of authority that are already embedded in the charter: that the Supreme Court has authority over this and there’s an authority that the court system and the Attorney General and the Board of Regents have over the Board of Trustees that the students don’t have.”

Still, student organizing continues at Cooper Union, where creative direct actions have been a staple since Bharucha first announced that tuition was on the table in 2011. Current students, including the new class of paying freshmen, have no intention of sitting back and quietly waiting for the lawsuit result while that legacy of confrontation wastes away. It is those actions—particularly the 2013 occupation—that garnered international attention for not only the story of Cooper Union but also the story of rising tuition and increasing student debt nationwide. On December 8, students replaced the Cooper Union flag on top of the school’s main building with a red one, illustrating to organizers around the country that their fight did not cease when they filed the lawsuit and wrote their first tuition checks.

For the petitioners who remain on campus or connected to Cooper Union, this fight is a constant in their daily lives whose outcome will impact them tangibly. For every other U.S. student struggling to pay her tuition, watching her student loans pile up, that connection is less present but every bit as relevant. “I don’t really think there’s anything that spectacular about my particular experience because I worked really hard and had always wanted to go to Cooper and suddenly I can’t,” says Pezzulo, the University of Richmond freshman. “Despite the fact that I’m not at Cooper, it’s a problem that’s just bigger than Cooper.”