"You have to go on a journey": How one man traveled to the end of the Earth in search of spirituality

Bruce Feiler went on six pilgrimages in a single year 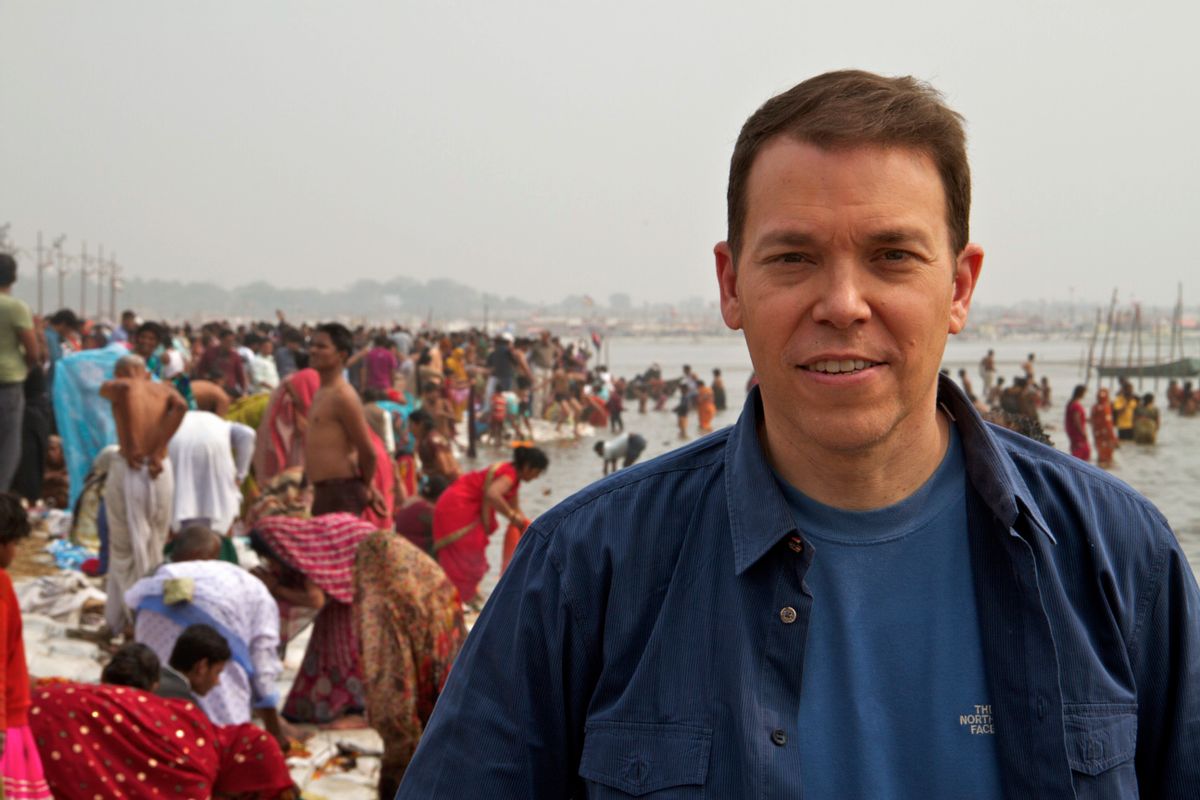 Each year, millions of people embark on spiritual pilgrimages or journeys that will take them across the globe in search of answers to life's biggest questions. Bruce Feiler, a renowned expert on religion in modern life, took this feat to the next level, becoming the first person ever (he thinks) to complete six pilgrimages in one calendar year.

Feiler's six-part PBS series, "Sacred Journeys With Bruce Feiler," tells the story of his encounters with American pilgrims who traveled to Lourdes, Shikoku, Jerusalem, the Hajj, the Kumbh Mela and Osun Osogbo. Salon spoke with Feiler to learn about his groundbreaking, trying adventure and to learn about humanity's common quest for spirituality and meaning.

How did this specific project come about?

I've been for most of the last 20 years going on religious adventure trips like this, "Walking the Bible," "Abraham," "Where God Was Born." "Walking the Bible" became a three-hour series on PBS in 2006. WGBH, which is the public television station in Boston, came to me five years ago and said they wanted to do a show on pilgrimage, was I interested in partnering with them. And I said no. I said I didn't want to make a show that was a series of Wikipedia entries about strange people going on strange journeys in strange places. But what I said and what I felt then and what I feel now is: What is the thing you hear most often in religious circles these days? That is, "I'm not religious, I'm spiritual. I'm on a journey of some kind." And I really wanted to make a series in which whatever journey you're on you could find that reflected in what you were seeing on the screen.

So we got together. It took us five years. It was a year to plan it, a year to raise the money, a year to find the pilgrims, a year to shoot it--I did all of these journeys in the course of one year. I'm assuming or guessing I'm the only person who has ever done it. It hasn't been logistically possible in the past. The pilgrim part was very important because in "Walking the Bible," the TV show, I was in every scene basically and I was the one going through the intellectual and emotional transformation. But I obviously couldn't be expected to go through the emotional transformation in all these different places, so getting the pilgrims was really important because without the emotional component you've got those Wikipedia entries I wanted to avoid.

How did you find the featured pilgrims?

It was challenging because we needed to find people who were going, we needed to find people who were willing to share their story, but I think the power of the series at the end of the day is in their stories. Take Lourdes [France], for example: we traveled, as you know, with 40 wounded warriors. People have their legs blown off, they were blinded, an African-American sniper from Kansas who literally had a grenade go off in his mouth. They make this journey, and to me, the juxtaposition of these grizzled war veterans who have seen some of the worst of human nature and this 14-year-old peasant girl who sees the Virgin Mary 150 years ago, that tension between the purity of that story and the intensity of the veterans is remarkable. And where the emotion of the show comes from.

What is the difference between spirituality and religion? How is American religion evolving in relation to that difference?

Well, I think that organized religion is more threatened than ever before. Attendance is down, membership is down, but it's not down that much. Here's what I think is going on. The idea that you would go to a building at the time of the building's choosing and sit in a pew while someone stands up on a high platform like a mountain and tells you what to think and believe from a text that has been closed for hundreds or thousands of years--every part of that is completely anathema to how we live today.

People want to be more interactive, they want to do things on their own schedule, they want to tell their own story, they don't want to just listen to other people's story. So what's going on is that people are pulling away from formal institutions, but they're not giving up on these core questions about who am I, how do I get through difficult times in my life, what does it mean to have values, how can I serve my community and is there a higher calling in some way. So what happens is people are breaking away from the institution but they are still asking the big questions, and that's exactly where pilgrimage fits in. Because a pilgrimage is at its core a gesture, or an action. It's saying that I'm going to take a step. I'm going to figure out what I really believe and I'm going to determine for myself how I want to live my life. Whereas traditional religion is much more passive, going on a sacred journey is much more active. That's why pilgrimage is so popular today.

There was this U.N. study, the United Nations held the first world conference of tourism in its history in September in Spain, and in conjunction with that they released a report that says a third of all tourists around the world every year are pilgrims. That's 330 million people a year. This is not some hype machine thing, this is the U.N. So spiritual pilgrimage is much bigger today than it's ever been before as a phenomenon, and it's a combination of people determining their own beliefs, coupled with the ease of international travel, coupled with general mobility with which we all live. Bear in mind, 50 percent of Americans will change faith in the course of their lives, four in 10 Americans are in an interfaith marriage, so there is just a lot more fluidity. We no longer just accept the religion that our parents gave us. We each have the opportunity and, in effect, the obligation to decide what we believe for ourselves.

Directly from that, you did all of these things back to back to back. What are some of the similarities that you saw between the pilgrims? What's it like doing this kind of case study in comparative religion?

Another similarity is these pilgrimages are very difficult. The travel is hard, the food is not great, the accommodations are not wonderful and yet somehow the idea of persevering and prevailing over those difficulties becomes one of the most satisfying parts of the whole experience. It just reinforces this idea, which is inherent to all religions, of resilience; of, when it gets dark, we can help you find the light. That's in some ways where religion really thrives.

And I would say sort of a final similarity is that they are very communal. Often people go for very personal reasons but along the way they build up this community of the seeker and I think in that people find a lot of comfort and intimacy. I think that a key part of religion has always been the community that builds up around it and that especially happens when people from different cultures in different moments in life and different experiences are all thrust together somehow on this journey and they're bonded by the suffering.

Is there a nugget of the philosophy of the pilgrimage, the overarching themes of it, that we can take with us for people that can't do something like this? How do we integrate these ideas?

I think that we're coming upon the holiday season and there, light is a big part of many holiday traditions. And I heard someone talk recently about Hanukkah and about why eight candles are lit at the festival of Hanukkah. The idea was that we want-- it's the darkest time of the year. It's no accident that all these holidays happen in the darkest time of the year and that they all have as central to their festivities the lighting of candles, the idea of light. Why is that so powerful at this time of year? Because at the darkest time of the year, there can be light. And you want to light all the candles at once--you want to just press a button and have everything be bright, you want to know that everything is going to work out and be a happy ending, but it doesn't necessarily work that way. You have to light one candle at a time and if you light one candle at a time, eventually everything will be illuminated.

I think that is key to the idea of pilgrimage. You can't just press a button, download an app, send out a tweet and get through a particularly dark moment in your life. You have to go on a journey. You have to go through the suffering, you have to endure the bad food, you have to get over the bad accommodations. You can't get to the destination that you're looking for without going through the journey. To me, that is the nugget. When it gets difficult, put one foot in front of the other. Get off the sofa, set out on that journey, and you'll get somewhere. It probably won't be where you thought you were going to get, but ultimately you will get to a new place.

That's lovely. One last question: You haven't mentioned God at all. How is someone like me, who isn't necessarily religious, supposed to interact with these ideas?

If you think of all the people that I talked to over the course of these pilgrimages, I would not say that God would come up in all those conversations. I'm thinking of these two graduates from medical school, these Taiwanese Americans who I met in Japan and they were like, "We're science people, but we've just come out of graduate school and we've been doing science all the time but we're about to interact with patients and we realize that we need more than just science. We need to learn how to talk to people and we thought that this journey could help us learn the skills to communicate with people in difficult situations."

I met people who were coming over alcoholism, who were getting over the death of a parent, who had just lost a job, so I would say that God is not something that all of these people are seeking. They're seeking answers to where they are in their life journey. For some of them, it will be God, but certainly it's not universal and it's not mandatory.