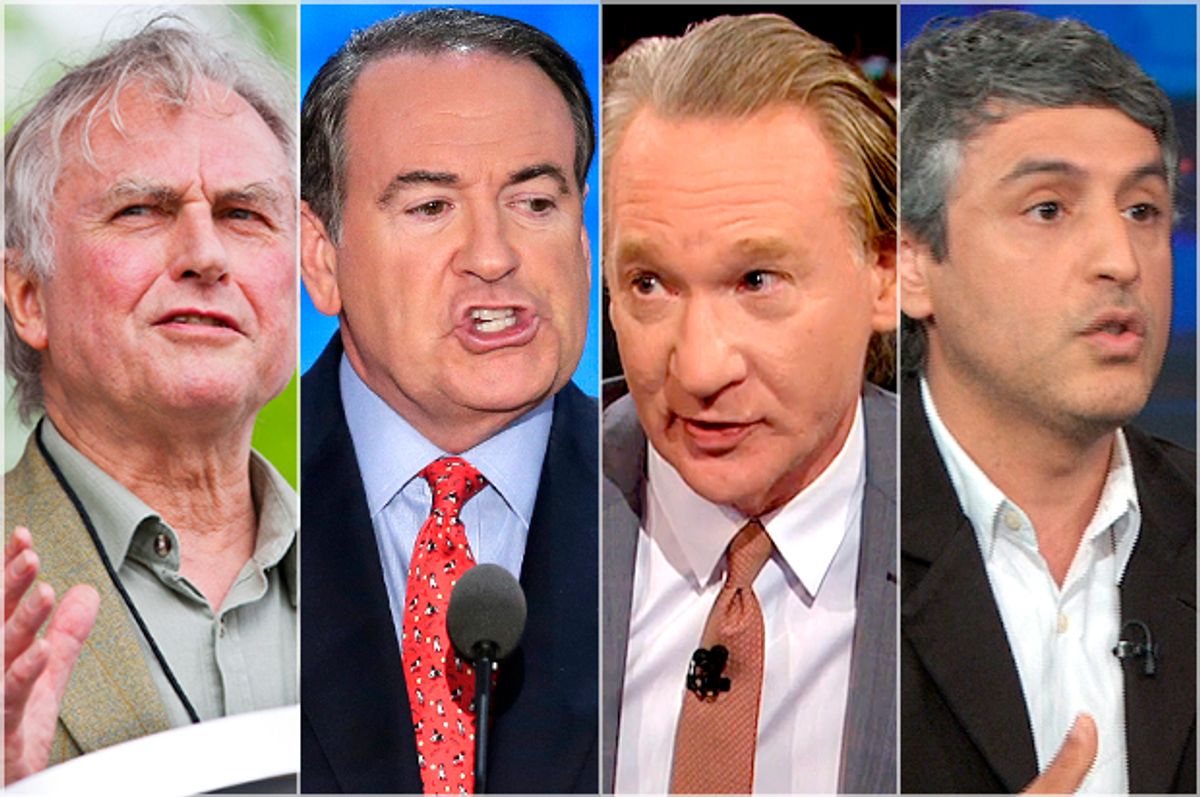 I would like to thank Reza Aslan.  In his recent Salon rebuttal to denunciations (including mine) of religion put forward by people the media has come to call New Atheists, he resurrects a word the late Christopher Hitchens, now three years departed, used to describe himself: antitheist.  (Aslan even provides the link to a relevant Hitchens text from long ago that is well worth reading.)  Antitheists hold that the portrayal of our world and humankind’s place in it as set out in the foundational texts of the three Abrahamic religions constitutes, to quote Hitchens, “a sinister fairy tale,” and that “life would be miserable if what the faithful affirmed was actually the case.”  The reason?  “[T]here may be people,” he wrote, “who wish to live their lives under a cradle-to-grave divine supervision; a permanent surveillance and [around the clock] monitoring [a celestial North Korea],” but he certainly did not.  The eternally repressive alternate reality concocted by the religious of eons past, if true, would be, in his words, “horrible” and “grotesque.”

Well said!  Speaking for myself, I’m happy to be labeled an antitheist.  Or an atheist.  It makes no difference to me.  The point is, I do not, cannot, believe, and do not wish to believe.  I have never envied people of faith their worldview, never esteemed the ability to consider something true without evidence, never respected as morally superior those who manage this feat of credulity and illogicality.  For that matter, I have never had an experience for which I sought a religious – that is, supernatural or superstitious – explanation.  For Aslan, though, the semantic distinction between “atheist” and “antitheist” is key and intended to discredit those speaking out for rationalism and against religion.

“Not only is New Atheism not representative of atheism,” he writes.  “It isn’t even mere atheism.”  It is in fact antitheism, which he finds “to be rooted in a naive and, dare I say, unscientific understanding of religion – one thoroughly disconnected from the history of religious thought.”  He contends that “atheism has become more difficult to define for the simple reason that it comes in as many forms as theism does” – negative atheism, positive atheism, empirical atheism, and even agnosticism.  He cites an obscure poll dividing nonbelievers into categories – academics, activists, seeker-agnostics, “apatheists” and “ritual atheists,” with the least numerous (and hence ostensibly least credible) being the antitheists, who account for only 12.5 percent.  His conclusion: “the vast majority of atheists – 85 percent according to one poll – are not anti-theists and should not be lumped into the same category as the anti-theist ideologues that inundate the media landscape.”

Just how an atheist’s understanding of religion per se differs from that of an antitheist Aslan does not say.  Neither of them, after all, believe in God.  And is he saying that an atheist’s concept of faith is more “scientific” (and thus presumably more accurate) than an antitheist’s?  Doubtful: Aslan is a Muslim.  The critical factor would appear to be that unlike (upstart) antitheists, (old-time) atheists, at least as he sees it, don’t speak out much about religion.  Presumably, (plain-old) atheists keep quiet and humbly listen to scholars such as Aslan explain away the role of faith in, for instance, the barbarities that assault us daily in news from abroad.  If, however, atheists forcefully advocate their rationalist convictions, they become antitheists and join the negligible 12.5-percent minority of his poll, to be safely dismissed or regarded as an annoyance.

These are questionable assumptions, to put it charitably, but they are beside the point.  Aslan is hoping to discredit and classify into irrelevance those who publicly insist, as I have (and he quotes me), that religion is “innately backward, obscurantist, irrational and dangerous.”  Backward, because it relies not on reason for solutions, but on looking to ancient texts for ready-made answers.  Obscurantist, because it discourages searching for truthes about our world using empirical methods.  Irrational, because (for starters) the very notion that this or that shepherd or merchant ages ago was chosen by a divine being to deliver a message valid eternally and for all humanity offends reason and commonsense.  Dangerous, because (again, just for starters), armed with “holy” texts, the faithful practice all sorts of mischief and savagery, damaging both members of their own communities and those outside them.  But atheist or antitheist, no matter: what counts is the shared bedrock of nonbelief, the refusal to accept as fact, and defer to, what is asserted without evidence.

There can be only one reason that Aslan adduces his taxonomy of nonbelievers: to confuse the argument, this time by claiming that atheists (or antitheists) are busy propagating a fundamentalism of their own, and a potentially murderous one at that.  Once harmless, some of the faithless, in his telling, have been horribly transmogrified into wannabe tyrants.  He opens a brief but otherwise interesting historical excursus on the roots of nonbelief by erroneously deciphering the Greek roots of the word atheist, atheos, which breaks down not as “without gods” but “without god.”  In any case, antitheists, from the middle of the 19th century, he says, have professed a “stridently militant form of atheism,” and seen  “religion as an insidious force that must be rooted from society – forcibly if necessary.”

To lead readers to this conclusion, he presents a misapprehension of history from which he draws an incorrect analogy injurious to New Atheists.  He announces that Marx’s vision of a “religion-less society was spectacularly realized with the establishment of the Soviet Union and the People’s Republic of China – two nations that actively promoted ‘state atheism’ by violently suppressing religious expression and persecuting faith communities.”  But it wasn’t “atheism that motivated Stalin and Mao to demolish or expropriate houses of worship, to slaughter tens of thousands of priests, nuns and monks.  It was anti-theism that motivated them to do so.”

Untrue.  In both countries, faith enjoyed nominal constitutional protection as a private matter and was never outlawed, lingering on despite official efforts to the contrary.  Militantly atheist, the communist governments of the two countries opposed religion because it rivaled the all-encompassing state ideology they were bent on inculcating in their subjects.  This was particularly true in the case of Russia, where the tsar had claimed a divine right to the throne and ruled as God’s viceroy on earth, and the Russian Orthodox Church functioned as an arm of the state.  Lenin and then Stalin waged a decimating war on the Old (faith-buttressed) Order, with the clergy numbering heavily among their countless victims, with many houses of worship destroyed or expropriated.  But Stalin eventually had to backpedal and enlist the Church to help him rally the masses in World War II.  The point is, both Russia and China aimed to break resistance to their versions of Marxism, with the goal of establishing dictatorial temporal power.

(Perhaps, though, religion did play a part in deforming Stalin’s psyche.  He was a seminary student until he found his calling with the Bolsheviks.)

But back to New Atheists and antitheists and their alleged penchant for dangerous fundamentalism.  Having equated them with history’s most notorious tyrants, Aslan provides incendiary quotes from Richard Dawkins and Hitchens, and poses the question: “If you honestly believed [such terrible things] about religion, then what lengths would you not go through to rid society of it?”

Aslan is not alone in saying this.  Religion scholar Karen Armstrong suggested much the same in a recent Salon interview.  But both are wrong.  Rationalists – I’ll dispense here with Aslan’s spurious taxonomy and use a more appropriate term – are assertively making their case because religion, since the Reagan years, has been abandoning the realm of private conscience (where it has every right to be) and intruding itself into national life, with politicians and public figures flaunting their belief, advocating and (passing) legislation that restricts women’s reproductive rights, attempting to impose preposterous fairy tales (think intelligent design) on defenseless children in science classes, and even, in the case of Texas, recasting the Constitution in school textbooks as a document inspired by the Bible.  Abroad, militants pursuing Islamist agendas have been raining death and destruction on entire populations, with religious extremism the main cause of terrorism the world over.  Given the possibility that terrorists may acquire weapons of mass destruction and nuclear states with faith-based conflicts may let fly their missiles, religion may be said to endanger humanity as a whole.  No one who cares about our future can quietly abide the continuing propagation and influence of apocalyptic fables that large numbers of people take seriously and not raise a loud, persistent, even strident cry of alarm.

Aslan has often argued that we atheists are eschewing interpretation and reading religious texts too literally.  Well, if we want to see religion as the majority of believers do, we should continue to do so: three-fourths of Americans believe the Bible to be the word of God – numbers that, to the shame of the Republic, find reflection in our resolutely anti-science Congress.  Pew research shows that a majority of Muslims believe only one interpretation of Islam is possible.  Chances are it’s not the Latte flavor apparently popular in today’s university religion departments.  Whether or not interpretations are possible, what the religious texts actually say does matter and must be taken seriously.

Aslan doesn’t touch on this subject in his Salon essay, but he does provide a link to an interview he gave the Young Turks’ Cenk Uygur in which he skirts Uygur’s refreshingly bold questions about why he has chosen to believe in Islam, the texts of which Uygur finds “wrong.”

“If you actually do believe the [Islamic] texts,” Uygur asks, “then you’re one of the most dangerous people on the planet . . . or, you don’t believe the texts, [so] what’s the point?  Why do you” – Aslan – “choose to believe Islam, if you know the text isn’t really true?”

No matter how many times Aslan deploys such sophistry, it will not work.  Nonbelievers reject the comic-book cosmogony propounded as “sacred truth” by Judaism, Christianity, and Islam – “sacred truth” far too many in the present day are eager to die, mutilate, and kill for.  We ask, quite rightly, how reasonable people could believe it.  We dismiss as incompatible with modern life the master-slave ethos, the affirmation of slavery as an institution, the patriarchal misogyny, the wanton punitive cruelty (check out Leviticus, for example), the vile stigmatization of gays, and the shaming of the female body that permeate the religious dogma and its canon.

We understand the real purpose behind religion whenever it exceeds the bounds of conscience, as it has done throughout history, and seeps into politics.  More than two centuries ago, the English and American revolutionary Thomas Paine penned words that still ring true: “All national institutions of churches, whether Jewish, Christian or Turkish, appear to me no other than human inventions, set up to terrify and enslave mankind, and monopolize power and profit.”

Atheists, New and old, hold religion to be of human provenance and based on texts of human authorship riddled with human flaws exploitable for entirely profane purposes.  Once one ceases regarding religion as quaint myth or a source of comfort (albeit false) for those who accept it, and begins grasping the lethal force it is regaining in much of the world, alarm and outrage ensue.

In his Salon essay, Reza calls New Atheism “a reactionary phenomenon.”  He is right about that, in one sense: nonbelievers have taken to reacting vociferously against attempts of the past decades to drag us all, in the name of faith and our own good, away from secularism and the Enlightenment, and back toward a more primitive age.

Benjamin Franklin once observed that, "The way to see by Faith is to shut the eye of Reason."

We all have a choice to make – with both eyes open.