"Fox & Friends" rings in the new year as only it can, while Michele Bachmann is pretty sure she saved the economy 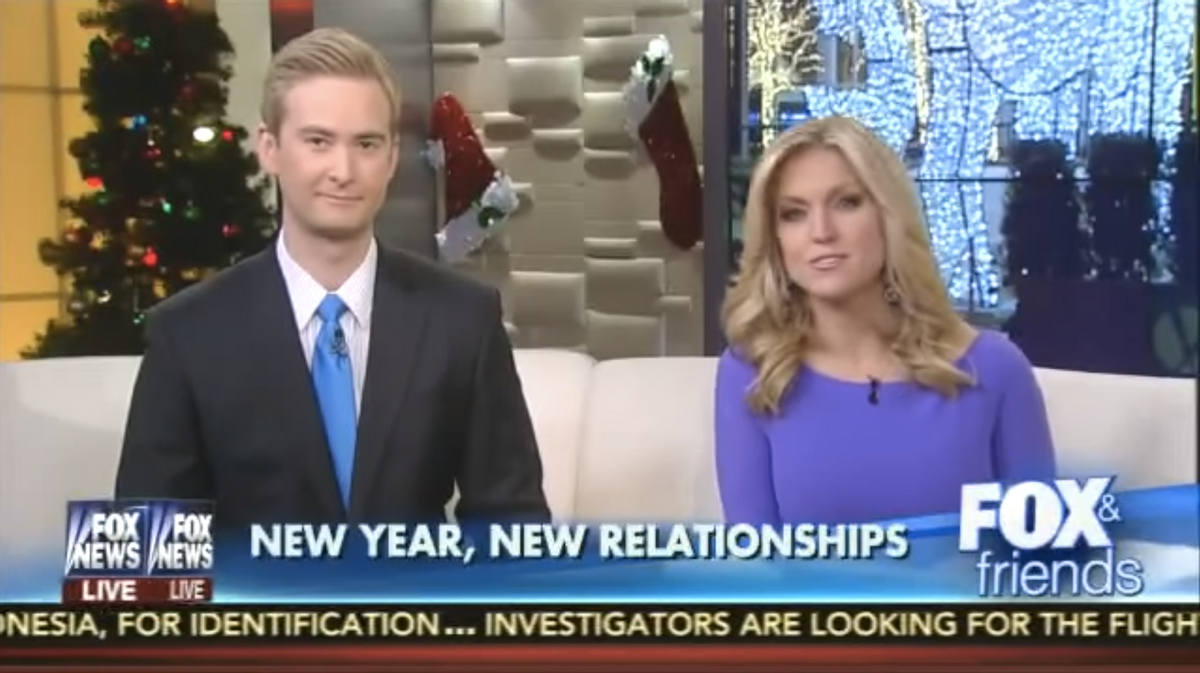 1. President Michele Bachmann delivers on one of her campaign promises.

Drivers enjoying the cheapest gasoline in years may not know this, but they have retired Congresswoman Michele Bachmann to thank for the low prices at the pump. During her awe-inspiring run for the Republican presidential nomination in 2012, Bachmann promised voters that if elected, she would bring them $2-a-gallon gasoline, and dang if she did not deliver on that campaign pledge this week.

The, how shall we say, not entirely reality-based, Bible-thumping former presidential candidate touted her accomplishment on Twitter this week, just to remind everyone.

You might wonder, did the fact that this miracle occurred under Democratic President Barack Obama cause any cognitive dissonance for Bachmann? No, it did not. Because for that, you would have to have cognition to begin with.

What would Jesus do, is a perennial question of the Christian faithful. Tea partying, rabid anti-immigrant congressman Steve King came up with a rather bizarre anwer to that question this week. King's Jesus would give speeches to white supremacist groups, apparently. King was speaking about the controversy surrounding his Republican colleague Rep. Steve Scalise after reports emerged that he spoke at a conference with close links to former Ku Klux Klan leader and white pride-espousing politician, David Duke.

In an interview, King told the Washington Post that he and other conservative lawmakers plan to stand by Scalise, who is now the No. 3 Republican in the House of Representatives. They are apparently not bothered by the revelation that Scalise gave a speech at a white nationalists conference when he was a state lawmaker in 2002. Scalise has claimed he did not really know who he was speaking to, which is odd.

Odder still is that King then suggested that consorting with white nationalists is similar to something Jesus might have done.

“Jesus dined with tax collectors and sinners,” King explained. “It’s not the healthy who need a doctor, it’s the sick. Given that piece of scripture, and understanding that Scalise probably wasn’t staffed thoroughly, I could understand how something like this happened. But I know his heart, I’ve painted houses with him post-Katrina, and I know he is a good man.”

That’s one heck of an endorsement.

3. Fox News offers absurd advice to women in honor of the New Year.

Fox & Friends offered some sage advice to the ladies on how to please their men on New Year’s day, so get out your notepad, gals.

It turns out that men like having their egos stroked, their meals cooked and their feet massaged, according to the crack experts on Fox.

“Ladies, listen up,” host Clayton Morris said. “Ladies, we’re talking to you. If you still don’t have a New Year’s resolution, then could this be it?”

Morris recommends reading a new dating guide titled Single Man, Married Man, which was written by actual men, so women can get some “honest advice on how to get a husband.”

Co-host Peter Doocy is always up for offering helpful romantic advice. “No matter where a woman was in life, she should always be able to cater to her man’s needs.”

Token woman in the discussion Ainsley Earhardt struck a blow for feminism. “Yeah, I do want to be a better wife.”

But for Doocy, this was no joking matter. He's all about helping the ladies. “When he gets his ego stroked,” he helpfully pointed out, “he’ll be more inclined to love you more.”

But that’s not the reason you should serve your man, Earhardt pointed out, just to get something in return. More inanities followed and will surely follow again.

4. Conservative economist Art Laffer offers laughable analysis of why the economy is recovering.

Pity poor Fox News. Here the economy seems to finally be recovering somewhat, and the stock market has risen for the sixth straight year and that rascal of a president of ours has the audacity to crow about it.

Obama “took a big bow,” Fox's Neil Cavuto whined on Friday. There has to be some explanation for it, other than any of his policies. The last thing any conservative brain would be able to entertain is that any sort of government stimulus might have helped, or heaven forfend, that quantitative easing was a good idea. The thought of more government spending (except on the military, of course) or eek, raising taxes on the uber-wealthy and corporations sends shivers up and down the conservative trickle-down economic spine.

Cavuto invited father-of-supply-side economics, Art Laffer, to help make sense of it, and well, frankly, he was not up to the job. After a brief moment of hilarity in which Cavuto made some crack about “midgets” and promised Laffer he was not making fun of the conservative darling’s physical stature, Laffer advanced his absurd theory. The reason the economy is recovering is because stimulus money has finally run out.

Yep, he said that. His actual words:

"The reason we're now coming out is because all of those stimulus dollars spent are now drying up and government spending as a share of GDP is falling very sharply, which is leading to a modest recovery right now, and I think it will continue and I'm very optimistic about the long term, but the reason why we're having any growth now is because of stimulus spending running off and not being there any more."

This is pretty far out of left field, even for ardent trickle-down economist Laffer. But no matter how wrong he is, he'll always have a home at Fox.

If you had any doubt that gun nuts and racists have a little something in common, consider the case of Larry Pratt. This outstanding citizen heads up Gun Owners of America, a right-wing, pro-gun group, so comfortingly, he is armed to the teeth. He offered up his sterling analysis of the root cause of racism in America this week: it’s the black people.

And not just any black people: black leftists.

Pratt made this claim during an interview with Internet hate-talk show host Stan Solomon. The two were discussing the deaths of unarmed black men Michael Brown and Eric Garner at the hands of white police officers. Pratt then spoke of the murders of two policemen in Brooklyn, which no one is celebrating.

“Let’s face it,” Pratt remarked. “The racism that we are dealing with in our country comes primarily from a small group of black leftists, and it’s almost like a repeat myself — radical leftist, racist. When you’ve said radical leftist, you’ve pretty much said racist.”

As if this were not vile enough, evil-as-hell Solomon upped the ante by suggesting that peaceful protesters should be killed, Right Wing Watch reported.

Now there’s a true patriot for you.