America's long obsession with "Downton Abbey": How the show became a satire of Britishness

The series, now airing its fifth season, has turned into an American soap opera gussied up with a British accent 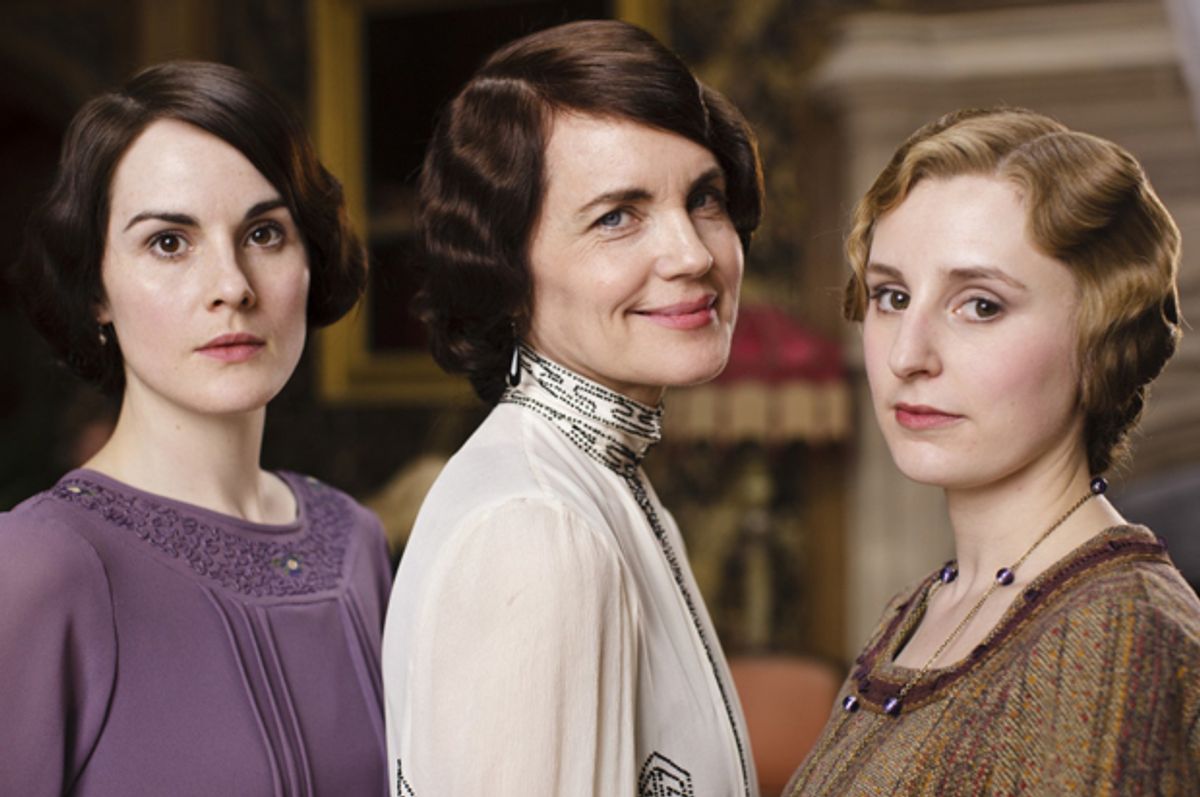 “Downton Abbey” is not even trying anymore. Why should it? It’s a worldwide hit, drawing in viewers from countries as diverse as Cambodia and Sweden with its frothy melodrama and its period costumes. It has a formula, and it sticks to it: The hapless folk belowstairs marvel over some new technology. Abovestairs, the aristocrats practice selfless noblesse oblige. One well-dressed person and another stare daggers at each other across the well-appointed dinner table. Someone’s suspected of a minor crime, and they either a) did it, but it wasn’t their fault or b) didn’t do it, but take on the yoke of martyrdom with quiet grace. Mrs. Patmore cries; Carson blusters. Someone or other throws a punch, and all the ladies present gasp. Daisy still looks 12, even though it’s been over a decade in the show’s timeline since season one. Michelle Dockery’s Lady Mary raises her eyebrows. Maggie Smith’s Lady Grantham makes a pithy, cutting remark; Penelope Wilton’s Isobel responds in kind; Smith’s eyes bulge and her head bobs, much like a chicken. And then everyone exchanges pained glances. The end! Roll credits.

Given that, aside from the minor frills of who’s wrongfully accused or what’s the modern contrivance bothering everyone this week, there’s no reason whatsoever to watch season five of “Downton Abbey.” In fact, if you, like me, enjoyed the first and maybe second seasons, watching the fifth is a painful reminder of everything the show could be and isn’t. (Mo Ryan at Huffington Post has an excellent breakdown of the show's sins and graces.) Two paths diverged in the wood, and “Downton Abbey,” despite its astonishing talent and productive values, took the path of predictable, repetitive soap opera. It happens—television shows exist to make money, and when a formula mostly works without too much effort, that’s how you get 16 seasons of “Law & Order: SVU.”

It’s losing viewers as a result—or, at least, it’s losing viewers in Britain. Because while “Downton’s" mediocrity is not that odd, what is weird is America’s continued fascination with the show. While ratings are slowly slipping for the period drama in Britain, they’re on the rise in America. And last year, “Downton” had 12 Emmy nominations, including four acting nominations and a nomination for the best drama of the year. And in the upcoming Golden Globes, this weekend, the show is nominated for best drama, next to “House of Cards,” “Game of Thrones” and “The Good Wife.” Americans are under the delusion that “Downton Abbey” is not just good but very good, a bit of cultural trickery that must make Brits feel better about the war of 1812.

To be sure, Americans seem to require a splash of medieval manners and a British accent to tolerate anything that happened in another language or in a faraway land—from “Star Wars’" Imperial commanders, who all had British accents, to Roman gladiators and emperors, such as those in “Gladiator.” It’s synonymous with snobbery and education, with “the past” and “far away.” And that’s exactly what “Downton Abbey” wants: It’s not a good show anymore, but writer and creator Julian Fellowes has hit the perfect balance of producing all the nonsense that Americans find fascinating about Brits without any of the substance or context that might make that meaningful.

“Downton Abbey” is a show in the business of producing Britishness for mostly non-British audiences—mostly American audiences, in fact. Right from season one, the show has frequently referenced the Crawley family’s distinction from their American cousins; the family is half-American, technically, which means that the characters are called upon to prove their Britishness to visitors (and the audience). The first episode’s major calamity was the Titanic’s sinking—a ship crossing from England to America. And with every quirky story, the characters are upholding and marketing, really, a particularly conservative set of British values. Service is a privilege; socialism disrupts dinner; aristocracy works for the common person’s best interest. As Emma Brockes writes in the Guardian: “One's sympathy for the Crawleys is so advanced at this stage, they could probably roast a villager over a bonfire and we'd think quite right, ungrateful serf had it coming.”

I can’t entirely recommend season five of “Downton Abbey” to you; if last night’s bonfire of the vanities of Edith’s bedroom didn’t enthrall you, the rest of the season does not offer much more in the way of interest. (Well, that’s not entirely true. In the next two episodes, a few characters actually say the word “sex” out loud, which I think is a series first. The show’s strong point has always been in finding ways to tell stories about the feminine experience in a very patriarchal world.)

But if you’re jonesing for a British fix that errs more on the side of batshit than bougie, you may want to check out ABC’s limited series “Galavant,” which is airing two episodes every Sunday this month. It’s a musical fairy tale sitcom that is outright ludicrous—a little bit “A Knight’s Tale,” a little bit “Once Upon a Time,” a little bit “The Princess Bride”—and fair warning, it is not exactly what I’d call good. “Galavant,” much like its protagonist with the same name, hopes that you, the audience, will forgive any number of production sins because you’re charmed by its self-referential wit and daring. Whether or not you are charmed is another matter. The sets and costumes deliberately evoke low-budget, middle-school Shakespeare; there is no such thing as historical accuracy, or even history, for that matter. And then there’s the absurd; during a training montage last night, the producers clearly could not acquire the rights to “Eye of the Tiger” but still wanted to use it, so they composed a near-cover, with different lyrics. “You need the heart of a lion, the power of the bear / the speed of the cobra, the neck of the giraffe / the fur of the wombat, the gerbil’s tiny feet / the fury of the duck, the passion of the otter / the fist of the hippo and the magic of the yak.”

“Galavant” is extremely silly—but at least it knows it’s silly. And while “Downton Abbey” seems to drag on and on into eternity, “Galavant’s" half-hours actually left me wanting more. Perhaps this is a case of history repeating itself first as tragedy, second as farce, but look, the farce is so much more fun to watch.