"He likes beautiful women as much as I do": Inside the latest stormcloud of sex abuse allegations

With a new crop of scandals, the line between guilt and guilt by association is up for public examination 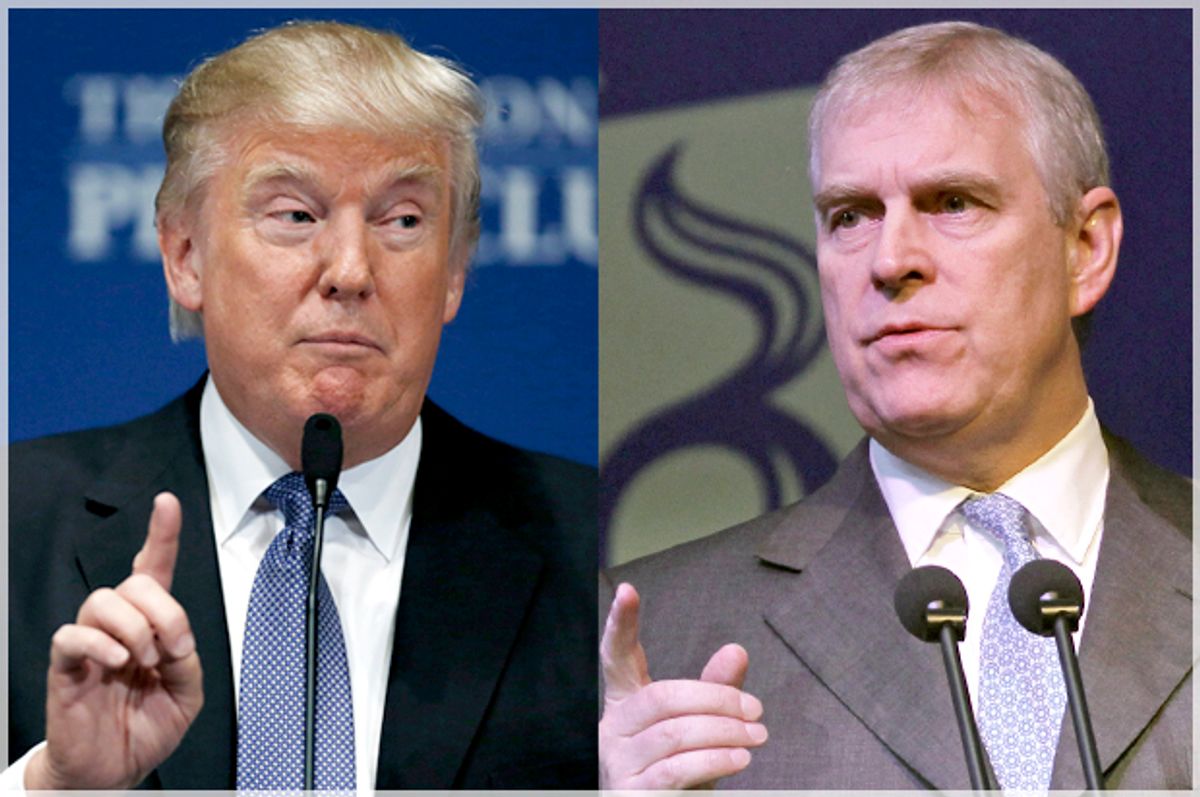 What does the company you keep say about the way you live your own moral compass? Among the things you have in common with your friends and colleagues, should the world assume that means the worst acts of one of you? It's a question a lot of people are asking lately about both Prince Andrew and attorney Alan Dershowitz.

Their former associate Jeffrey E. Epstein, a billionaire businessman, is a convicted sex offender. The record on Epstein's behavior is enough to make your skin crawl. But now that the Prince and Dershowitz have also been accused of sexual misconduct – and old pal Donald Trump's history's of friendship with him has been brought up in the press – the line between guilt and mere guilt by association is up for very public examination.

Beginning in 2008, Epstein served thirteen months for soliciting prostitution, following a lengthy Florida investigation involving allegations of "aggravated assault" of underage girls. The Palm Beach police department's 2006 affidavit included "sworn taped statements" from "five victims and seventeen witnesses" regarding unlawful sexual activity with girls, including one as young as fourteen, who were reportedly brought in to give him massages. Since then, Epstein has reached out-of-court settlements with a number of the alleged victims.

But one woman, known as Jane Doe 3, claims that she was procured for Epstein by the late mogul Robert Maxwell's daughter Ghislaine beginning when she was fifteen – and that she was used as a "sex slave" and lent out "for sex to politically connected and financially powerful people." A motion filed in Florida last week goes on to say that "One such powerful individual Epstein forced Jane Doe #3 to have sexual relations with was a member of the British royal family, Prince Andrew (aka Duke of York)." And Alan Dershowitz, who worked with Epstein while he was under investigation, is likewise named as one of the men who had sexual encounters with the girl. The documents say that Epstein ordered the now 30 year-old woman to "give the prince whatever he demanded" and "report back on the details."

Buckingham Palace, which rarely comments on allegations against the royal family, has strenuously denied the claim, saying, "This relates to longstanding and ongoing civil proceedings in the United States, to which the Duke of York is not a party. As such we would not comment on the detail. However, for the avoidance of doubt, any suggestion of impropriety with underage minors is categorically untrue." In 2011, Andrew resigned as "an ambassador for British businesses abroad" after his association with Epstein became known. That same year, Vanity Fair reported that "According to a sworn deposition by Juan Alessi, a former employee at Epstein’s Palm Beach estate, Andrew attended naked pool parties and was treated to massages by a harem of adolescent girls…. (Prince Andrew says he neither attended nor was aware of any naked pool parties.)"

The 76 year-old Dershowitz, meanwhile, has been far more vehement in his denial of any wrongdoing. He appeared on the "Today" show Monday to say, "The woman has said she wants to have a full investigation. I welcome a full investigation. I am not trying to silence her. I challenge her to repeat the statement to the press so I can sue for defamation." And he vows, "They will rue the day that they filed this."

Epstein, like a lot of men with a big bank account and deep pockets, has had a lot of friends in his time. He's hung out with Bill Clinton and Kevin Spacey. He's made donations to Eliot Spitzer and Bill Richardson – who subsequently returned the money. Several years ago, Donald Trump told New York magazine, "I've known Jeff for fifteen years. Terrific guy. He's a lot of fun to be with. It is even said that he likes beautiful women as much as I do, and many of them are on the younger side. No doubt about it -- Jeffrey enjoys his social life." What a nice way of putting it. A 2003 Vanity Fair profile of Epstein similarly noted, "There are many women in his life, mostly young, but there is no one of them to whom he has been able to commit…. Epstein is known about town as a man who loves women — lots of them, mostly young. Model types have been heard saying they are full of gratitude to Epstein for flying them around, and he is a familiar face to many of the Victoria’s Secret girls." In a 2007 New York feature on Epstein's troubles, writer Michael Wolff observed, "He has never been secretive about the girls. At one point, when his troubles began, he was talking to me and said, 'What can I say, I like young girls.' I said, ‘Maybe you should say, 'I like young women.'"

With the distance of time and a lack thus far of other accusers or witnesses, the likelihood of Jane Doe 3's case advancing – or it having any profound impact on either the Duke of York or Mr. Dershowitz – is pretty slim. But what the past decade of fawning magazine articles -- followed by investigation and lawsuits and jail time for Epstein -- should reveal is that his taste in females was very well known to his well-connected social circle. Whether his pals participated in his activities is not known, and certainly befriending a person is not the same as sharing in his crimes. But there does seem to be a pretty public history with very young girls, a history you have to wonder why no one seems to have ever questioned or raised a red flag about. In 2010, the Daily Beast reported that police found "large, framed photos of nude young girls" decorating his house. That's not the behavior of a mere hedonistic playboy. That's deeply troubling behavior, and openly so. Behavior his wide circle seems at best to have chosen to be oblivious to. Because Jeffrey Epstein, unlike, it would appear, the girls in his life, had a lot of powerful friends to protect him.