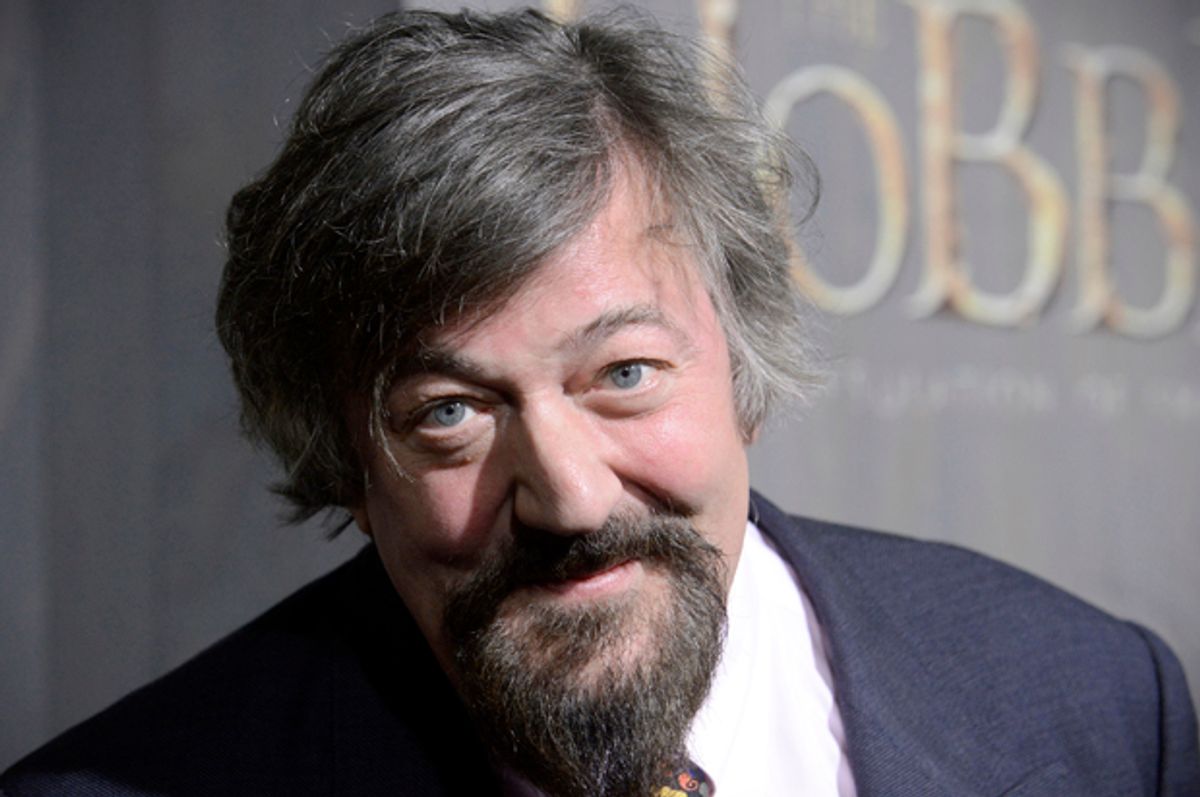 This is progress for you, 2015 style. A famous man who announces his engagement – to another man – need not fear he'll be mocked or criticized or questioned for the gender of his intended spouse. Instead, he can just be picked on for the age of him. So congratulations to Stephen Fry and Elliott Spencer, also known as Fry's "toyboy."

It's a glowing testament to how far we've come to remember that a generation ago, a public announcement of two men getting legally married would have been not just impossible in most places in the world, it would have been all but unfathomable. In the UK only one year ago, such a marriage would not have been attainable. But thanks to the legalization of marriage equality in England and Wales last spring and in Scotland in December there's been a veritable wedding boom, with thousands of same-sex couples tying the knot. Last month, twelve years after their civil union, Elton John and David Furnish were among them.

Now, the 57 year-old Fry is doing the same, sharing on Twitter that "Oh. It looks as though a certain cat is out of a certain bag. I’m very very happy of course but had hoped for a private wedding. Fat chance!" and adding soon after "Thank you all SO much for your kind congratulations. Deeply touched."

Yet amidst the flurry of congratulations, there's also been a deluge of mentions of the age gap between Fry and his 27 year-old fiancé. It's understandable that in reporting on a major life event for public figures, their ages would be noted. And when the difference is a matter of decades, sure, one can see how the May-December aspect of the romance would be noted. It certainly seems to have come up every time anybody ever wrote a word about the marriage of Demi Moore and Ashton Kutcher, though it doesn't seem to come up as much at all when discussing Matthew McConaughey and Camila Alves. But I still have to question the prurient, judgmental tone of headlines that blare "Stephen Fry confirms he's set to marry his 'toy boy lover'" or that "Stephen Fry set to marry toyboy lover who is 30 years his junior," or even that "Who is Elliott Spencer? Stephen Fry prepares to marry comic 30 years his junior." And by the same token, by the way, women – even young ones – aren't "trophies."

To much of the world, Fry isn't just a beloved actor and comic, he's an inspiration. He's been an outspoken advocate for gay and lesbian rights for much of his career, as well as a bold voice for educating the public about mental health issues. He's been candid about his struggles with bipolar disorder, particularly with his brave  admission of his suicide attempts -- including a recent one in 2012. He said at the time, "My role, as I see it, is not to be shy and to be forthcoming about the morbidity and genuine nature of the likelihood of death amongst people with certain mood disorders." The most important thing about him, even on the day he announces his engagement, is not the age of his partner. And if you're wondering who Elliott Spencer is, I can assure you this much – he's not a toyboy. Grown men in their late twenties are not toys. He's a person who fell in love with another person, and the age difference between them doesn't make it any less real. To fall in love and be loved in return is a miracle. To fall in love after suicidal depression has nearly claimed your partner, to have the right to marry the person of your choosing – these are miracles too. It's nothing to toy with. It's just to celebrate.