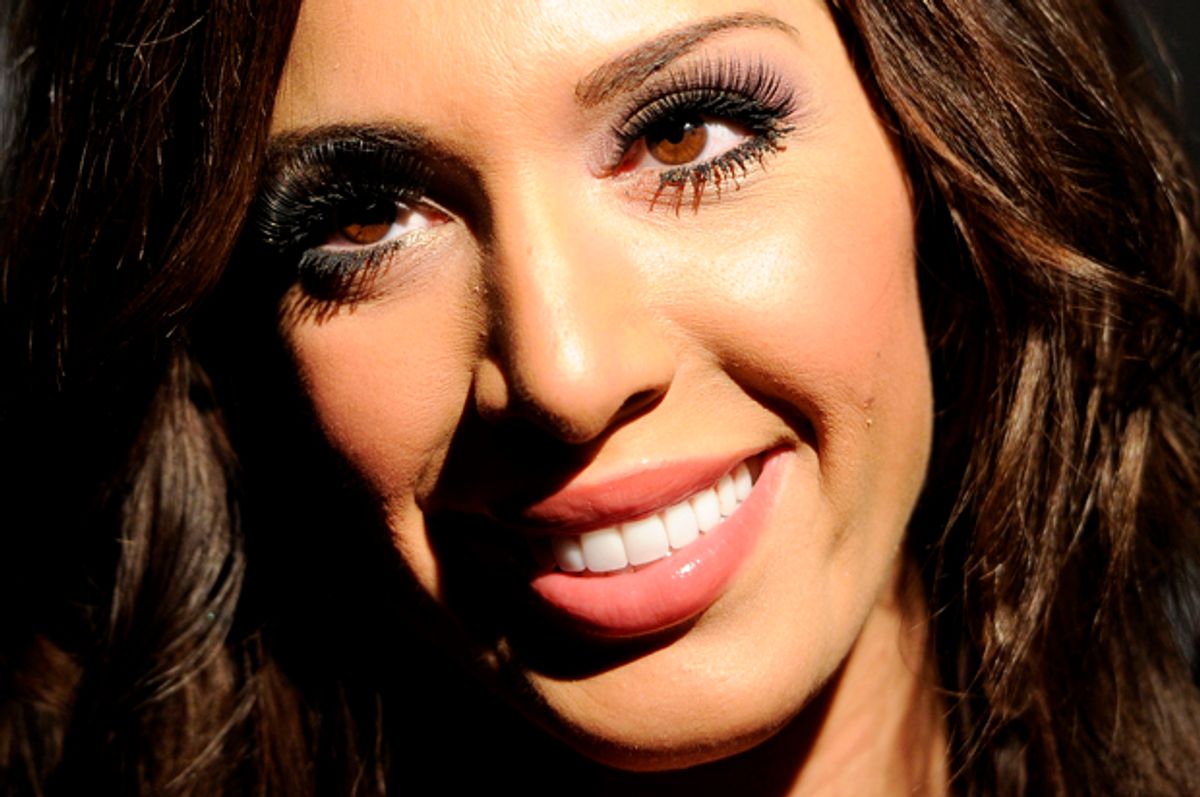 They say if you can't be a good example, at least try to be a dire warning. Farrah Abraham proves you can be both.

On Tuesday, the "16 and Pregnant" and "Teen Mom" reality star, stripper, sex tape performer and New York Times bestselling author sent out a photo of herself on social media with the message "Gotta love my new look." In it, she's ponytailed and in profile – and shown next to a picture of "Futurama's" Leela. The resemblance, thanks to a horribly botched exercise in lip plumping, is uncanny. Other photos show the extent of damage from the procedure, which she reportedly believes was an allergic reaction to the anesthetic – an upper lip grotesquely swollen, a face now utterly out of proportion. She writes, "Girlfriends don't say I didn't warn ya! #BOTCHED California #ER #fixit."

It surely takes a fair degree of self-absorption to go ahead and post a bunch of selfies when one is looking so completely out of whack – a little like the gross trend of "Look at my disgusting wound!" selfies – and Abraham's entire career is certainly dotted with ill-advised attention-getting moves. She's been more than open in the past about her other procedures, including a nose job, chin implant and two breast augmentations. But there's also something weirdly likeable about a woman who's willing to share the ridiculous, humblingly awful results of an attempt to look better.

Cosmetic enhancement is a simple fact of the lives of plenty of people in the public eye – not just TV stars but athletes and politicians as well -- but their transformations usually come with implausible denials and insistences that they're just very well rested. When a star appears looking suddenly and dramatically different, the expectation is generally that it is not to be commented on. (For this and many other reasons, we miss you and your candor, Joan Rivers.) But the blatantly extreme measures that some people will go to has created its own little side industry – the lurid, "OMG what did she do to herself?" industrial gossip complex. Our culture constantly chastises people for growing older, for gaining weight – yet the public fascination with normal then and now progression is nothing to the outright horror of a once familiar face rendered waxen and unrecognizable.

By putting herself out there with her mangled face first, before some tabloid site could snark on her unfortunate new kisser, Abraham hasn't just taken control of the inevitable spin – she's made it okay to laugh about it. She's said, yes, I literally look like a cartoon mutant creature. Good for her. Though not many of us might venture to get our lips augmented, we all are vulnerable to the lure of presenting our most appealing versions of ourselves. We all want the world to see us at our best – even if one person's version of "best" is another's "yikes." And we all fall short, with remarkable consistency and frequency. We miss the note, we have the bad hair day. And when it happens, we can hide, or we can try to respond with a little self-deprecation and humor. We can deal with it with -- if our faces are still capable -- a smile. We can try to not take ourselves and our vanities too seriously. We can try, believe it not, to learn a little something from Farrah Abraham.