We all agree that "racism" is immoral -- that's not the argument. The problem is how too many redefine the word 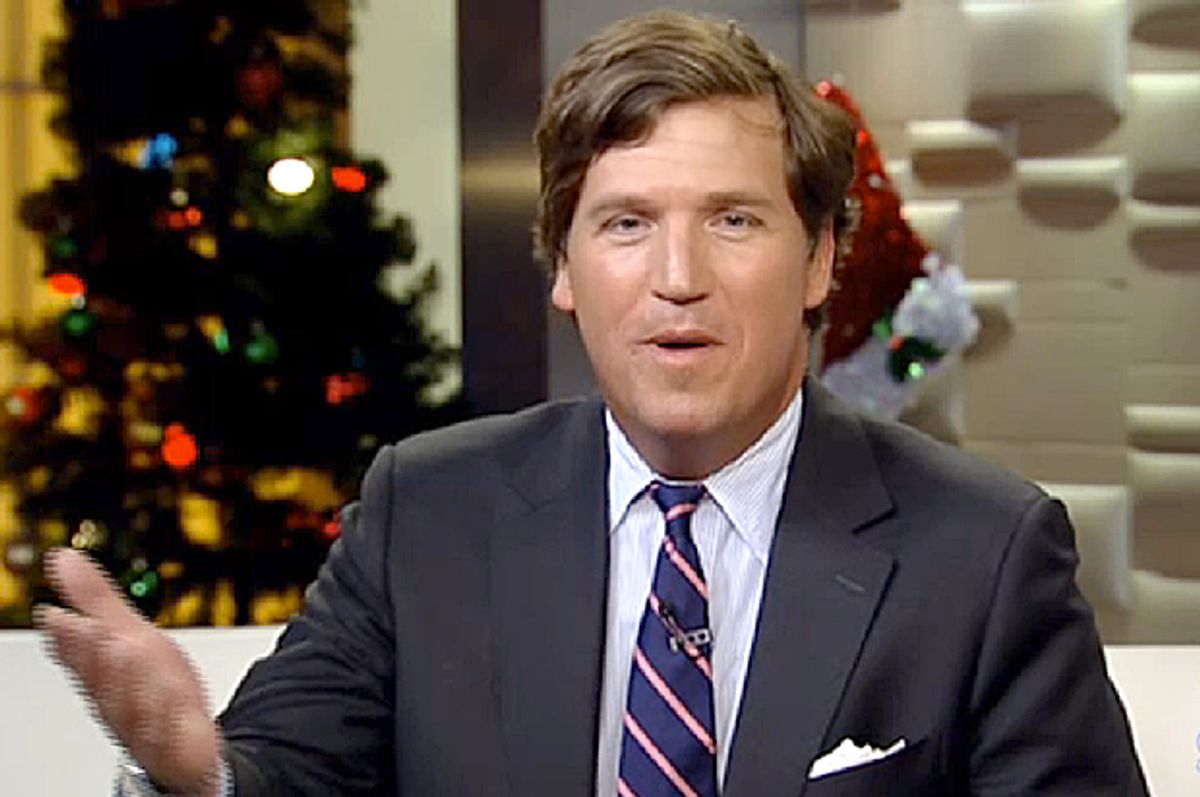 If we hope in 2015 to make any changes that will shift the dismal trajectory of our national record on race, perhaps we should begin by clarifying a definition of racism that is not so utterly elementary and reactionary as that which Tucker Carlson offered recently on "Fox and Friends." Tucker Carlson defines white privilege as “attacking people based on their skin color.” He further says, “That’s not moral. It’s wrong. And it shouldn’t be allowed.” That racism is immoral and wrong is a fact on which we can agree.

But our agreements stop here. Have any of you ever heard any person say racism is right?

I haven’t. Even the most strident white supremacist won’t argue that“racism is right.”  Our national issue is not about the rightness of racism. It is about the fact that we actually care more about not being called racist, than about not being racist. And in the land of Tucker Carlson, a land that far too many white people inhabit, racism refers to the act of calling out systems of white supremacy and acts of white privilege. For white people who believe this is the definition of racism, they are really saying that racism is anything that makes white people feel bad about being white. Racism is anything that makes white people aware of all the ways that whiteness shapes their movement through space.

For white people, to be called out for white privilege is to have to grapple with the possible notion that you are implicated in systems of white supremacy even if you don’t hate people of color and even when you aren’t trying to be.  If white privilege exists, that means white people have to grapple with the fact that the potentially negative impacts of their whiteness under a regime of white supremacy will always exceed the best of their anti-racist intentions.

Since this is the time of year when people set their intentions for moving forward in the New Year, I think it is important to apply one of those fluffy self-help truths to this moment.  I think most people intend to be anti-racist. Just like we intend at the beginning of each year to lose weight, be healthier, save more money and generally be better people. But old habits die hard. If you are anything like me, each December you step on the scale and realize that the results of your unhealthy actions far outweigh your healthy intentions. This is why I have stopped making New Year’s resolutions. I always feel like I’m setting myself up for failure.

And we collectively set ourselves up for failure when we continue in the old, outmoded belief that racism is solely defined by a conscious, malicious disregard for another group of people based on skin color. In a piece at the New York Times, professor Sendhil Mullainathan of Harvard outlined  the myriad ways that people of color experience racial disparities because of implicit bias.

Among the examples of note that he gave about the material impact of implicit (not explicit) bias were that physicians were much less likely to recommend cardiac catheterization to black heart patients than they were to white heart patients, “even when medical files were statistically identical”; when bargaining for used cars black people were on average offered prices at $700 higher and received smaller concessions than white buyers; when iPods were auctioned on eBay, an ad showing a white hand received 21 more offers than an ad showing a black hand. A 2009 study found that black job applicants with no criminal record were offered jobs at rates as low as white applicants with criminal records.  There have been similar results of racial disparity when comparing white and black applicants looking for housing, white and black citizens emailing and hoping to receive replies from Congresspeople, and of course, racial disparities are rife in the criminal justice system. In every area of American life, from business to commerce to education to healthcare to criminal justice, we can see broad evidence of racial disparity. In his classic book, "Racism Without Racists," Eduardo Bonilla Silva calls this phenomenon,  in which racial disparity persists, though little evidence of explicit racial bias is apparent,  “colorblind racism.”

If you believe that you don’t have implicit forms of bias, take the Harvard implicit racial bias quiz. When I took the quiz, to my utter horror, I discovered that I was statistically biased toward white people. That is true for the vast majority of people who take the quiz despite their race. To have to grapple with the fact that my own subconscious inclinations, despite a significant amount of racial pride and educational expertise in black culture, is toward white people remains difficult, because this means at some level, that white supremacy makes me distrust people who look like me. Good intentions alone are simply insufficient to challenge a system so vast as white supremacy.

Recognizing that racism is not primarily about our intent matters as we move into 2015, a year in which young people will continue to demand a national solution to racialized police brutality. Until we can stop looking for explicit racial animus, and start asking questions about the implicit forms of bias that shape the way all police officers patrol and police communities of color, the bodies will continue to pile up.  And white people’s brunches will continue to be disrupted.

Racism is more complicated and more pervasive than domestic terrorists covered in white sheets using the N-word. Racism is more complicated than your grandparents’ use of racial slurs. Racism is more complicated than whether any given person is “a good person.” Even Leigh Ann Tuohy, the good white lady who took in and raised a homeless black boy and was portrayed by Sandra Bullock in “The Blind Side,” is not immune to assuming the worst about young black men.  Acknowledging complicity is not the same thing as acknowledging intent. Acknowledging complicity is about acknowledging that you thrive in this system because your ancestors built and structured this world for you to thrive. As an isolated fact, this is not a bad thing. But in the broader context in which your ancestors also structured a world so that only white people would thrive, acknowledging complicity is an affirmation that you no longer want to compete in a rigged race.  But such assertions make the vast majority of white people uncomfortable to the point of defensiveness.  What would happen if white people moved past the defensiveness and became eager about joining together with people of color to eradicate these systems?

If, like me, the results of your implicit bias quiz have you feeling overwhelmed, and have you feeling like ending racism is too big a goal, too elusive a goal, then let’s try this. Even though I am skeptical of New Year’s resolutions, I always feel like an underachiever when I watch my friends make them, while I, being slightly contrary, refuse. But a friend shared this post that encourages us to focus not so much on goals but on systems. In the fight for racial justice, I think the broader lesson applies. If we want to see an end to racism, we have to change – or even overhaul-- the system. The deaths of every victim from Eric Garner to Tanisha Anderson to NYPD Officers Liu and Ramos are severe symptoms of a system that does not well serve those of us who love justice.

You can’t escape complicity. But you can – as we all can—set new intentions and do our damnedest to bring them to fruition. Let’s set new intentions, put in place new, more constructive systems that are not beholden to our intentions, and commit to act on behalf of justice, for others and ourselves. I believe this will work in my battle with weight loss. And I believe it will work in our battle with white supremacy, too.