"They're not based in science": Why GOP's already pulling a post-election bait-and-switch

Republicans scrambled to avoid the subject of women's health during the midterms. Here's why it was all a farce 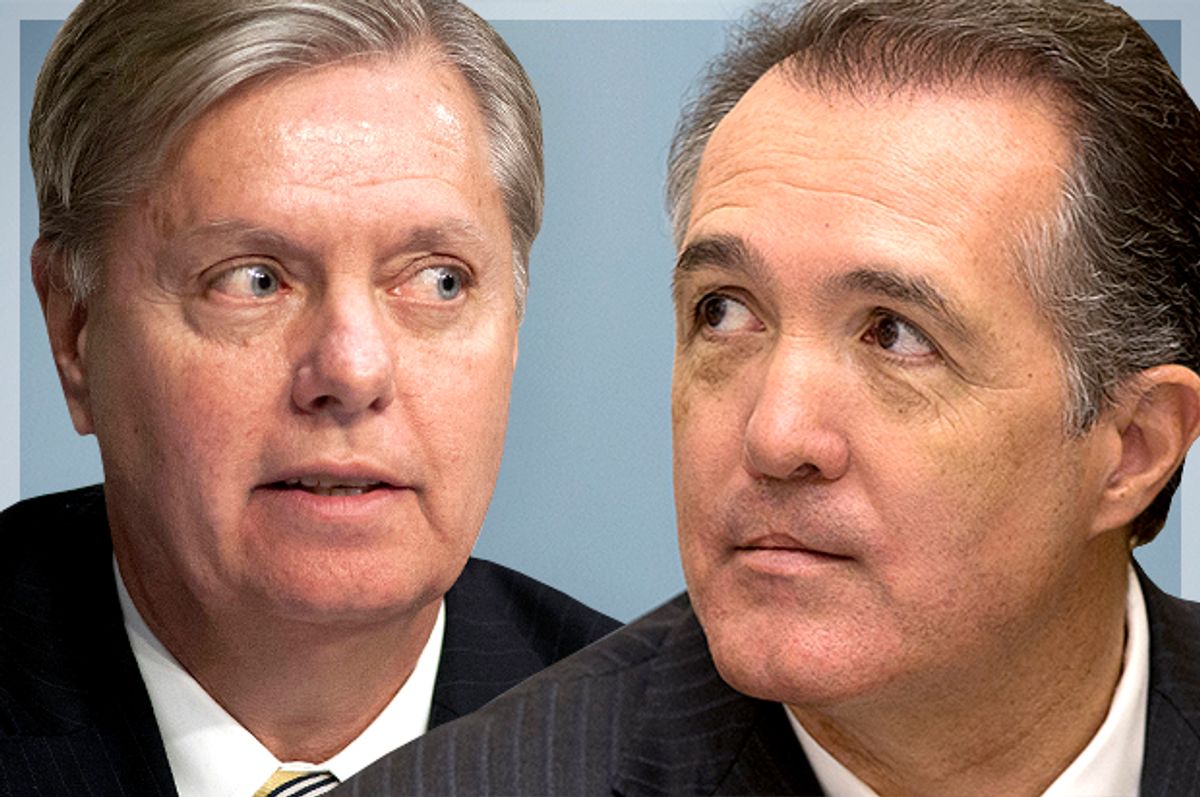 Welcome to the 114th Congress, everybody. Now please enjoy this sweeping and unconstitutional abortion ban that no one asked for. Arizona Rep. Trent Franks and Tennessee Rep. Marsha Blackburn wasted no time in introducing a measure that would restrict most abortions after 20 weeks, announcing the bill on the very first day of the new session. And South Carolina Sen. Lindsey Graham has indicated that he’ll introduce a version in the Senate in the coming weeks. The issue, it seems, is a high priority for the GOP.

But if the timing and apparent urgency behind the move strikes you as odd, it’s probably because you would have been hard-pressed to find a voter during the 2014 midterms who would have put such a ban at the top of their list of priorities. In fact, Republicans, responding to this, spent much of the last election cycle artfully dodging questions about reproductive freedom by relying on stock response about a focus on jobs and the economy or pretending to really love over-the-counter birth control. Instead of a response to voter demand, the push to ban abortion at 20 weeks is just the GOP’s latest attempt to pull a fast one on the American public, advancing an agenda that their constituents didn’t sign off on and has nothing to do with the most pressing issues they’re facing.

A few things to put the measure into some greater context. Restrictions on abortion at 20 weeks are a very specific animal. While polls show that some voters view them as moderate, such laws ban the procedure pre-viability, in direct violation of Roe v. Wade. Lawmakers like Franks know this. It’s kind of the whole point. Abortions after 20 weeks only account for 1.5 percent of abortions performed each year. But the idea isn’t just to prevent those women from accessing necessary care, it’s to open Roe up to scrutiny in hopes of getting it back before the Supreme Court. That’s an extreme agenda, and one that a majority of Americans don’t support.

Nearly 70 percent of Americans want to see Roe left alone from the kind of meddling that Franks and Blackburn are pushing right now. The same Pew Research poll found that more than half of Americans think abortion is “not that important compared to other issues.” Despite this, Franks put it on the agenda on day one.

Second, the entire basis of the proposal is a fiction. There’s really no other way to say it. Just as they’ve done before, Republicans are hoping that they can use emotional language and bad science to restrict women’s access to basic healthcare. The GOP has been waiting, for some time now, to have its next “partial birth” abortion moment, and it's banking that “fetal pain” will be it. On Tuesday, Franks said that fetuses at 20 weeks “can not only feel pain, but … can survive outside of the womb in most cases.”

But as I’ve written before, there is no credible medical evidence to support Franks’ claim about fetal pain. The limited research that anti-choice activists and politicians have used to support the idea has been refuted by the Journal of the American Medical Association and the British Royal College of Obstetricians and Gynecologists, as well as researchers at Harvard University and the University College London. But that hasn’t stopped politicians like Franks, who was a businessman before he got into politics and has zero experience in medicine, from playing the role of expert.

But when I asked Anne Davis, a second-trimester abortion provider, associate professor of clinical obstetrics and gynecology at Columbia University Medical Center, and consulting medical director at Physicians for Reproductive Health about the concept of pain at 20 weeks, she was clear about the medical consensus, which hasn't changed since we last spoke:

That’s just where the science is. You can have an opinion about that, but it doesn’t change the information. Science is not going to get the brain to connect faster.

Now there is nothing particularly unusual about two antiabortion politicians introducing a piece of antiabortion legislation. But the about-face the party is pulling after months of trying to appeal to Americans’ moderate sensibilities on the issue should upset the very voters who turned out in November. Because this isn’t what they turned out for.

And while Franks and Graham may see the 20-week ban as a blunt instrument that can be used to dismantle Roe, despite what their constituents want, doctors like Davis know these bans have a very real impact on the care their patients need.

“Patients are now asking me about fetal pain. This was not happening 15 years ago,” Davis explained to me back in 2013, when Franks introduced, and the House passed, identical legislation. “When you’re sitting in your office with a woman who is 22 weeks into a pregnancy with a severe fetal anomaly — she’s depressed, she’s stressed and now she’s worried, ‘Is my baby going to feel pain?’ It’s just another thing these women have to struggle with. And why? These are created concerns. They are not based in science, they are based in politics.

“Real situations in real life are very different than what we’re hearing from politicians,” she said.