Bill Cosby should never be off limits: How Tina Fey and Amy Poehler showed us how to tell a rape joke 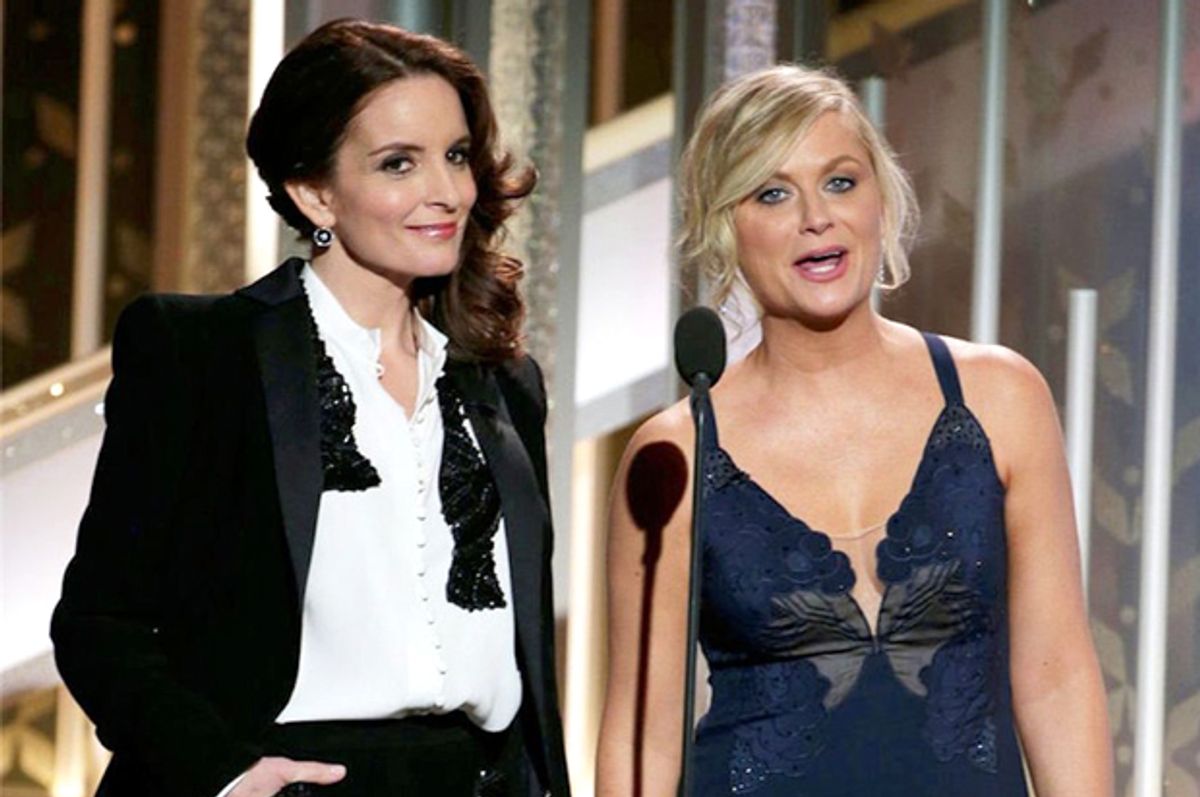 You might have heard already that Tina Fey and Amy Poehler "went there" at the Golden Globes on Sunday -- that they pulled no punches when it came to the sexual assault accusations against Bill Cosby, that they poked fun at the comedian's alleged history of drugging and raping nearly two dozen women. It was a good and uncomfortable move. As my colleague Sonia Saraiya noted, the jokes were "bold, brash, and refreshingly on-the-nose," arguably the only way of handling such a sensitive topic in the first ten minutes of a Hollywood awards show. Ultimately, though, Fey and Poehler didn't have to bring up the Cosby allegations at all; judging from the audience's uncomfortable response, people might have been more comfortable if they hadn't.

And that's exactly why the jokes were necessary, even if they weren't Fey or Poehler's best. Mimicking Cosby's voice isn't exactly the most original humor, but the way the hosts turned the embattled star into a punchline -- instead of the women who have accused him of assault -- marks a fresh approach to the grotesque un-funniness of violence against women. It's similar to the approach comedian Hannibal Buress took when he brought the decades-old Cosby rape allegations back into the public eye at the end of last year -- by making a rape joke that doesn't joke about rape.

To be sure, Fey and Poehler stood on stage and made not just one, but a series of rape jokes at the Golden Globes. And they managed to be both refreshing and transgressive in joking about something that's all too often joked about in the wrong way. Theirs was a good example of how to tell an acceptable rape joke, using a pretty simple formula: make fun of rapist, not rape victim. Whether or not the jokes were funny, in this case, isn't what marks their value. The fact that we are all discussing the jokes is what marks their value; the audience's overwhelming "oooooh" in response shows us the need for them.

The general pearl-clutching that followed Poehler's "Sleeping Beauty" punchline gets right to the heart of what gives wisecracks the potential to be so subversive. Intentionally mean-spirited jokes at the expense of a powerful man who, until recently, managed to maintain an untarnished legacy aren't the norm. Even less normal? Making those jokes while people are still trying to protect and defend that legacy, trying to make the whole thing go away. The audience's reaction fit ironically into an evening marked by celebrities showing solidarity with the victims of the Charlie Hebdo massacre, ostensibly supporting the power of humor to highlight the problems of our world. Wasn't that exactly what Fey and Poehler were doing?

And while their jokes might reach a wider audience, Fey and Poehler aren't the only ones who can successfully satirize something awful. The funniest comedians set the standard for what we're willing to laugh at, but then we continue to joke about those topics. If Tina Fey and Amy Poehler make fun of Bill Cosby -- if they manage to tell us that rape is not funny by making us laugh -- then we'll start to see the humor of the situation a little differently. It certainly couldn't be too soon for that.