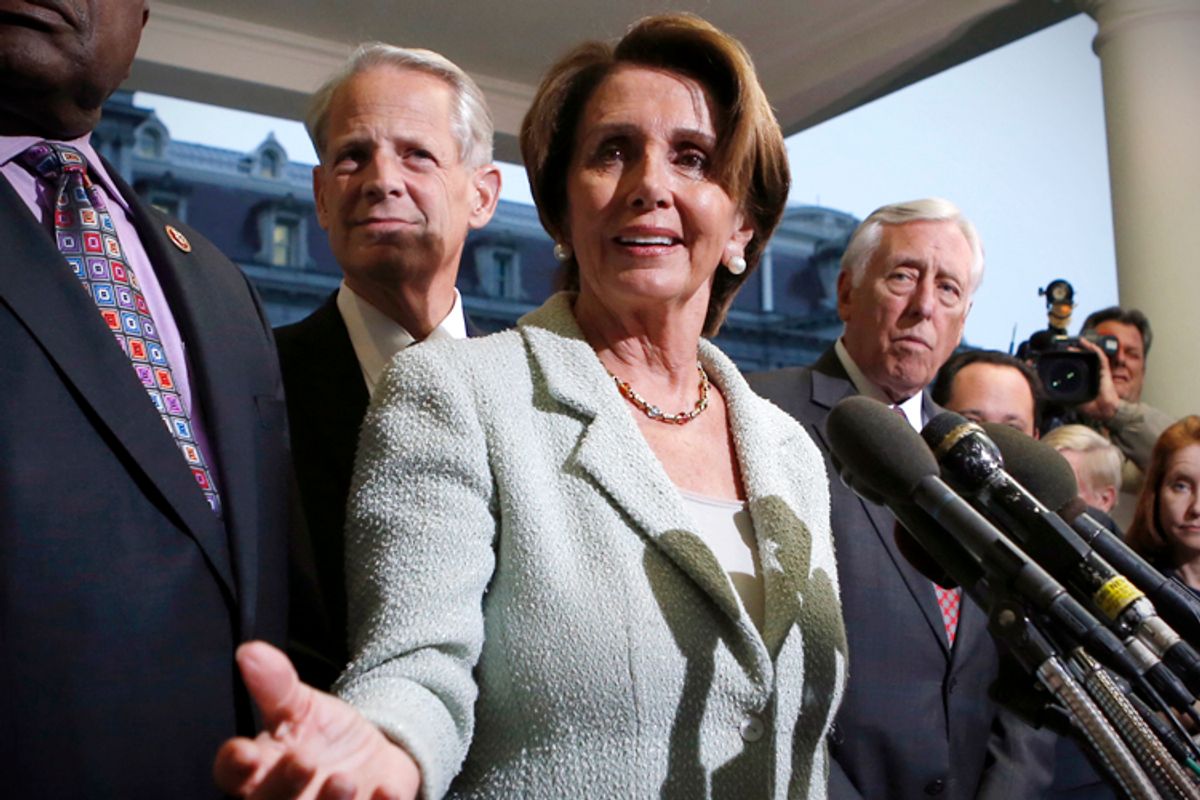 I know that beggars can’t be choosers, and that ours is a time when economic liberalism shuffles meekly through the halls of Capitol Hill, rattling a soda can full of pennies and asking for a helping hand. Still, I have to say, this Washington Post report on the Democrats’ new plan to win back America’s anxious and shrinking middle class is less than I would hope. Don’t get me wrong: the policy changes being recommended here would be a marked improvement over the status quo. But if the plan that House Minority Leader Nancy Pelosi described as “new and fresh” represents a step forward for the party, it’s also at least a half-step back. Because although the plan is more straightforwardly redistributionist than the Democrats’ have been in years — which, in the age of inequality, is now smart politics as well as good policy — it would simultaneously entrench one of the biggest conceptual roadblocks to greater equality in the U.S., the so-called submerged state.

Before we get into the submerged state, though, let’s take a closer look at the general outline of the Dems’ plan laid out in the Post’s report. According to the article, the “centerpiece” of the new plan will be a “paycheck bonus credit,” which would give couples bringing home less than $200,000 per-year a $2,000 tax cut. In addition, the Post says, Democrats will recommend beefing up the childcare tax credit as much as three times over, will “reward” those who save $500 per-year and will “prod” employers to pay better wages. But considering how Washington is essentially a company town, with the company in this case being Wall Street, the part of the Dems’ outline likely to garner the most attention is the way it proposes to fund all of these new initiatives, which the post says will amount to as much as $1.2 trillion over a decade: with a significant tax hike on the 1 percent.

“This is a plan to help tackle the challenge of our times,” Maryland Rep. Chris Van Hollen, who is the House Democrats’ point-man on economic policy, told the Post. He went on to describe it as a framework for making sure that America’s now-growing economy “works for all Americans, not just the wealthy few.” Pelosi was similarly in full saleswoman-mode, telling the Post the plan showed that Democrats understood the “challenge” of economic inequality requires them to “think big … think forward, and … think new.” And even if that kind of corporate newspeak rankles, you can’t really fault the two of them for superficiality once you remember that, as the Post rightly notes, unified GOP control of Congress makes the proposal a legislative nonstarter, and that the purpose of the grand new unveiling is more to “shape a new Democratic agenda” for whoever wins the party’s nomination in 2016.

As I said at the beginning, the Dems’ new policies — or rather their new policy goals, since the whole thing is at this point understandably thin — are not bad, in and of themselves. With wages stagnant to falling, the vast majority of the people who’d get these tax cuts could really use them, and there’s reason to believe most of the recipients would put their savings right back into the economy instead of hiding them away in their mattress. Moreover, it’s politically smart to center much of the proposal on a bigger child care tax credit, which has much more support among conservative wonks and wonk-wannabes (and the general public) than redistributionist plans that are harder to depict as being pro-family. In a vacuum, then, there’s plenty here for a liberal to like.

But here’s the problem: Because the plan is so obviously not going to anywhere anytime soon, because it’s so clearly designed to frame the debate over inequality and combat the eventual GOP nominee’s inevitable call to balance the playing field by cutting taxes on the rich, and because it’s more about signaling to voters whose side Democrats are on, the decision to embrace change via technocratic tweaking has real drawbacks. And this is where the “submerged state” comes in. Contrary to how it sounds, the submerged state theory has little to do with submarines. Instead, it’s a way to describe progressive reformers’ habit over the past few decades to embrace policies that redistribute through “submerged” changes — like tweaking the tax code or privatizing social services — that are harder to demonize as “big government” and thus more likely to make it to the president’s desk.

As Cornell’s Suzanne Mettler, who coined the term, explained in a 2011 op-ed for the New York Times, while the submerged state model has had many policy successes, it’s been something of a political failure because it’s made it easier for conservatives to ignore government’s benefits while railing against its costs. The submerged state, Mettler writes, “is largely invisible” to many Americans, who, through no fault of their own, don’t realize its affects. The home-mortgage-interest deduction, the exemption from taxes of employer-provided health and retirement plans, and various tax credits all help keep the American middle class afloat. But like water for fish, these government actions are so inconspicuous, most voters don’t know they exist. “The submerged state obscures the role of government and exaggerates that of the market,” Mettler writes. “It leaves citizens unaware of the source of programs and unable to form meaningful opinions about them.”

Needless to say, launching a campaign to educate the public about the submerged state is not enticing to Democratic politicians, who are more concerned with short-term initiatives — like winning their next election — than they are with long-term initiatives like changing the way Americans think about the state. Indeed, absent context and/or specification, most Americans will still tell pollsters that they they’d like to pay lower taxes, even if that meant government would have to do less and less. But as the Obamacare example should show us, the submerged state has a major influence on American politics; imagine how much easier of a sell universal health reform would be if voters did not reflexively fear big government, and if Democrats didn’t have to defend a plan that requires voters to fork over their hard-earned money to insurance companies that they hate.

So, by all means, give House Democrats credit for being willing, more than they have in quite some time, to argue straightforwardly for redistribution. That’s a real step forward, even if it’s symbolic and more tepid than I’d like. At the same time, though, keep in mind the ways that the submerged state distorts our politics and hides information from the voters who need it. Policy geeks and especially technocratic politicians have long been having a debate more sophisticated and realistic than the usual argument over “small” and “big” government. It’s past time they let voters do the same.