Mitt's bizarre logic: I should run because Jeb Bush is too much like Mitt Romney to win

The '12 nominee is considering running himself because Democrats will attack Jeb Bush's private equity career. Huh? 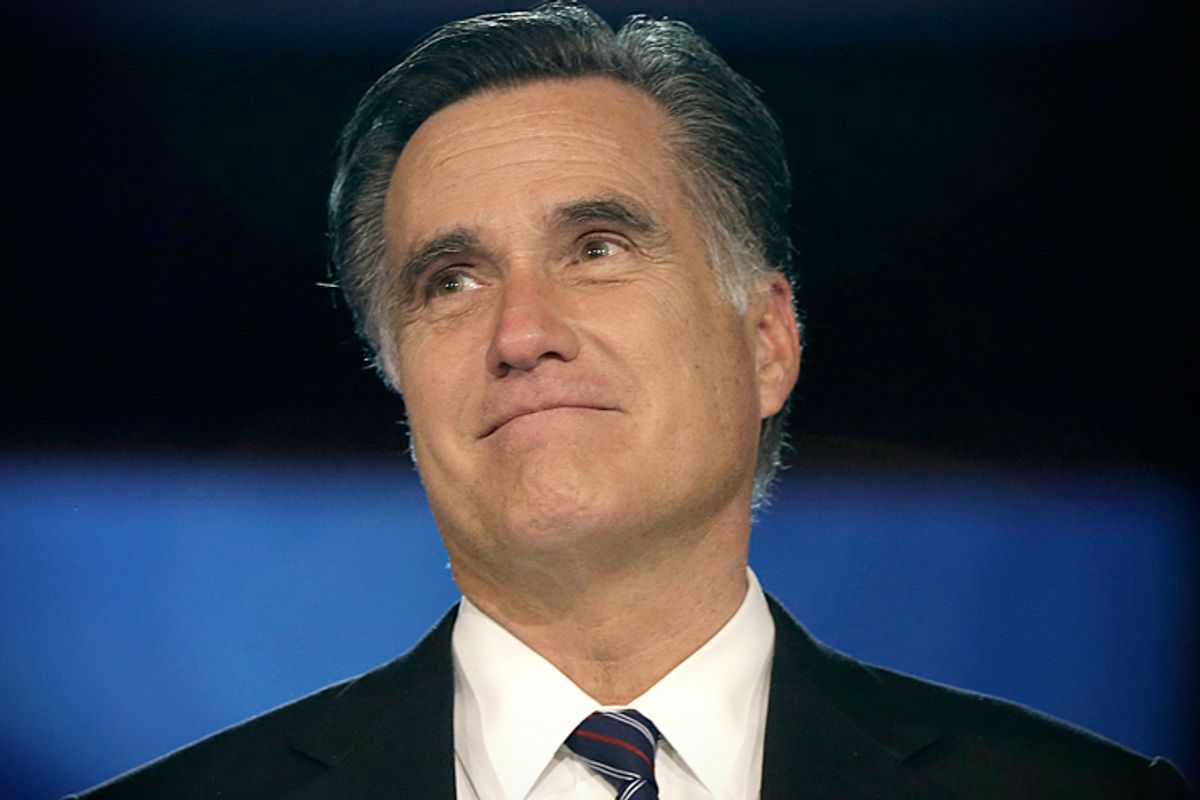 Much to everyone's delight, Mitt Romney is considering another run for the presidency. Or so he told establishment donors on Friday in a desperate attempt to stay relevant in the critical "invisible primary" that's well underway.

The reason that Mitt Romney is considering another run is that Mitt Romney really, really wants to be president. Perhaps you've noticed, over the years? But this doesn't work as a public rationale. It's sounds too self-serving, and it "sounds" that way because it is. So Romney and his people are spreading to political reporters another, more subtly self-aggrandizing rationale: that Jeb Bush, that other titan who's looking to close down the big-business establishment slot, wouldn't survive a general election.

Some of the major concerns for Jeb Bush's primary and general election viability will look familiar: they're a lot like Mitt Romney's. He's either held or holds certain heterodox positions that won't go over well with the conservative base as he tries to win the party nomination. And in the general election, his post-gubernatorial work in the private equity and Wall Street spheres will provide easy targets for Democratic messaging.

It's Romney's own people who are whispering about each of these areas of concern. Here's how Politico puts it:

But Romney has privately been critical of Bush in conversations with some supporters, saying he believes the former Florida governor will be vulnerable to the same kind of populist attack that Democrats used so successfully in 2012. Bush has been involved in a range of business ventures since leaving public office, including real estate and private equity.

Bloomberg describes it in much the same way:

[Romney's] also warned that Bush, who spent his post-office years working on a range of business ventures, could be open to the same type of private equity attacks that Democrats successfully leveraged against Romney in the 2012 race.

These are valid questions to ask about Bush's hopes against the infamous Democratic Party Class Warfare Machine. (How much they'd be canceled out by Hillary Clinton's own close ties to Wall Street is another question.) Most outside observers would raise the same concerns.

But is there any self-awareness among Romney and his loyalists at all? They are not outside observers here. They're saying "Jeb Bush may be too much like Mitt Romney to win a general election" as a rationale for why Mitt Romney himself should run. These discussions must be fascinating.

ROMNEY: Good golly miss Molly, Jeb Bush had a private equity career and thinks he can be president? Terrific! Did he not pay attention to the 2012 presidential election at all?

ROMNEY KISS-ASS #1: He's a moron, boss. To see what those Democrats did to that loser Mitt Romney over his private equity career? And think that the Republican party needs to nominate another one?

ROMNEY KISS-ASS #2: I mean President Obama had terrible approval ratings in 2012, and the economy was still trash, but this idiot Mitt Romney couldn't even beat him. That's how toxic this private equity stuff is.

ROMNEY: I am so incensed with this Jeb Bush that I could drink a Coca-Cola soda pop, that is how incensed I am. I mean, heavens to Betsy, this party cannot afford another Mitt Romney in 2016. I'll have to run myself.

The idea must be that Romney's already been vetted. That there's nothing new for the public to learn about him, so the attacks on his Bain Capital record and generally plutocratic aura would fall flat.

Is that true? Does this seem like the sort of thing that would lose its potency? That swing voters who were turned off by these comments in 2012 would hear them again and think, "Ehh, that was a while ago"?

"There are 47 percent of the people who will vote for the president no matter what," Romney said in the video. "All right, there are 47 percent who are with him, who are dependent upon government, who believe that they are victims, who believe the government has a responsibility to care for them, who believe that they are entitled to health care, to food, to housing, to you-name-it. That that's an entitlement. And the government should give it to them. And they will vote for this president no matter what.

"And I mean the president starts out with 48, 49 percent … he starts off with a huge number," Romney continued. "These are people who pay no income tax. Forty-seven percent of Americans pay no income tax. So our message of low taxes doesn’t connect. So he’ll be out there talking about tax cuts for the rich. I mean, that’s what they sell every four years. And so my job is is not to worry about those people. I’ll never convince them that they should take personal responsibility and care for their lives."