The magic of Tina and Amy: Here's why this duo is so good at hosting awards shows

On the eve of their third and final Globes gig, some thoughts on what makes them the best team in the game 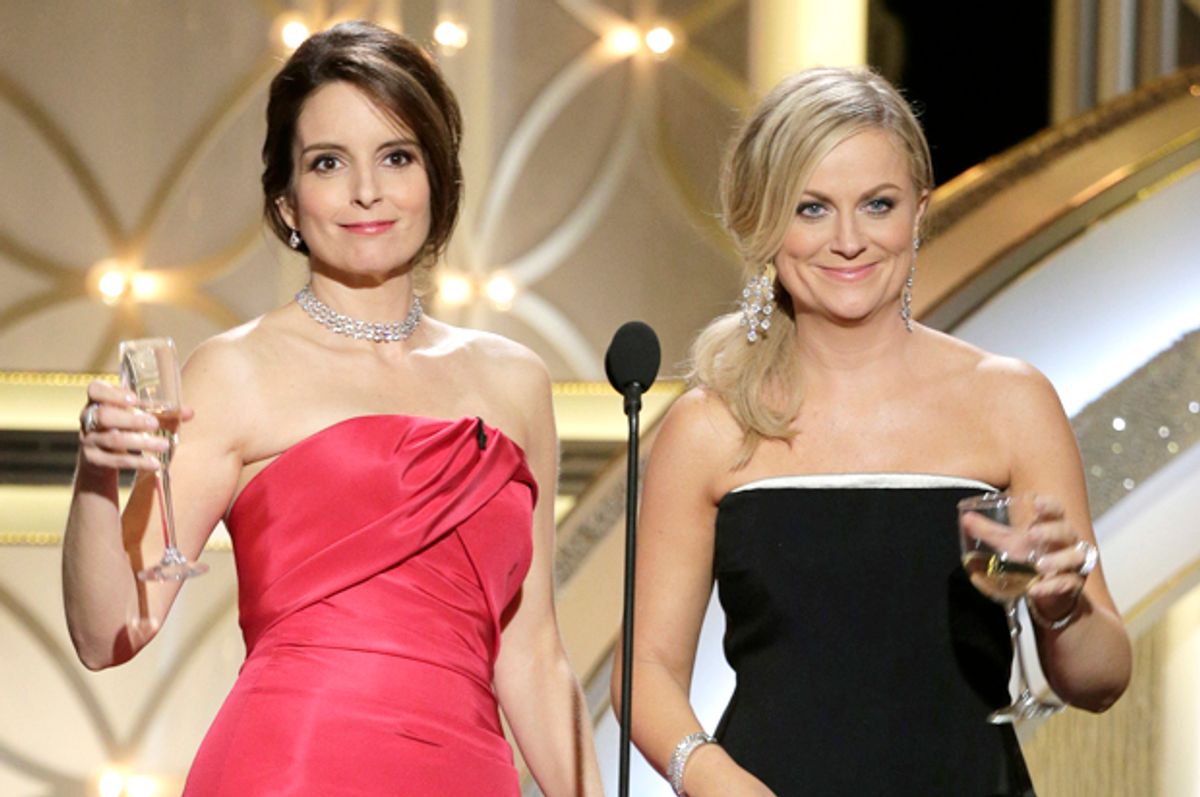 Already the boozy, good-time cousin of the relatively restrained Emmys and Oscars, the Golden Globes have been infintely more watchable the last couple of years thanks to hosts Tina Fey and Amy Poehler. As they enter their third and final turn on Sunday hosting the Hollywood Foreign Press Association’s champagne-fueled TV and film love-fest, prospective future hosts might find themselves a little nervous about the future. Fey and Poehler are clearly a lot to live up to.

Compared to previous host Ricky Gervais, who wasn’t invited back after a set of blistering jokes in 2011 that included mocking Robert Downey Jr.’s drug addiction, Fey and Poehler are irreverent and smart but not gratuitously mean, working the line between knowing insider and bratty peanut-gallery with just the right balance of wink and shrug.

Their Golden Globes magic pre-dates their hosting duties. In 2012, Fey’s sly photobomb of a winking Poehler, when the nominees for best actress in a television comedy or musical series were announced, went viral. As Emmys presenters in 2008, Fey played the knowing valedictorian, welcoming the audience in different languages, while Poehler played the gleeful slacker, affecting sloppy accents instead. In 2013, they performed a hilarious guest bit, defending their own hosting supremacy by heckling host Neil Patrick Harris:

As hosts of the Golden Globes, they play off each other brilliantly. In their 2013 monologue, both up for the Best Actress in a TV comedy award, they poked fun at their non-existent rivalry, making ridiculous sport of the competitive female frenemy narrative. “You’re my nemesis,” said Fey tenderly, brushing the side of Poehler’s face. Of course, when Poehler won for the first time last year for her work as Leslie Knope on “Parks and Recreation,” Fey’s glee was palpable.

Even when their jokes are barbed, they’re skilled at making it look like they single personalities out for teasing because they’re special, not because they’re inherently ridiculous, and they have a knack for turning a joke about a person in the room into a joke on someone absent. Fey, in 2013 to Anne Hathaway on her “Les Miserables” performance: “I have not seen anyone that totally alone and abandoned since you were on stage with James Franco at the Oscars.” Poehler, the same year, to Kathryn Bigelow: “I haven’t really been following the controversy over ‘Zero Dark Thirty,’ but when it comes to torture, I trust the lady who spent three years married to James Cameron.” Except when the target can totally take it like during an off-hand celebrity roll-call moment when Fey quipped, “Quentin Tarantino is here, the star of all my sexual nightmares.” He seemed delighted.

Awards shows are notoriously bloated messes of butt-kissing and ridiculous pomp, but Fey and Poehler openly mock that tone through small gestures, like genuflecting while they announce “Daniel Day-Lewis is here” in 2013 and telling Matt Damon last year that he was “basically a garbage person” compared to the star wattage in the room. They’re not afraid to get political on Hollywood gender roles, striking the right tone (no “We Saw Your Boobs” Seth MacFarlane doofiness there) with 2014’s commentary on Meryl Streep’s performance in “August: Osage County” as proof that “there are still good parts in Hollywood for Meryl Streeps over 60” and remarking on the praise for Matthew McConaughey’s physical transformation in “Dallas Buyers Club” when he “lost 45 pounds, or what actresses call ‘being in a movie’.”

When they’re making personal jokes, they punch up: they brought down the house last year with a joke on “Gravity”: “the story of how George Clooney would rather float away into space and die than spend one more minute with a woman his own age.” They invited the audience to give “a supermodel’s vagina” warm welcome to model magnet Leonardo DiCaprio.

Even their weird little interstitial bits are inspired, like their boozy heckling of Julia Louis-Dreyfus last year when she was nominated in both TV and film categories ("Well, well, well, look who slithered back over to the television section!") and poking fun at the goofy Miss Golden Globe tradition by dressing Poehler up as "Mr. Golden Globe," Fey's “adult son from a previous relationship,” roaming the aisles, trying to figure out who her real father is.

Citing the famous comedy “rule of threes,” Poehler and Fey have declined to host a fourth year, and while it's sad to see this particular set-up end, it's also admirable when artists know when to go out on top rather than drag out a success until it's no longer fun for anyone. Topics to watch them apply their intellect and timing to this year include some serious Hollywood issues, like the Sony hack and Bill Cosby’s sexual abuse scandal (“oh heck yes, says Fey), as well as some of the more absurd corners of the industry (see also: lots of material from the Sony hack). Fey claimed this earlier this week that they hadn’t written a thing yet, but said, “I’m ready. I’m bringing it.”