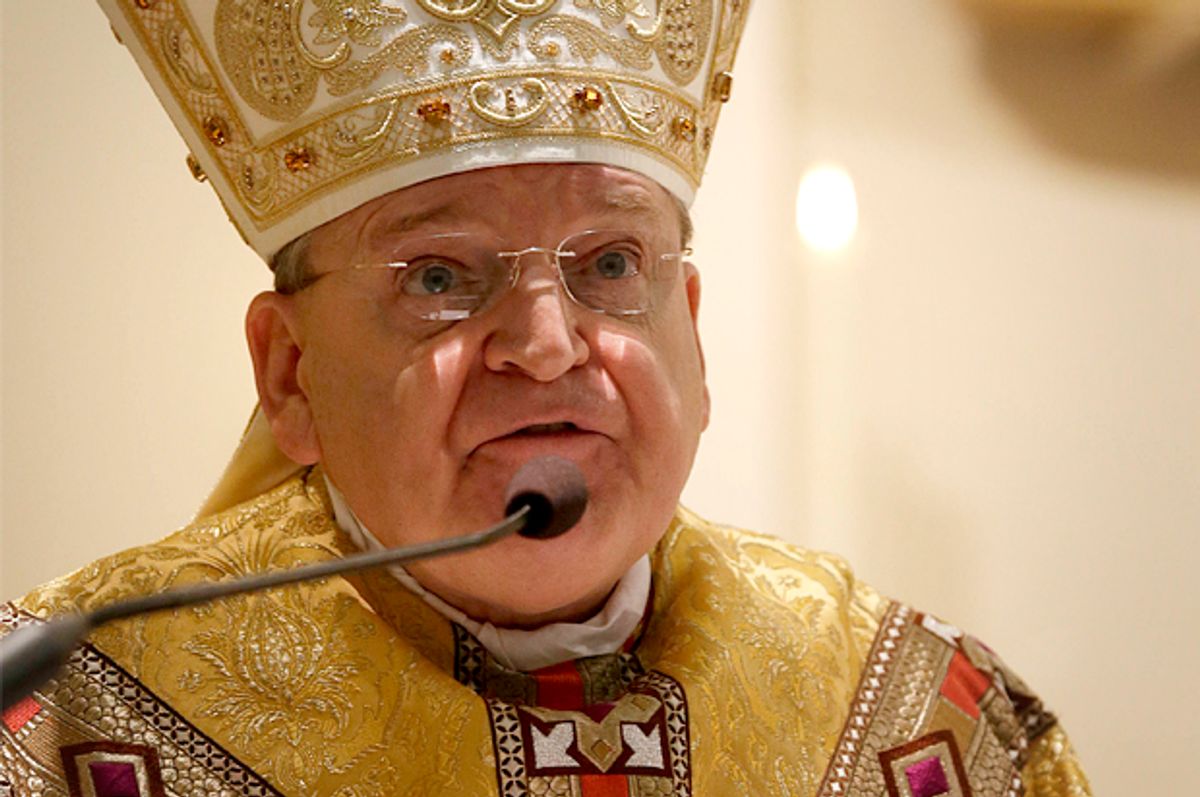 You know when you break up with someone and you have those dark moments of nostalgia and think, "Maybe he wasn't so bad?" And then you hear about some ridiculous, just so goddamn typical thing he's done and you remember, "Oh, riiiiiiight. This is why I broke up with you." I imagine this is roughly what Pope Francis is feeling this week, after Cardinal Raymond Leo Burke's recent comments.

The Cardinal was not so long ago the highest-ranking American at the Vatican, a favorite of Pope Benedict and the Prefect of the Supreme Tribunal of the Apostolic Signatura. But he was not as warmly received by Benedict's exponentially less conservative successor Francis. Burke's stance on numerous issues – and his hard line way of expressing himself – did not win him any favor with the new regime in Rome. Last year, Burke called gay relationships "profoundly disordered and harmful" and took issue with the pope's assertion of "Who am I to judge?" gay men and women as "false praise." In October, he gave an interview with a Spanish magazine in which he called the Church, under its new leadership, "a ship without a rudder." This is like calling your boss a jerk on your Facebook page, except your boss is the leader of one of the largest and most powerful religions in the world. Psst.... it's going to get back to him. In November, Frances, exhibiting all the chill he honed as a nightclub bouncer in Buenos Aires, removed Burke from the Tribunal and gave him a kiss-off gig as chaplain of the charity group Knights of Malta. Who's your rudder NOW, mofo? (Note: The pontiff probably didn't use those exact words when the cardinal received his new appointment, but in my mind that's how the scene went down.)

Now Burke, like that guy on Tinder who did not take your polite rebuff well at all, has emerged on an uproariously named venture called the New Emangelization Project. As far as I can tell from the group's description, it aims to combine the old school repressiveness of Catholicism with the foaming dude rage of the men's rights movement. It promises "male focused events, led by men," because if there's one organization in the world that isn't male focused enough, sure, it's the Catholic Church.

In his recent interview, Burke blamed many of the problems of the modern Church on the 1960s rise of "radical feminism," when the "goodness and importance of men became very obscured" and led to a "very feminized" Church. And that, he explained, meant that "There was a period of time when men who were feminized and confused about their own sexual identity had entered the priesthood; sadly some of these disordered men sexually abused minors; a terrible tragedy for which the Church mourns." That's right – the reason that the Church has been so plagued by sexual abuse isn't because of the abusers themselves, or an institution that systematically covered up their crimes, it's feminism.

Burke went on to grouse that "Apart from the priest, the sanctuary has become full of women… The activities in the parish and even the liturgy have been influenced by women and become so feminine in many places that men do not want to get involved. Men are often reluctant to become active in the Church. The feminized environment and the lack of the Church’s effort to engage men has led many men to simply opt out." He bemoaned how the church has to "constantly address women’s issues at the expense of addressing critical issues important to men … the critical impact of manly character; the emphasis on the particular gifts that God gives men." He added that in the past he's heard from men concerned about marriage because " These young men were concerned that entering a marriage would simply not work because of the constant and insistent demanding of rights of women. … Sadly, Church has not effectively reacted to these destructive cultural forces; instead the Church has become too influenced by radical feminism and has largely ignored the serious needs of men." He also denounced marriage equality, which "of course is not marriage at all" and said "The dark confusion of gender theory deceives people into thinking that they can create their own sexual identities based on urges and emotions." And for a kicker, he called masturbation "lethal for men."

If I'd read an interview like this a few years ago, I'd probably have had a rage stroke. But right now, I think it's a hoot. Because, okay, this person still has a cushy job and he still gets to say his crazy, but stick a fork in him; he's done. He's obsolete. He's almost too lame even for his own religion now. He's stuck giving interviews to the saddest demographic on the Internet – crabby, butthurt guys. And it is at this point I like to imagine the pope, reading this crap and texting "LOL WTF???????" and then a gif of Oprah rolling her eyes to his besties.

The Catholic Church has a long, long, long way to go in terms of reform. But it is undeniably moving in the opposite direction of sorry fossils like Raymond Leo Burke, who've been literally moved to the sidelines to nurse their sacramental whine. That's not a "man crisis." That's called progress.